The theme of Green Week this year was climate justice, the idea that industrialised countries have caused climate change through fossil fuel use, but it is the least developed, poorest nations who are suffering the most from impacts.

We enjoyed a number of thought-provoking and interesting video messages during assemblies and tutor classes. Richard Grimes of Pure Clothing told us how the fashion industry is the second highest polluting industry globally. Fiona Smiddy from Green Outlook gave us tips for tackling the climate crisis. Lyndsey O’Connell from VOICE Ireland showed us some single use plastic ‘swaps’ we can make.

The second Years on the Green Schools Committee produced an educational video on climate justice and tips to reduce energy use which the whole school watched on Friday.

Students were tasked with creating a model of a famous world landmark using only items found in their bins. The winner, Third Year Luke Barnard, made a model of The Leaning Tower of Pisa with used Nespresso pods. 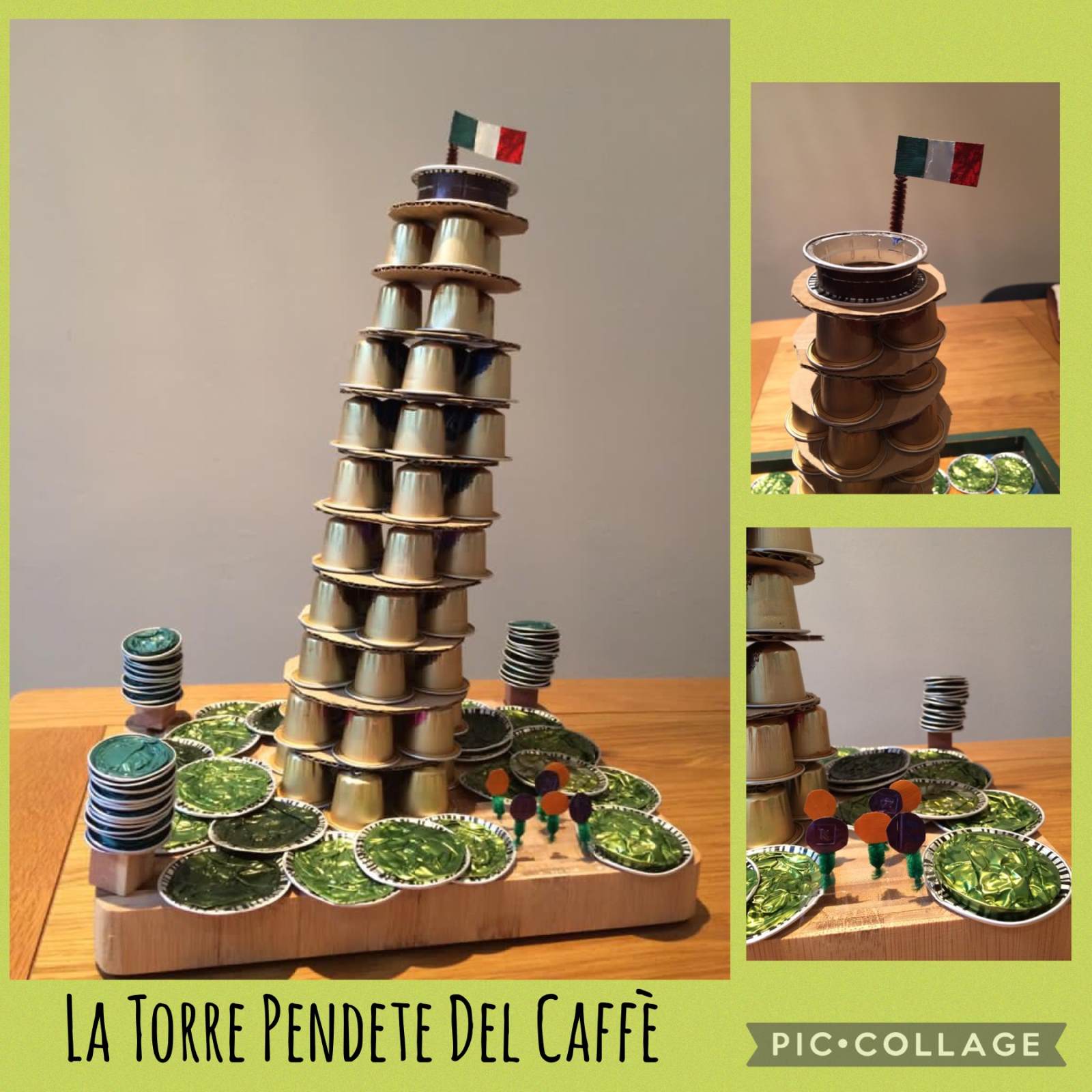 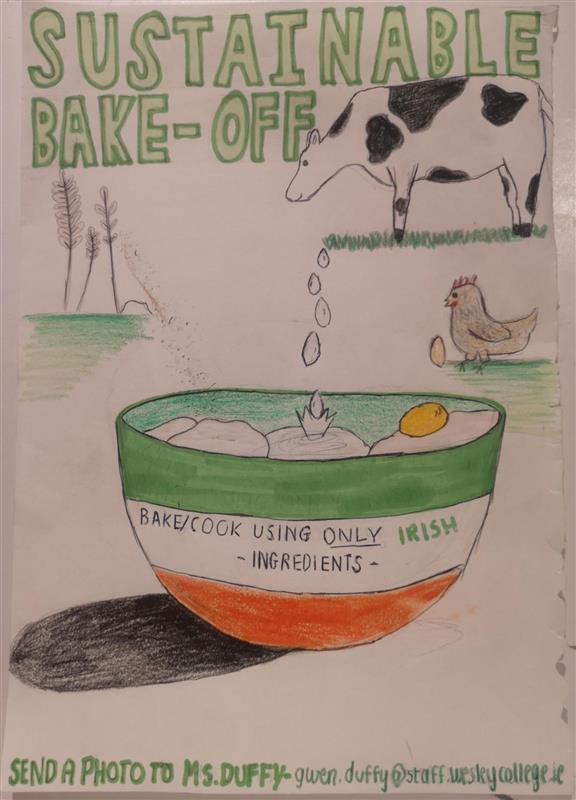 Students had to create baked goods using only Irish ingredients. Tara Quigley from Preps was the winner with her “BEE sustainable, Honey Cupcakes”. Tara even substituted Irish honey for sugar! In 2nd place was First Year Teagan Lawlor with Raspberry Flapjacks and in 3rd place was Fourth Year Anna Forbes with a Victoria sponge cake. 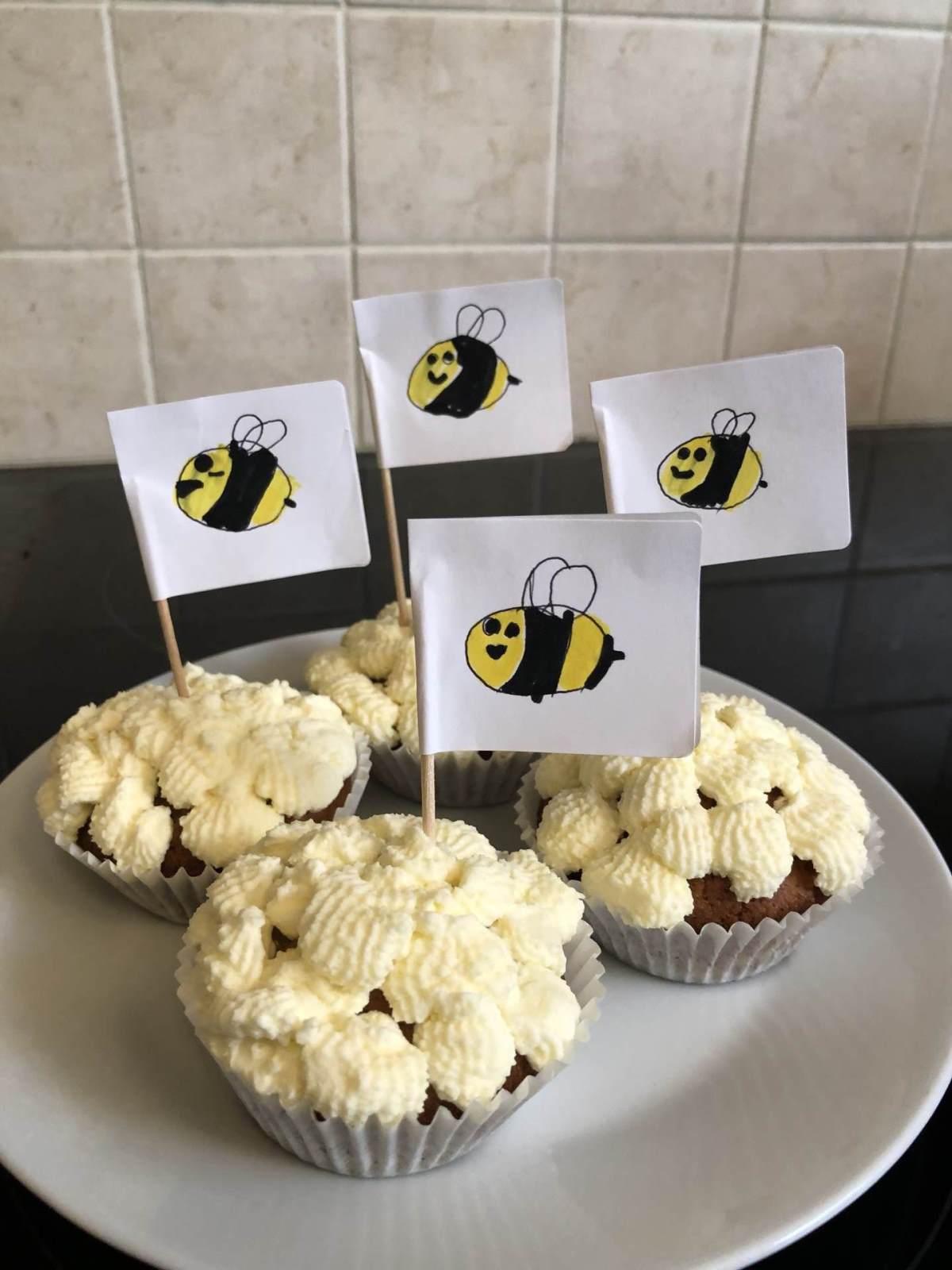 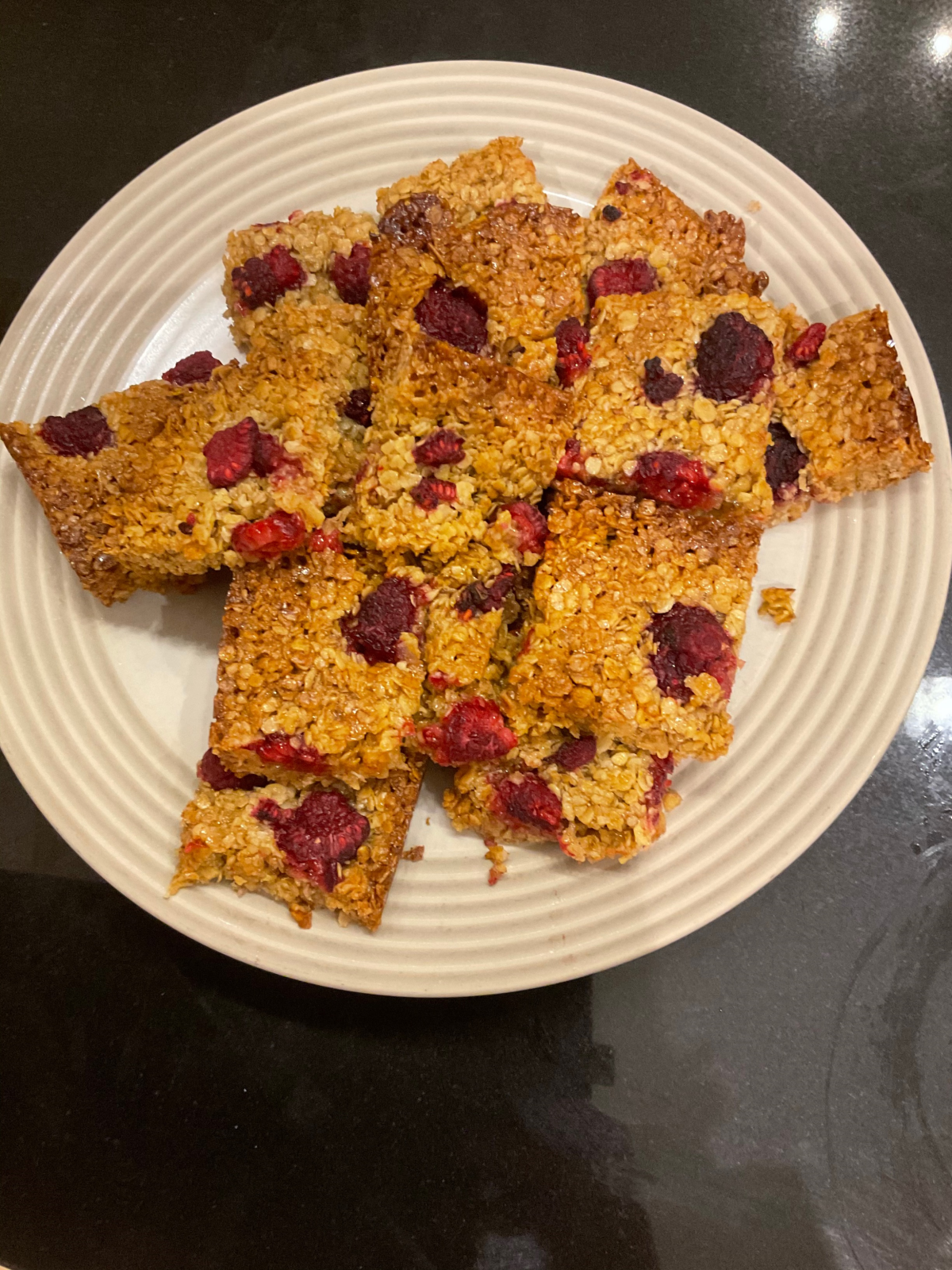 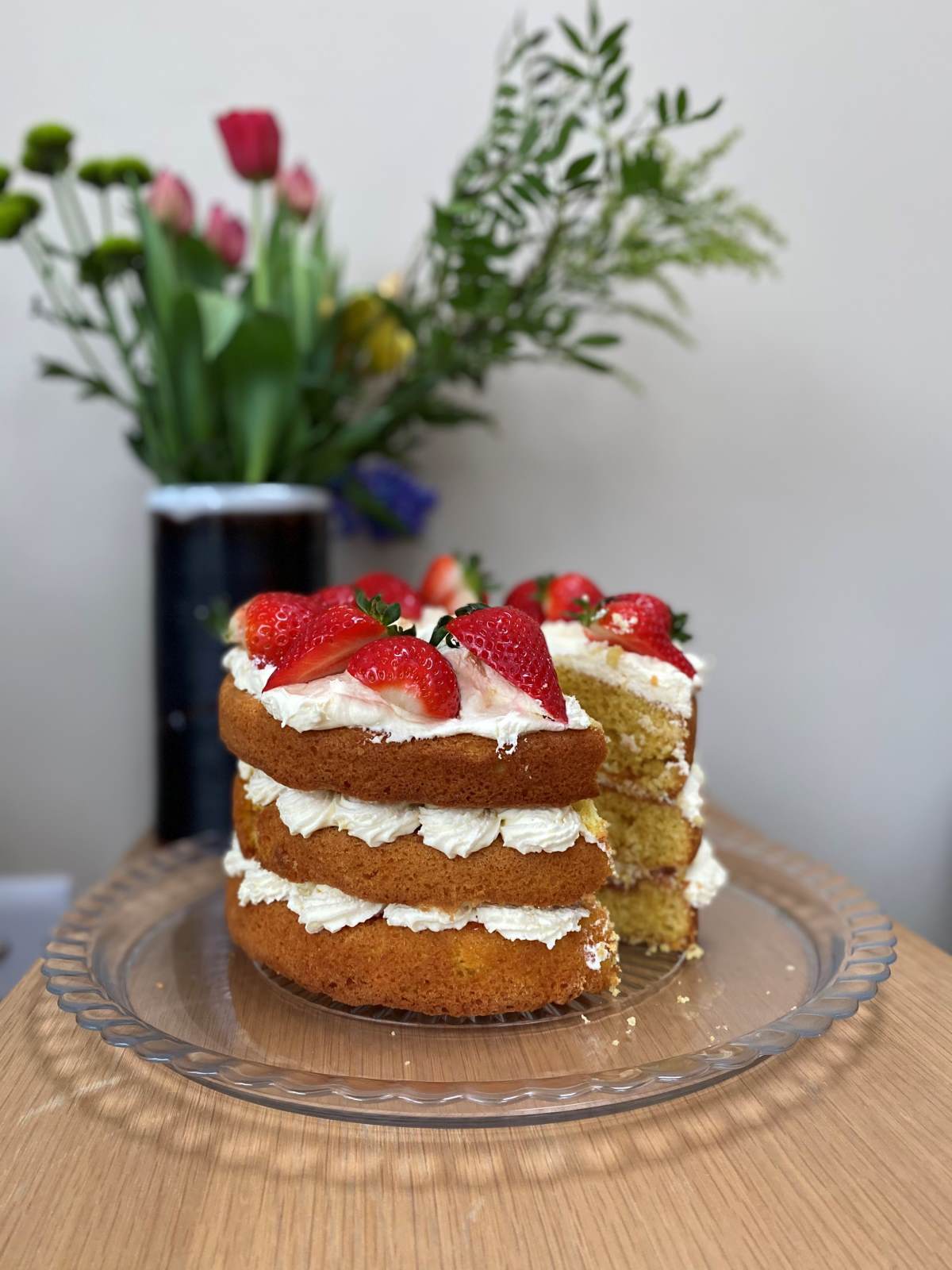 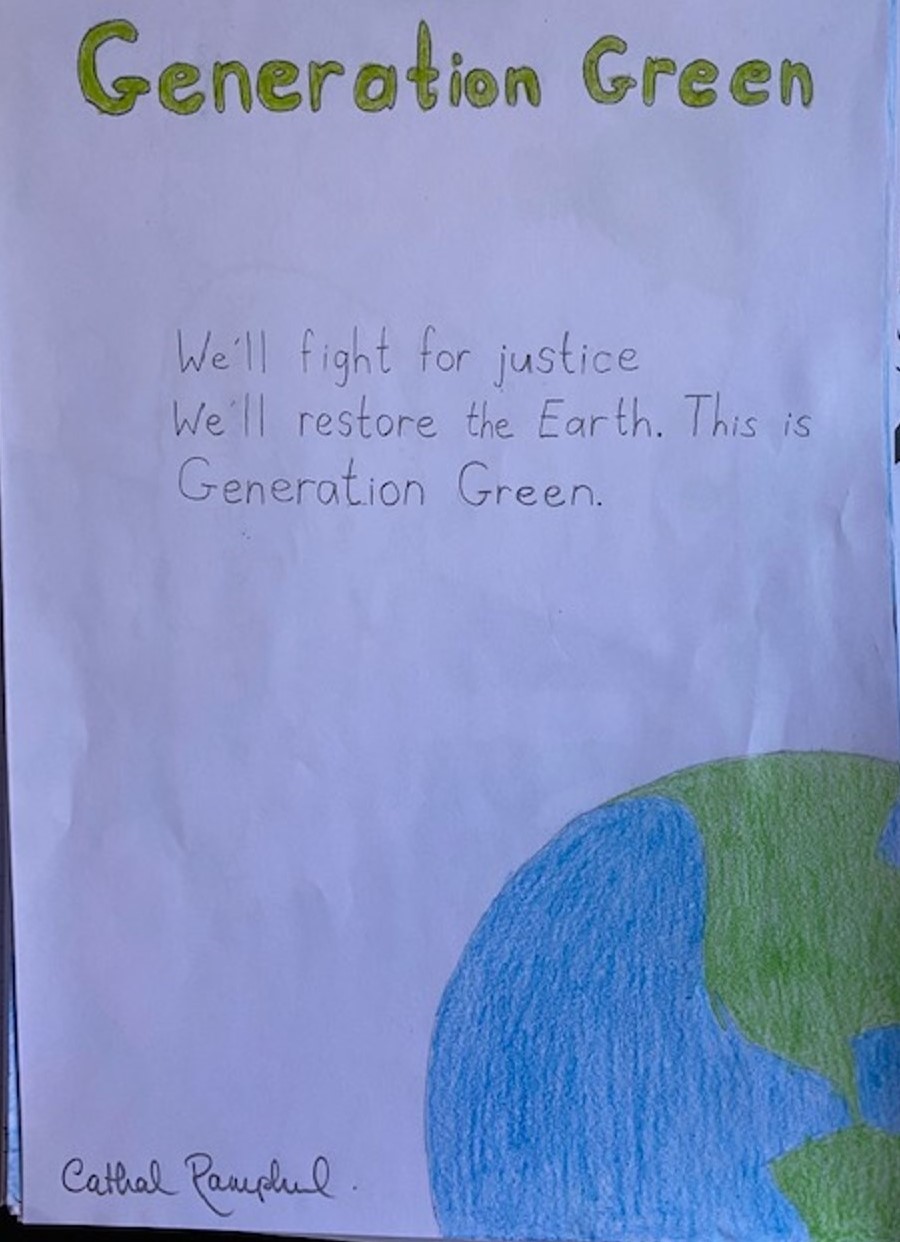 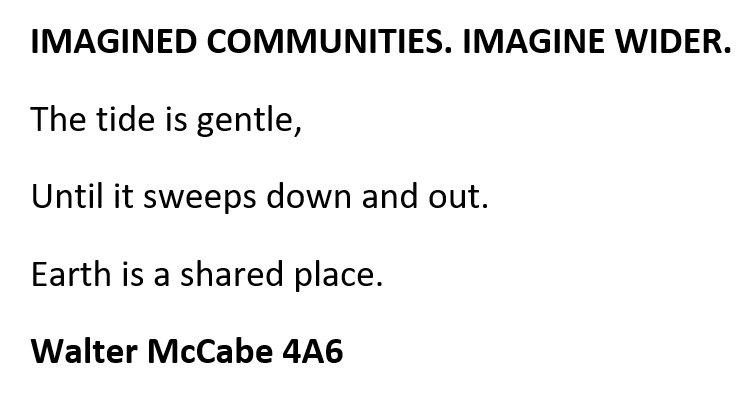 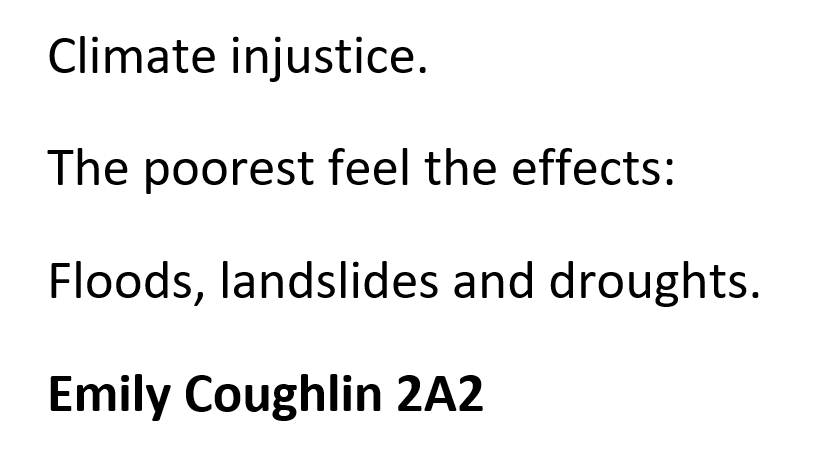 The week ended with each student making an ‘energy pledge’ in tutor classes. Everyone reflected on what they had learned during the week and chose one action to take towards a more sustainable lifestyle. This was followed by a very competitive whole school Kahoot energy quiz with 4A4 being crowned winners.

We had two entries to the Rediscovery centre’s “Relove” fashion competition this year. Well done to individual entrant Imogen Stanley and group entrants Mia Fromholz, Mia Keane, Ella Walshe and Jessica Woods on their fantastic upcycled outfits as pictured below. 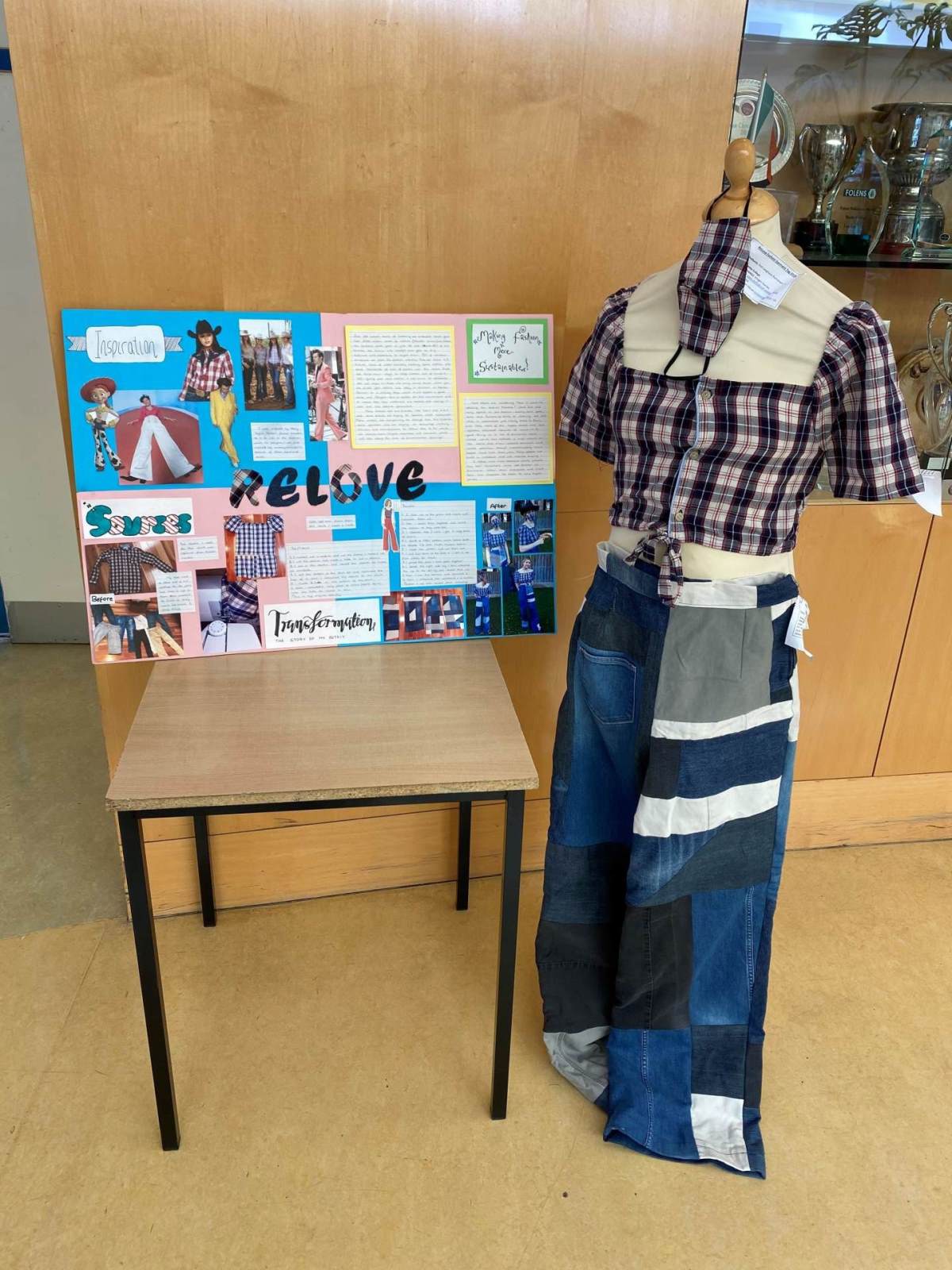 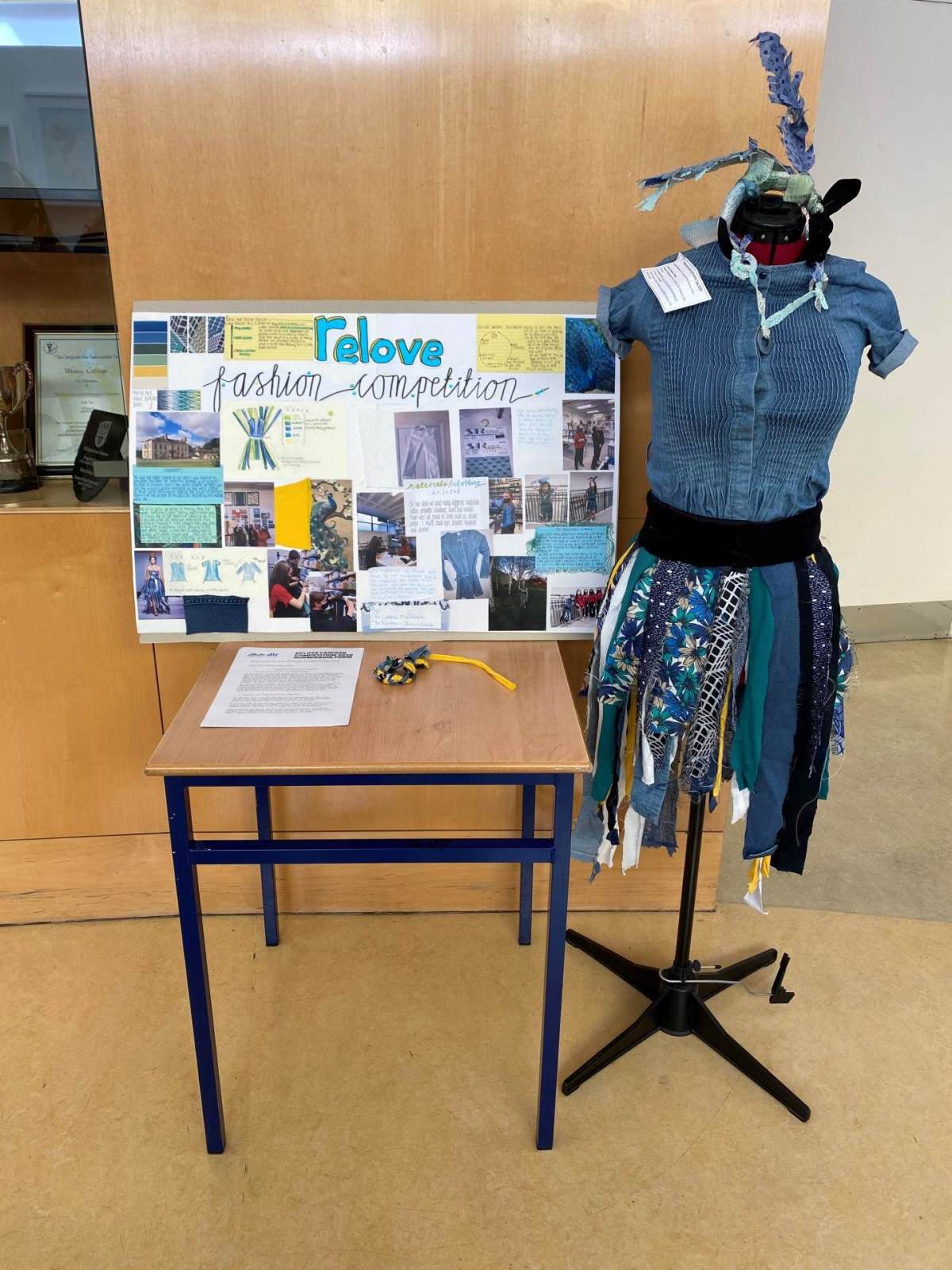 As a reward for entering, members of Green Schools were treated to a fantastic virtual workshop on the issue of “fast fashion” by The Useless Project. We learned about the ethical and environmental impacts of the fashion industry and were given tips for how to shop more sustainably.

“We were told about the problems of sustainability, materials, exploitation of labour and water pollution in the ‘fast fashion’ industry. Shopping second hand and sustainable clothing brands were discussed including how to look out for brands that are falsely stating claims. The workshop was followed by a Q&A where our queries were answered. We all took something out of it that we can include in our everyday habits and are grateful we got the opportunity to attend.” – Mya Adams 5th Year

As part of the Committee’s work towards our next Green Flag on Energy and Global Citizenship ECO-UNESCO facilitated a virtual workshop on climate justice. Students participated in quizzes, games and interesting discussions. They hope to use their new skills to educate the whole school on how climate change is not only an environmental issue but also a human one.

The Green Schools Committee have been busy selling Wesley hydro flasks as part of the school’s campaign to reduce single-use plastics on campus. The flasks are designed to last a lifetime and have reduced the number of disposable bottles on campus. They are engraved with an image of the Wesley wyvern protecting the Earth, designed by Juliet Arpac (class of 2020). One of the committee members, Second Year Dylan Walsh, kindly donated keyrings he made from recycled materials to every customer to personalise their hydro flask. 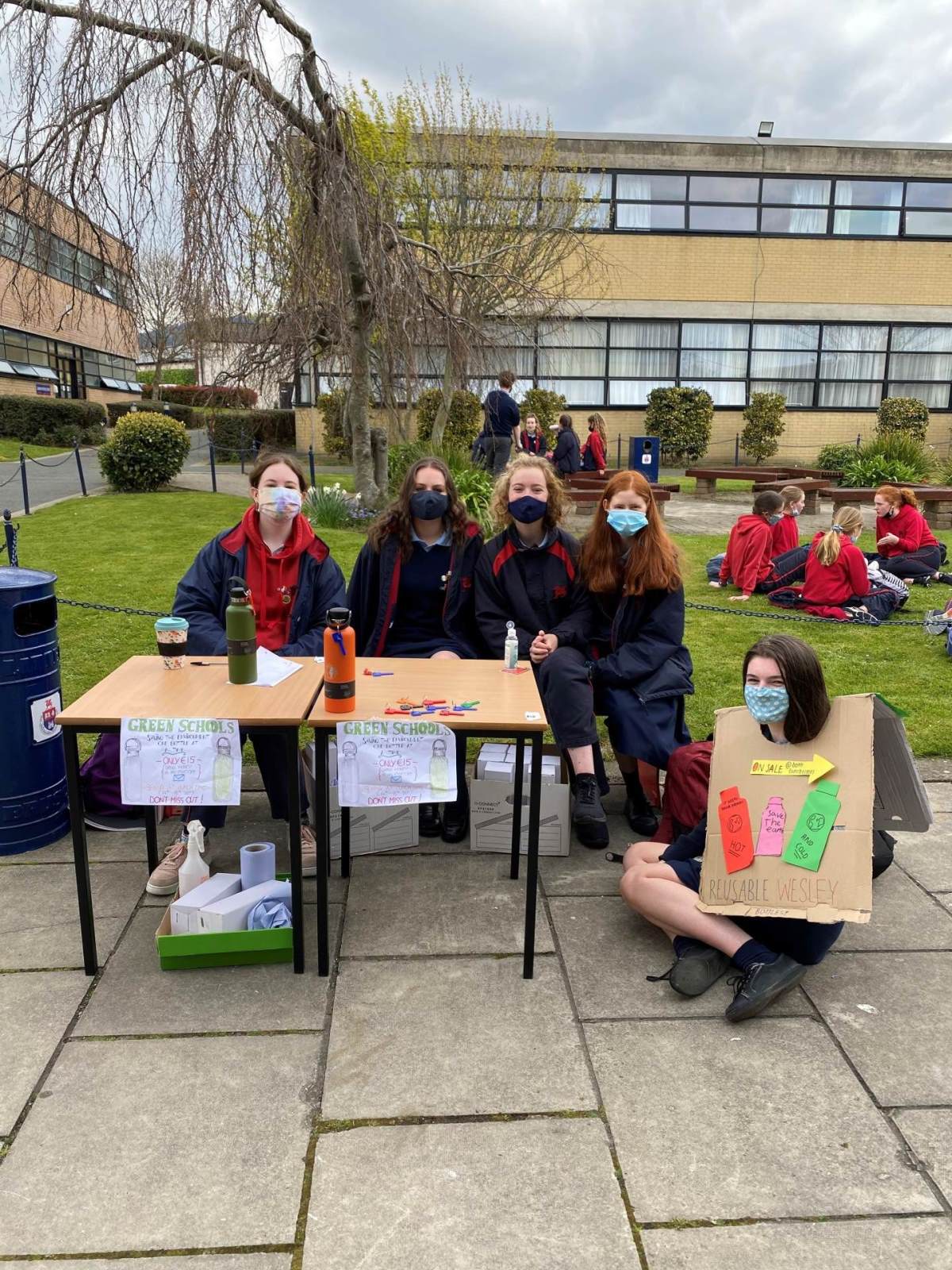 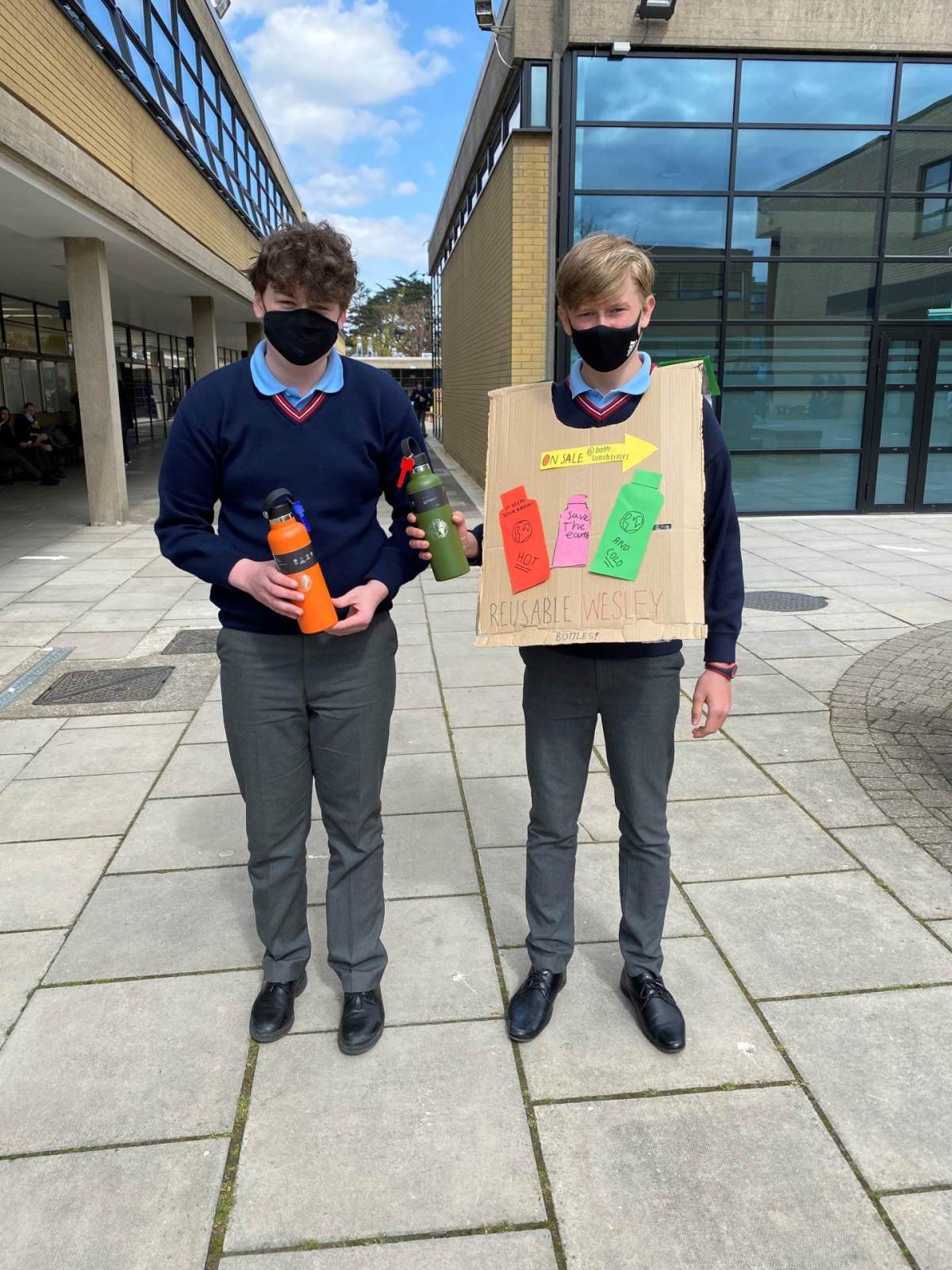 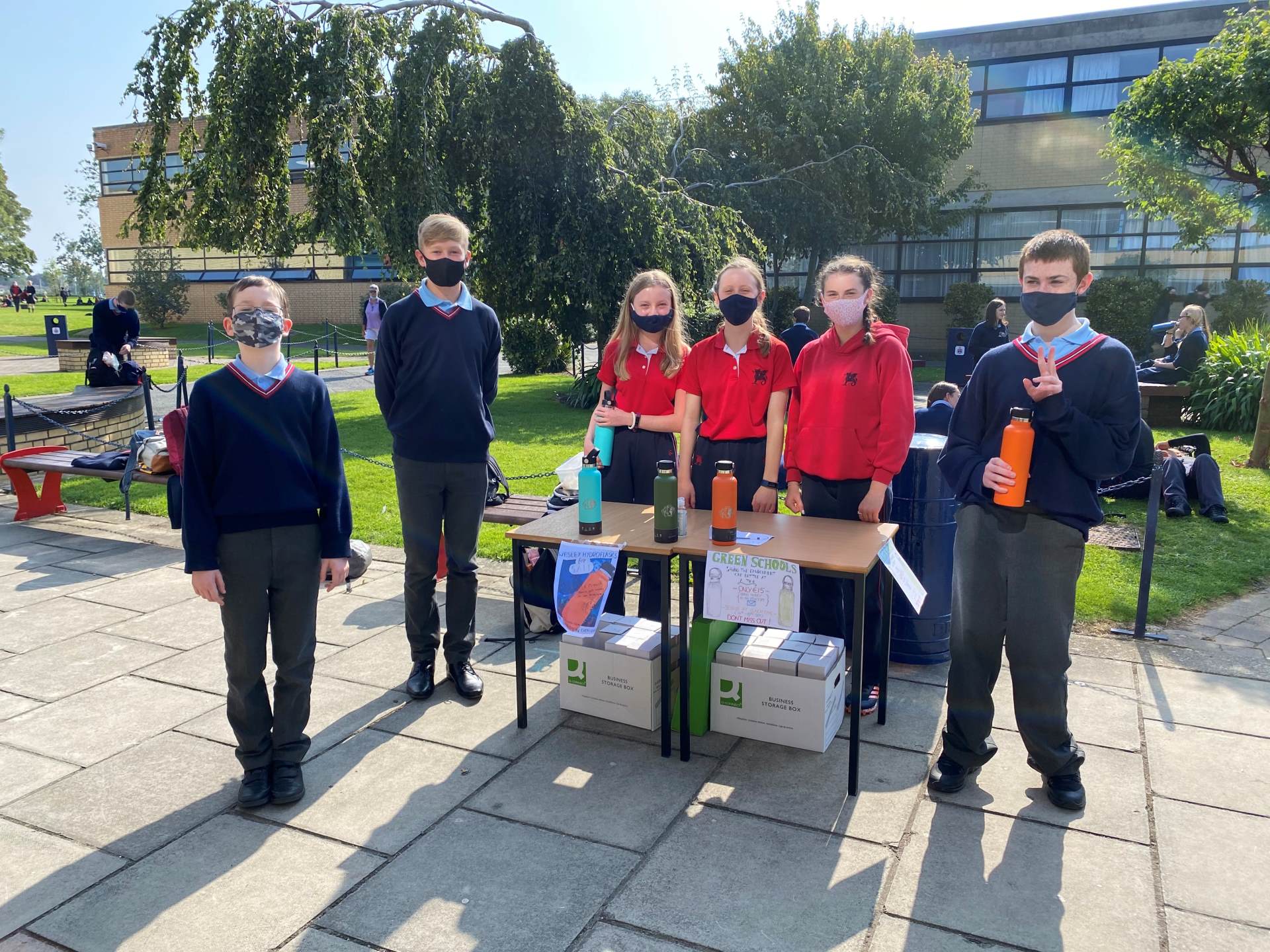 During National Biodiversity Week 2021 we announced Wesley’s commitment to further enhancing biodiversity around the campus. New areas have been selected to be managed as ‘wildflower areas’ where grass cutting will be reduced, allowing bee-friendly plants to grow. Other areas were chosen for new shrubs, flowers and trees to be planted to encourage more pollinators. In May the Committee held a ‘planting day’ where students and staff planted new shrubs and flowers on the school farm. A whole-school pollinator plan is being drawn up to examine other areas where biodiversity on campus can be improved in the future. 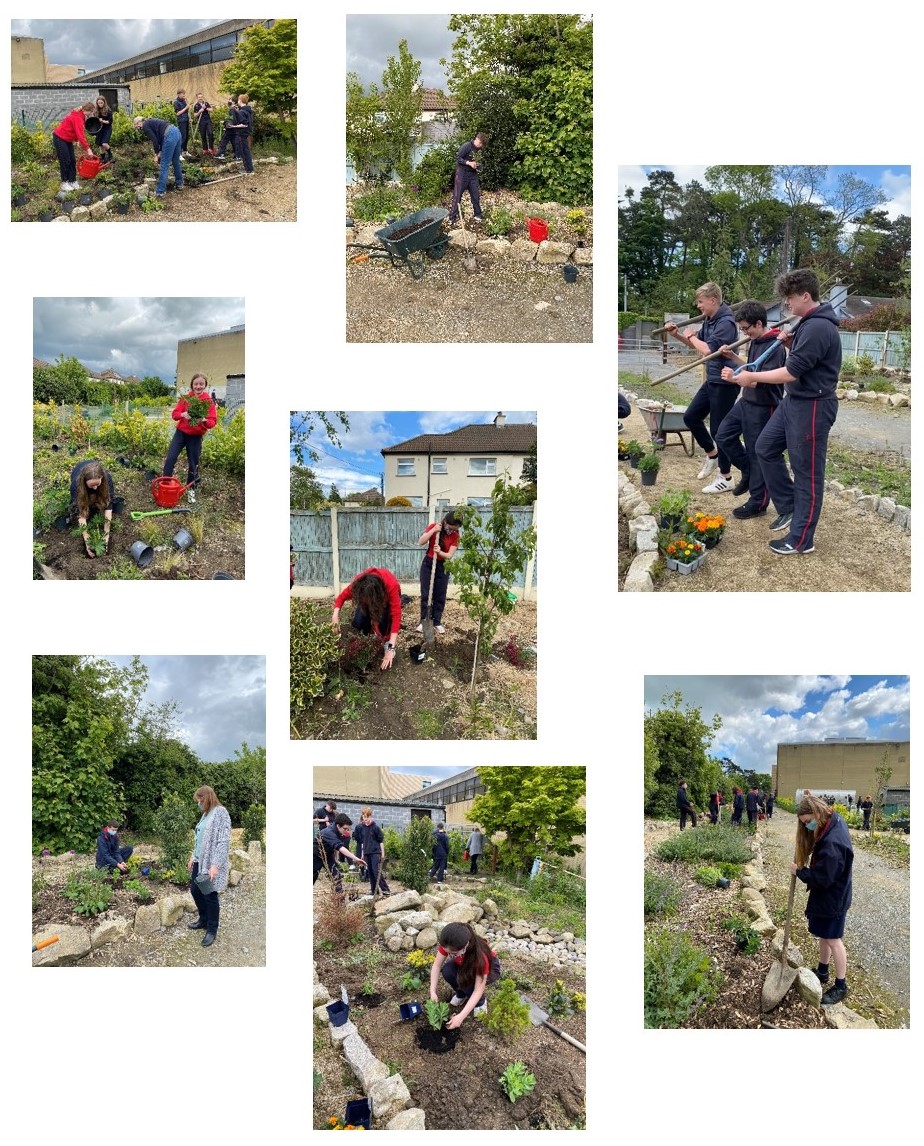