This Founders day, we are as proud of our students as ever, after a packed week of sport between hockey and rugby.

The SCT took on a strong Castleknock College side in their first league game of the year at home after what has been a long 18 months without any competitive fixtures. This match came off the back of a great win against St. Gerards in their last friendly before the league campaign kicked off. It was a fast start to the game with both teams looking to play at a high tempo from the off with some great back and forth play. Castleknock had the better of the opening exchanges and managed to make some of their pressure count on the scoreboard with some early penalties and a try in the corner.

Wesley settled back into the game thanks to some great control and tactical kicking from Jonny Cazzini and were proving very difficult to break down thanks to some great defence from captain Dan Campbell in particular. Wesley started the 2nd half how they finished the first on top and controlling the majority of the play and finally made their pressure count on the scoreboard after a superb well worked lineout maul was finished off by Tom Geoghegan who was having a superb game until he unfortunately had the leave the game later on due to injury, Johnny Cazzini converted from wideout on the left and it was game on with just a point between the teams. Unfortunately this was as close as Wesley got as they failed to capitalise on some good play and field position with penalties at different times stopping them from mounting any continued pressure with the score finishing up as 18-7 to Castleknock. Some great learnings taken from the squad and a first time for a number of players getting to put on the senior jersey for the first time as the league continues next Wednesday away to CBC.

Check out the gallery link below for more photos. 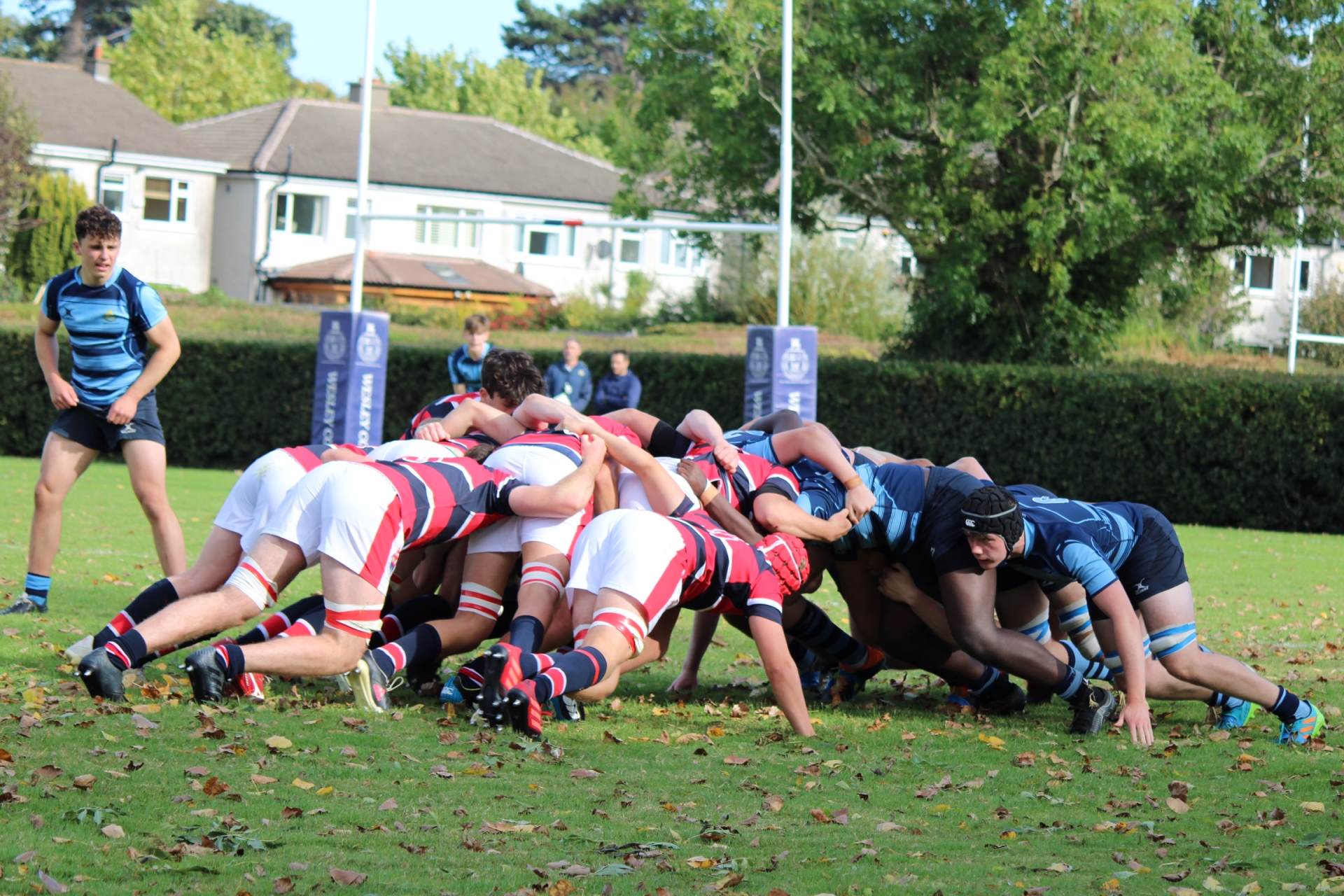 The Junior Cup Team for the 2020/21 season finally got their opportunity to take part in the Junior Cup in Donnybrook on Wednesday the 29th of September against CBC Monkstown.

The tie, when drawn in December 2020, was seen as a challenge to be embraced – the players had been training hard throughout the Christmas Lockdown, and when we finally returned to school, with this fixture at the forefront of their minds. Once the Juniors had come back from summer, they had two warm-up games, losing to St Marys, and drawing with St Gerard’s.

The day had finally arrived, and the players were prepared to take the field. CBC started strong, opening the scoring after 10 minutes, 0-7. The message sent on was to remain calm and look to get on the scoreboard. Winning a penalty after the kick-off, Wesley opted for the corner and scored a maul try with Finn O’Neill dotting the ball down, conversion missed 5-7. The remaining fifteen minutes of the half saw Wesley dominate possession and territory but failing to convert into scores. Half time, 5-7.

As the second half kicked off Wesley ramped up the pressure – off a scrum in the CBC 22, the Wesley backs orchestrated a move that sent Peter Montgomery through a gap and with great pace and footwork get over the line to score Wesley’s 2nd – conversion again missed, but Wesley were in the lead 10-7. CBC reacted immediately, winning a penalty, and opting for the posts, 10-10 with 15 to go. The next ten minutes would see CBC really get a hold of the game – scoring twice but failing to convert leaving the score at 10-20 with 5 to go. Wesley kicked off, and Ed Collins immediately caught the kick – giving them a platform to setup from in the CBC 22 and after 2 phases found Collins found himself under the posts – Charlie Hempenstall with the conversion - 3 minutes to go 17-20 down.

Wesley received the kick-off and won a penalty opting to go for the lineout in CBC’s half. The lineout was robbed with the clock in the red however loosehead Ryan Price managed to charge down the kick to touch by the CBC scrum half and Wesley saw a chance for them to have one last go. However, it was not meant to be as a knock on brought an end to proceedings.

Emotions ran high as the final whistle went, with Wesley players devastated to have not completed the grandstand finish. Nonetheless, this Junior Cup was an experience that at one stage did not look possible over the last year and the effort put in by the players was phenomenal – it is not the end for this group too as they move onto the Senior Rugby Cycle with experience of playing in the Junior Cup and what it takes to compete at these levels. A massive thank you to all of them for their efforts up to now.

Check out the gallery link below for more photos. 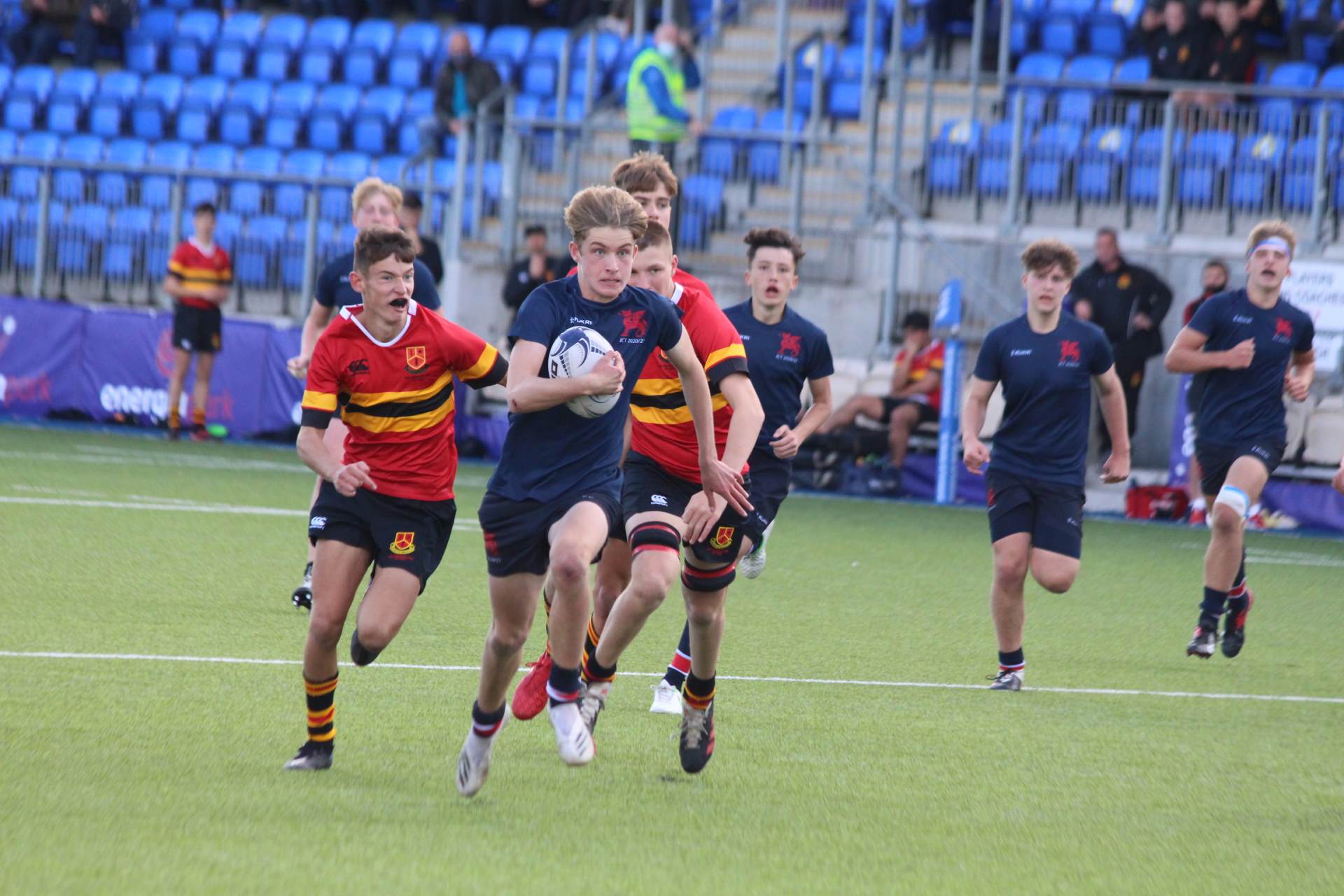 The Senior 1s had a convincing win, demonstrating an already strong team connection, varying their tactics and formation throughout the game to keep the opposition on their toes. Goals were shared out between Tara Galbraith, Mya Adams, Sinead O’Grady and Mikayla Power. 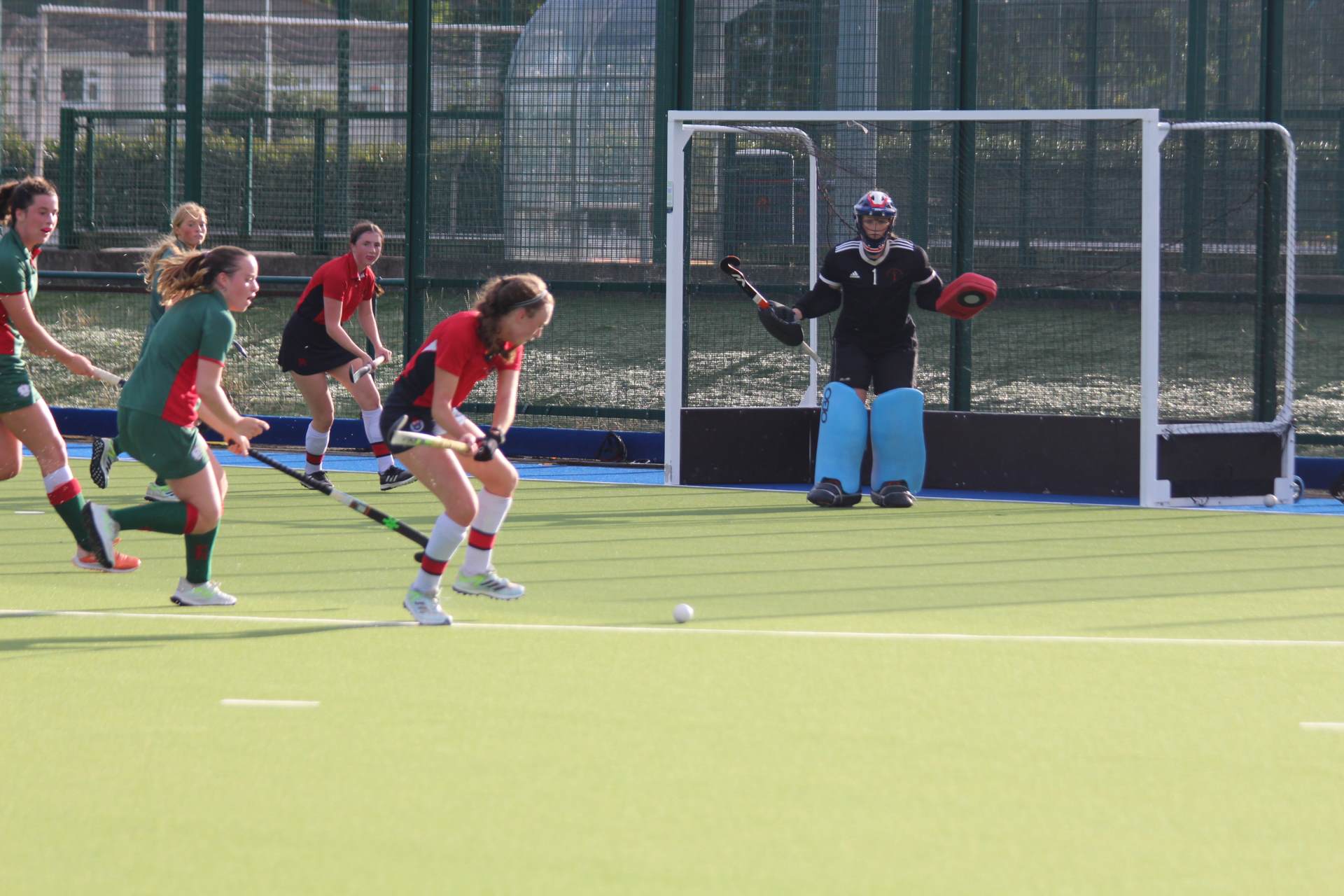 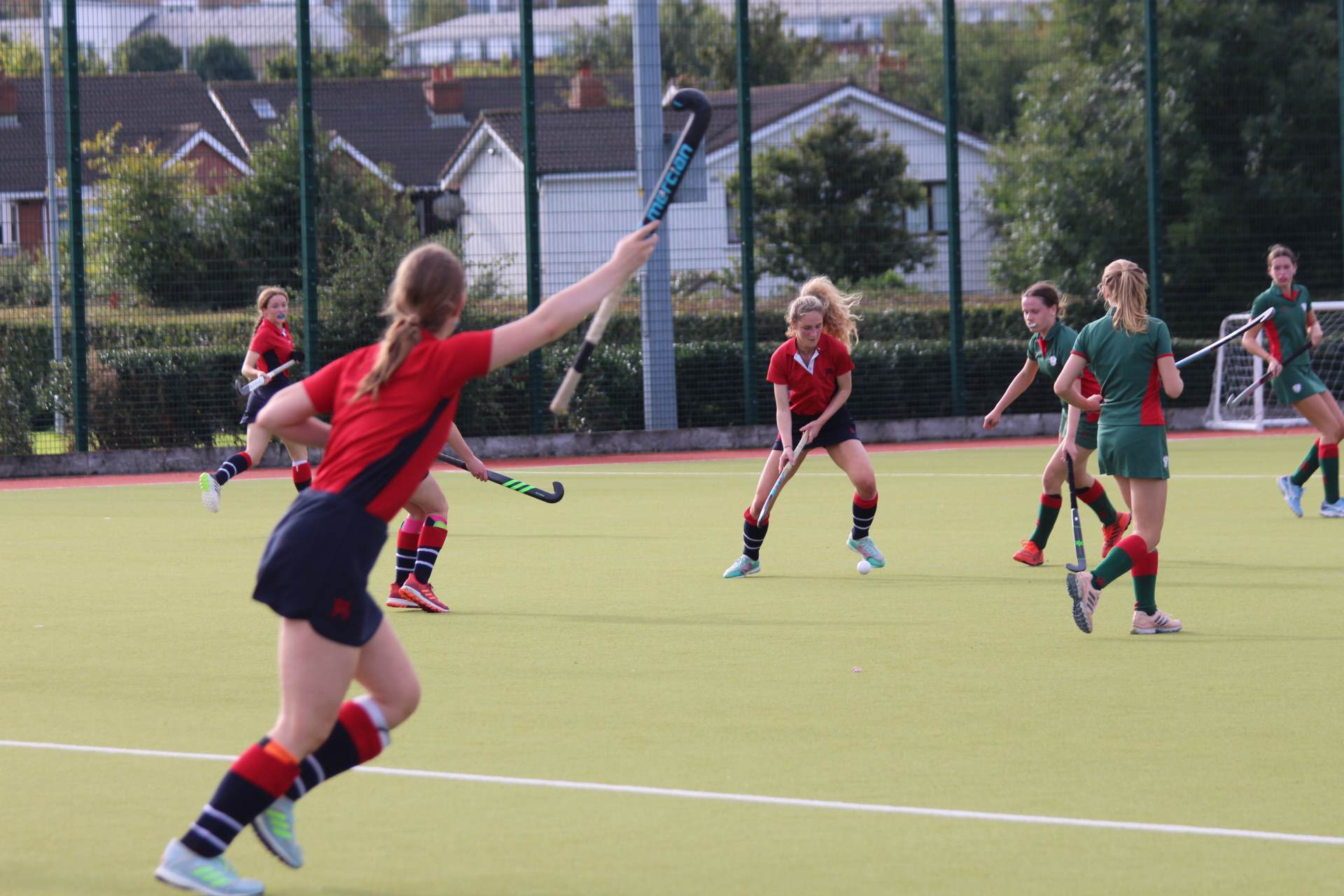 The Junior As played really well, building nicely on their win earlier in the week, making some serious improvement. There is still lots more to improve on going forward but a great start for this talented group. Goals on the day were from Milla Fulton, Juno Dockery and Sophie Stewart. 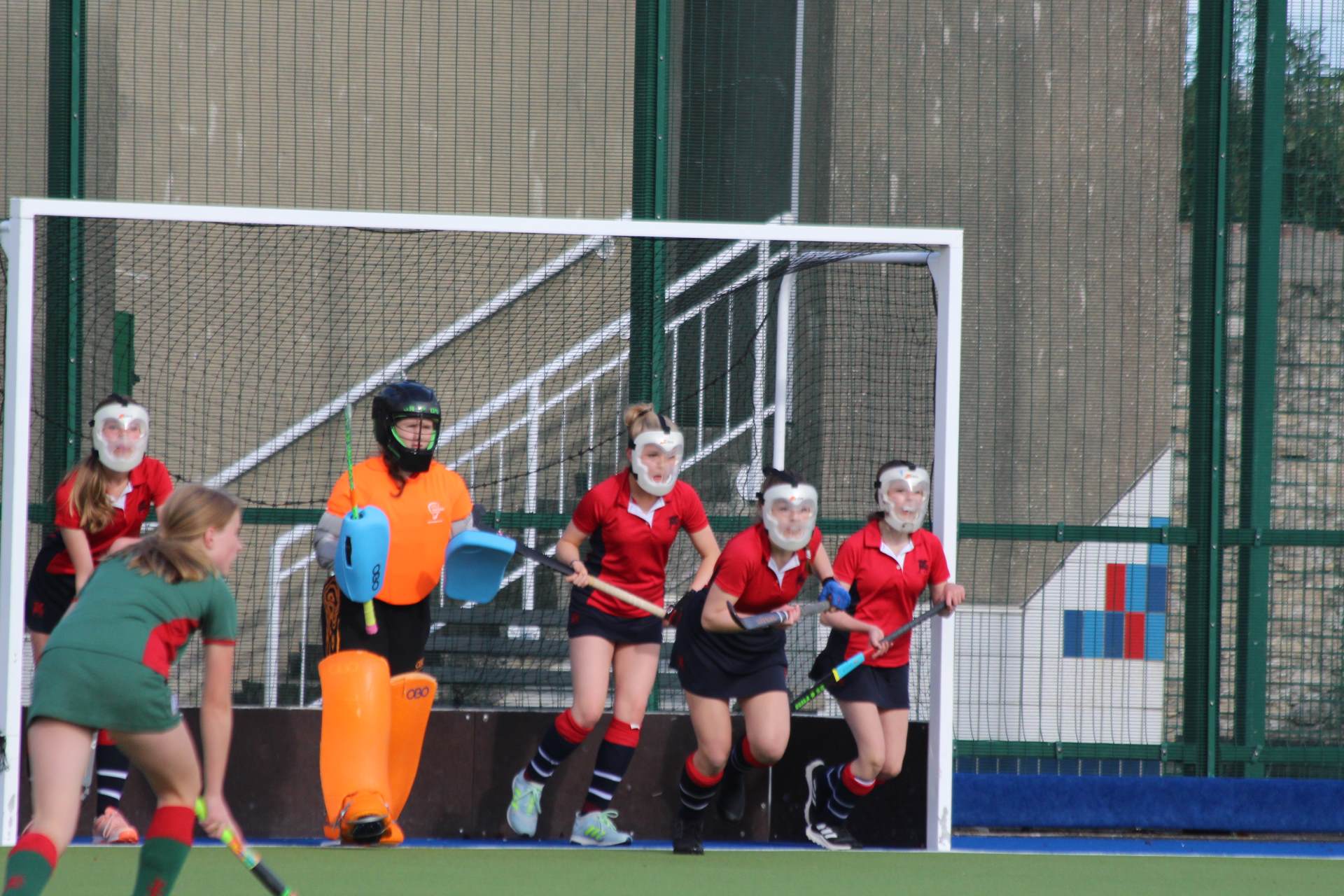 Junior A vs Holy Child Killiney

The B’s also had a strong start to their season with a 3-0 win. The forward line pounced on a number of loose balls in the circle which led to goals from Sophie Massey, Kirsten Cox and Cara Sexton. Cara was very strong in midfield and in defence we were very clinical in shutting out any threat from the opposition. Plenty to be optimistic about for the season if the girls keep training hard and stay committed. 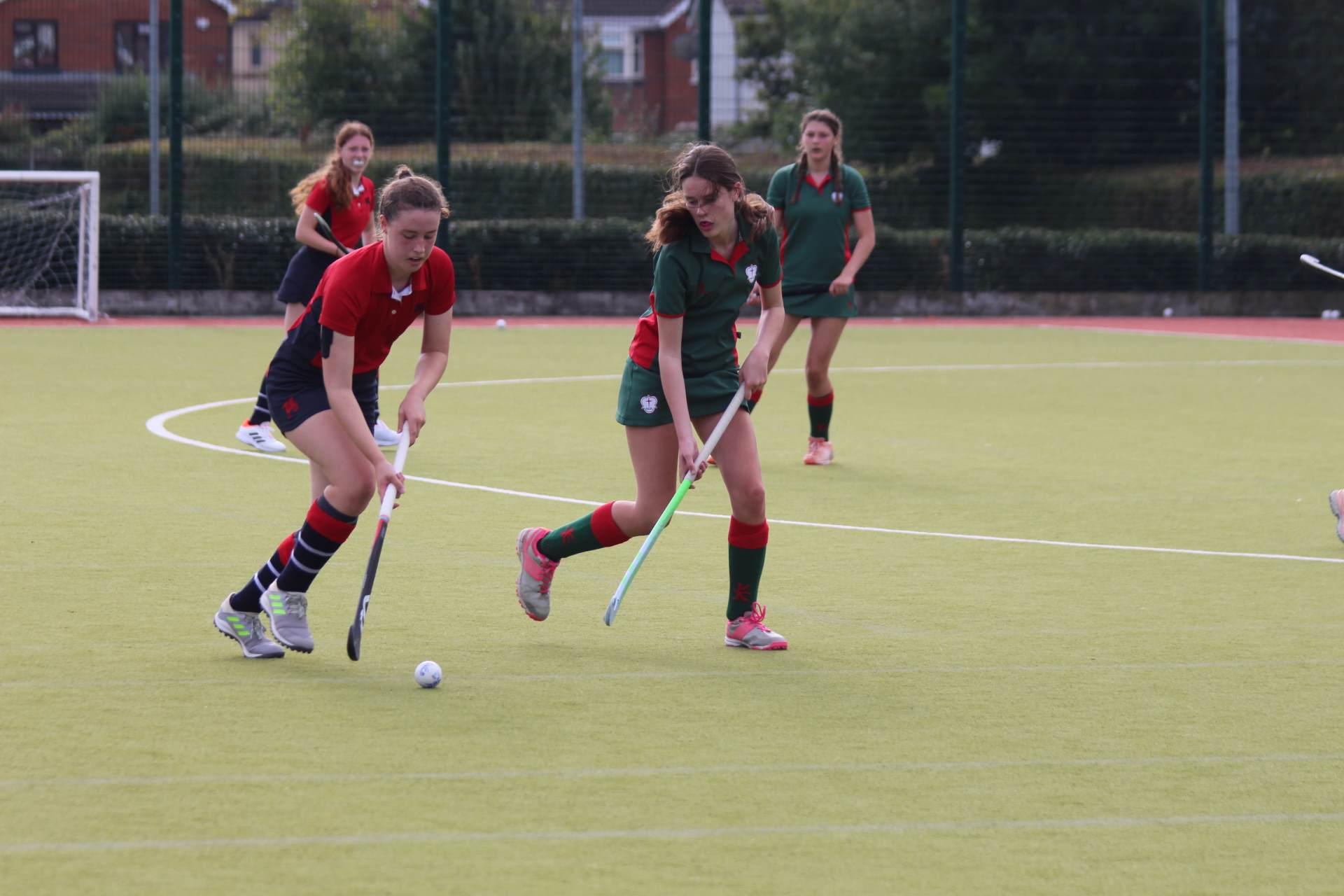 Junior B vs Holy Child Killiney

An exciting time for our Minor girls who donned the red jersey for the first time in a match against another school. With no subs, the As were not put off by the commitment needed and through aggressive play on both sides of the ball. We piled on the pressure in the final third early resulting in 2 goals from Tillyrose Burgess and Hannah Fox. We covered well from counter attacks and controlled midfield play throughout the game to come out on top. 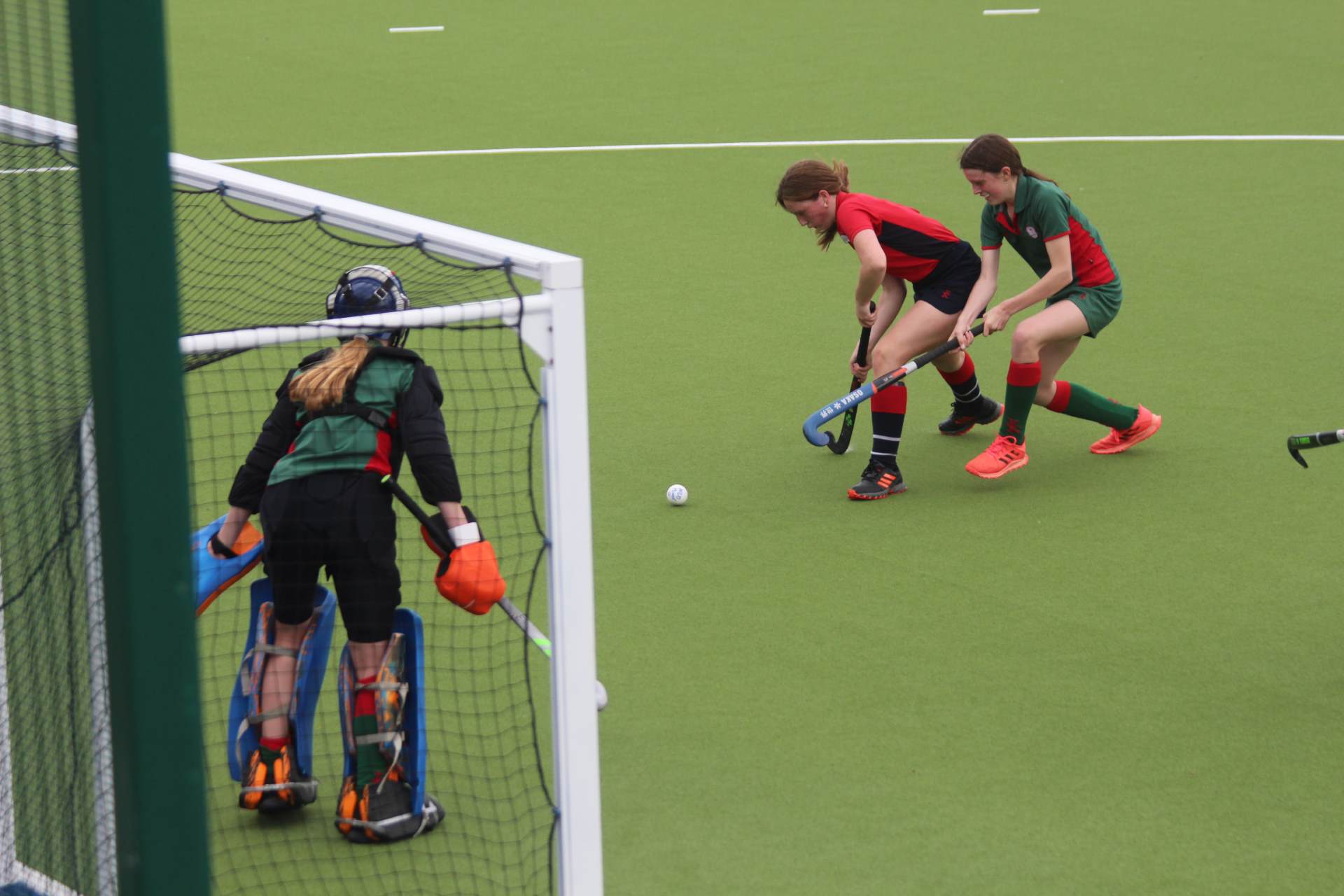 Minor A vs Holy Child Killiney

The Bs had a great 2-0 win, with goals scored by Rachel Reed and Brooke Burke Mellon. It was a really good start to the girls season and a huge effort was put in by every player. It was a very impressive team performance for their first competitive match in 18 months and their very first 11 a side match with Wesley College. 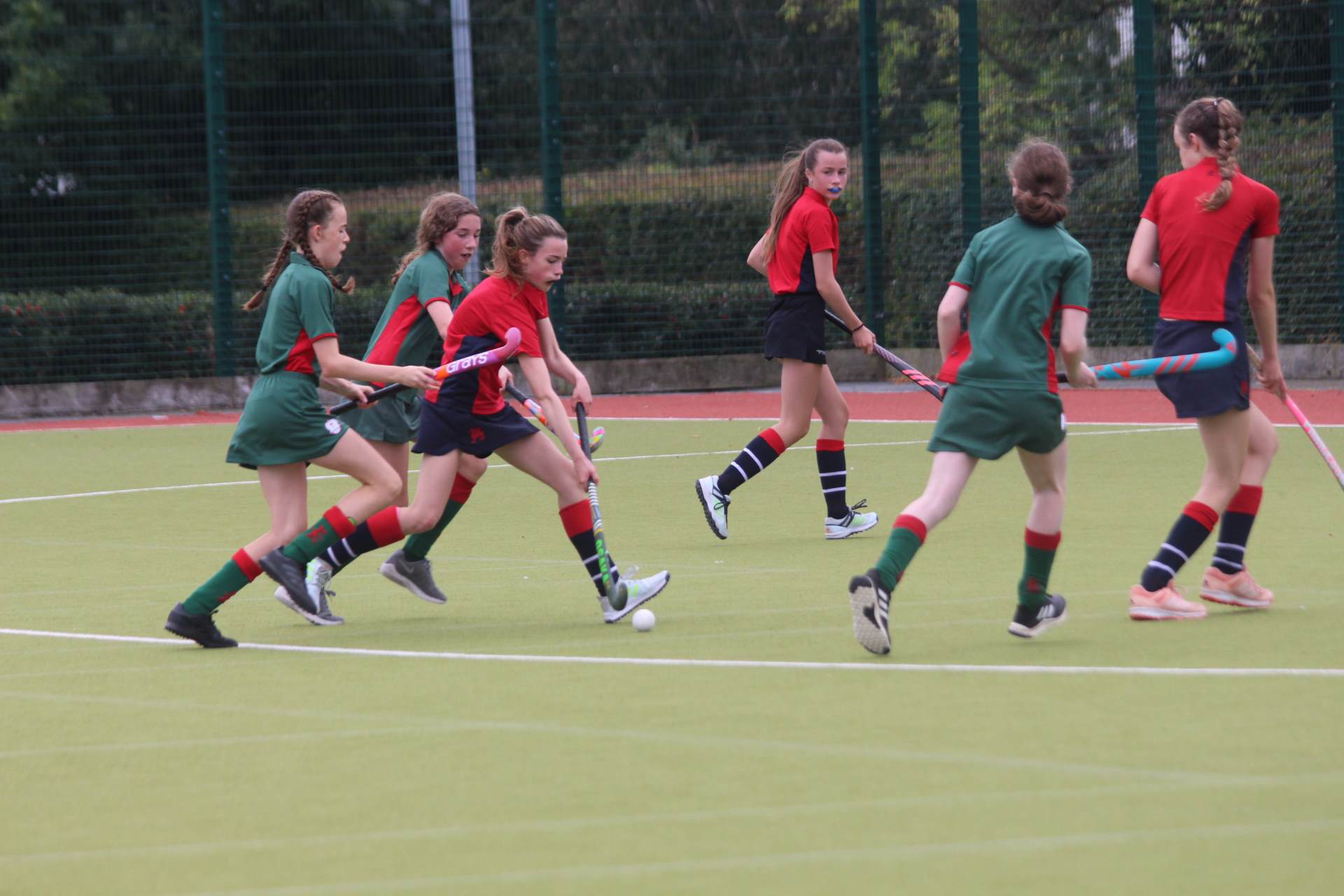 Minor B vs Holy Child Killiney

The Prep and 1st Year teams lined up for their second fixtures, fielded two teams. There were 3 x 20 minutes of hockey played by every team, with squads rotating up and down the cages so plenty of hockey and running for all. Tara Quigley and Evelyn Hefflefinger were our only two goalkeepers and both girls worked tirelessly calling their defenders into position and making many saves throughout the day. We hope to recruit a couple more goalkeepers this week in training so that we can have a goalkeeper for each team for the season. 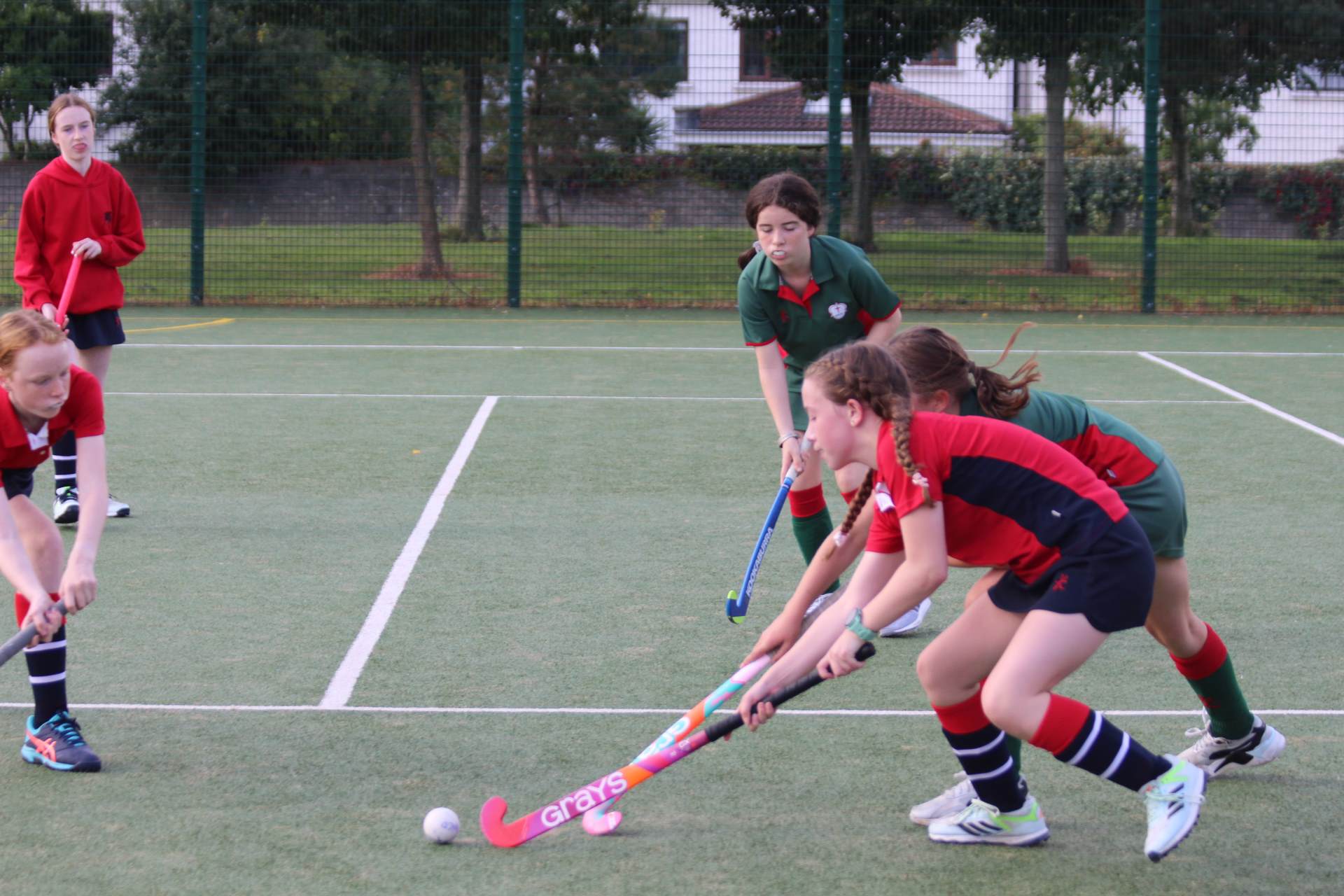 Wednesday saw another round of matches for the girls, this time against Loreto Beaufort, St Andrew’s and The Teresian School.

A good performance from the Senior 1s, who controlled their game against Beaufort from start to finish. Mya Adams opening the scoring after being put clean through she finished calmly. Laura Heaney got the second from a PC rebound. In the second half Mikayla got the third after some nice individual skill and a cool finish. Siúin made it four with a powerful finish. Plenty of positives to take from the game, from a team that are growing in strength. The 3’s had a 1-1 draw against Beaufort while the 4’s produced a dominant first performance against St. Andrew’s. Wesley had been camped in the opposition’s half for the first and most of the second half. This saw two goals coming from Sophie Moran and Julia Horan. We had a number of chances in the second half but couldn’t convert, failing to extend the score line. Andrew’s got a corner in the final minute and Wesley conceded. Credit also to Juliet Moore who had a superb game.

The Junior Bs had a convincing win against The Teresian School, with goals shared around while the C and Ds played Loreto Beaufort. The Cs won 3-0 after which the Ds produced a good defensive performance, with neither teams converting to leave it finish up a scoreless draw.

Lots of great play from the Minor Cs during their first 11-a-side full pitch game. After some great defending from Eva McCraith and Ruby Wilkinson, St Andrew’s continued with pressure and scored. Wesley quickly turned this around with some excellent play from mid field and a goal from Emily Barrett, leaving it at 1-1 for half time. Sophie Bainton and Nicola Langheld continued to create some great chances but unfortunately no goals. After some more pressure form Andrew’s and some fantastic saves from Laragh Brooks in goals, Andrew’s scored their second goal resulting in a loss for Wesley. Lots of promise out there today and we look forward to seeing the team develop over the season.

This week saw the Senior 1’s take on two serious opponents in the warm up to the season. On Sunday they played the Leinster U16s and on Tuesday they took on the Irish Senior Women. Both games gave the team an opportunity to develop their partnerships and team work on the field, while also trying out different tactics, in preparation for the season ahead. A promising team that we look forward to cheering on from the side-line and no doubt will entertain all the spectators throughout the season. 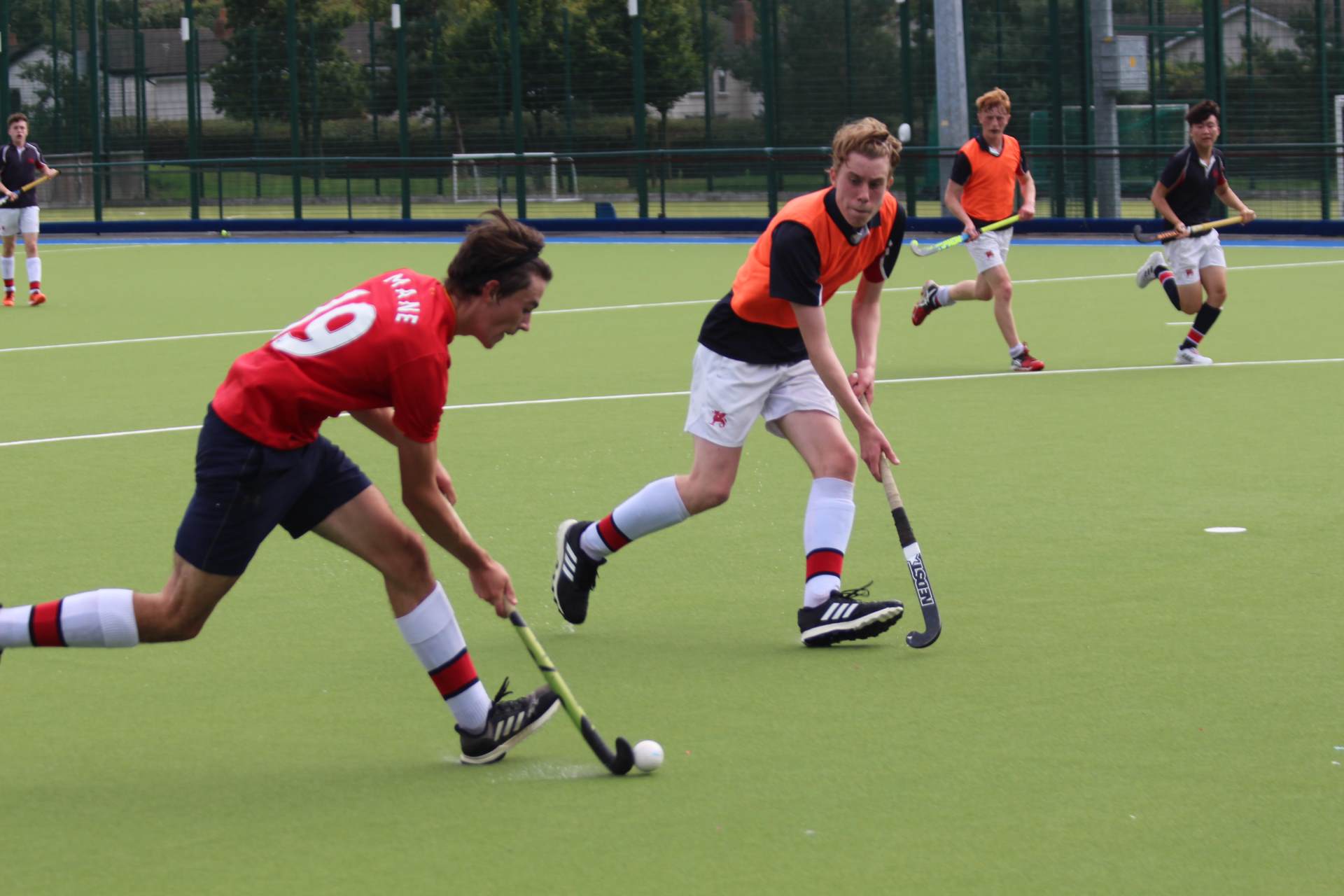 On Wednesday Senior 2’s were defeated 5-0 to Newtown, while the U14Bs held out Newtown to a scoreless draw. The Junior Bs took on The High School, finishing on top with a 2-1 win. 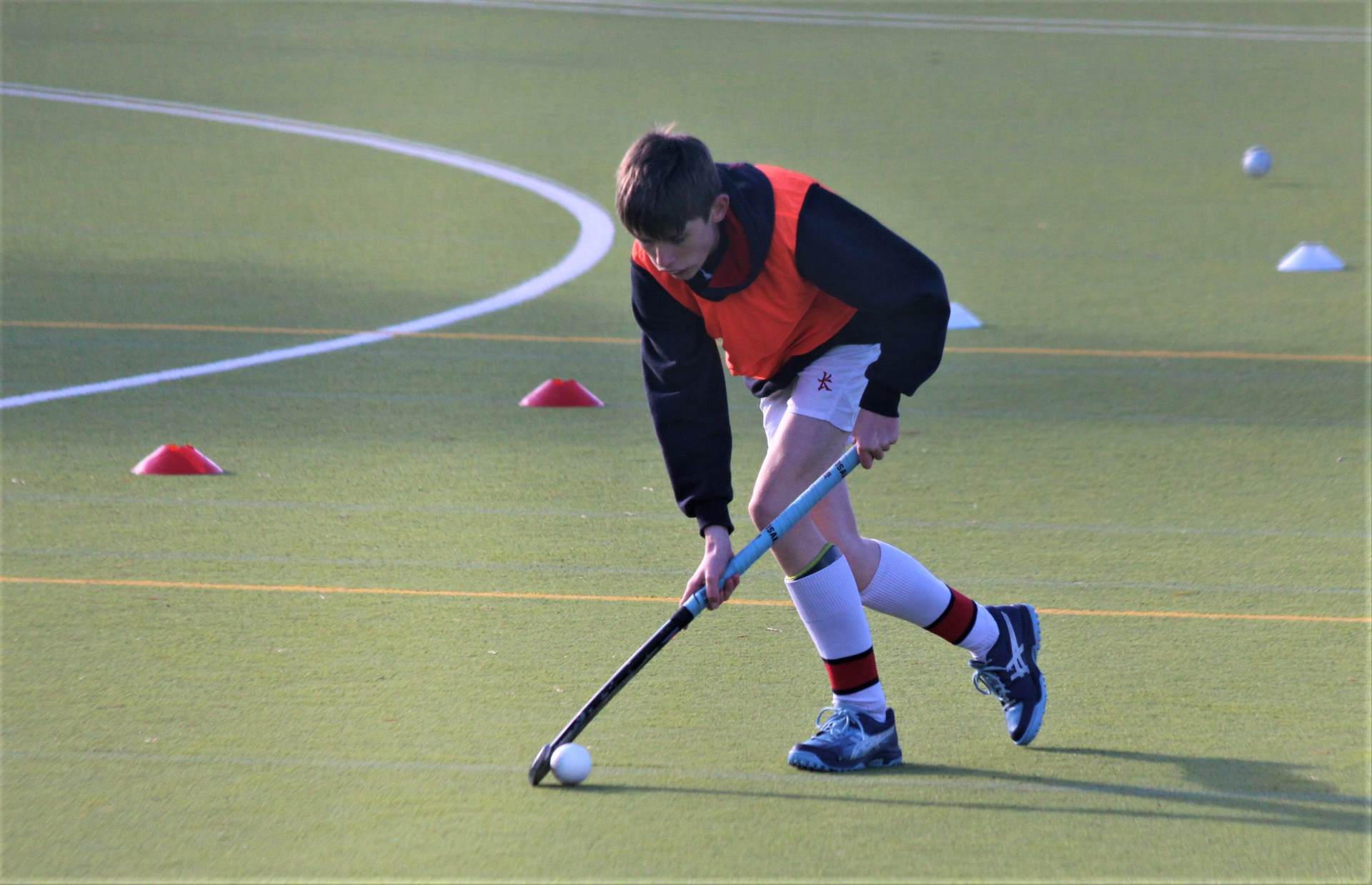 Badminton training continues with both Juniors and Seniors out twice a week. Check out the galleries below. 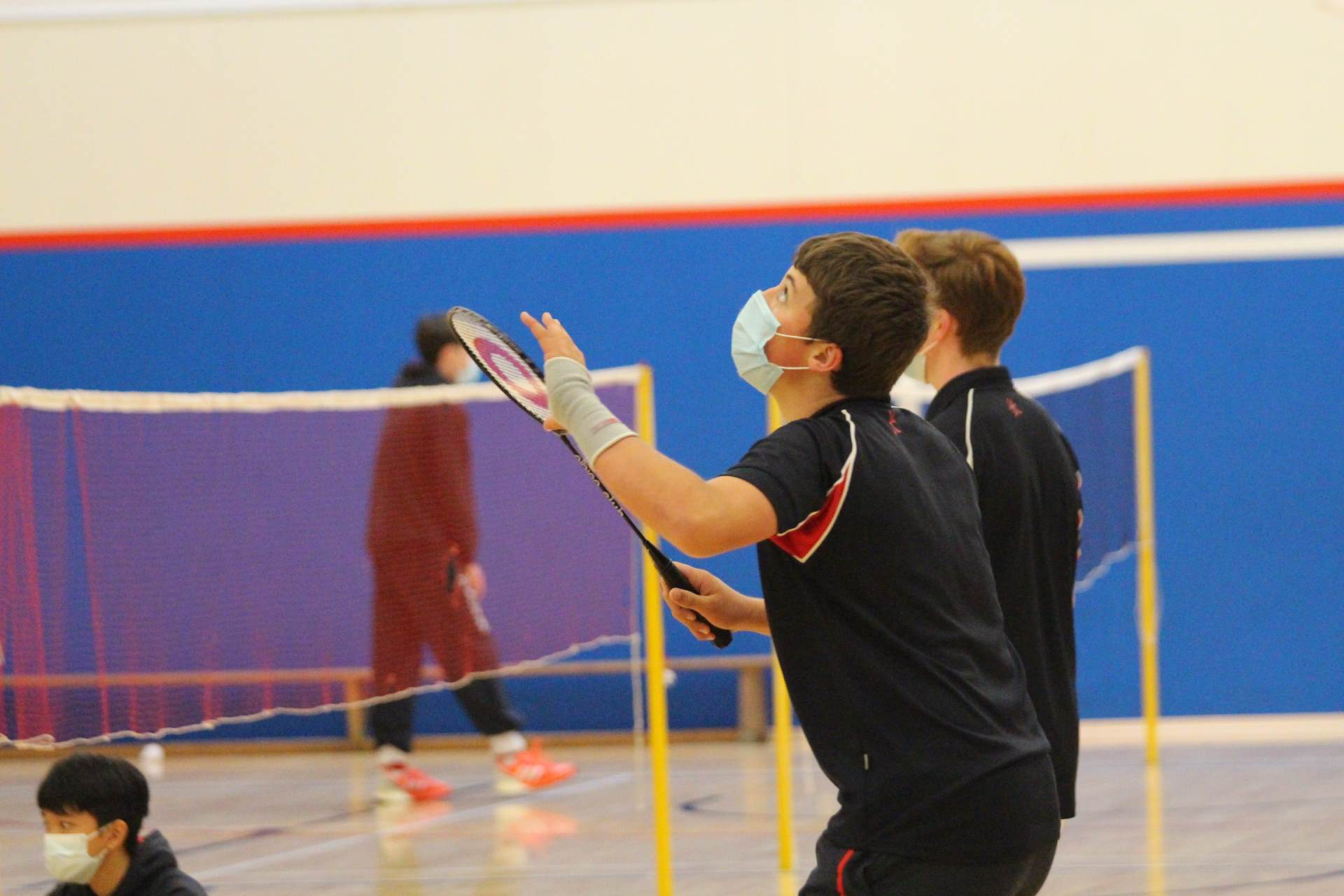 The basketball players continue with practice, constantly learning drills and developing their skills. All focusing on preparations for their upcoming fixtures. Check out their galleries. 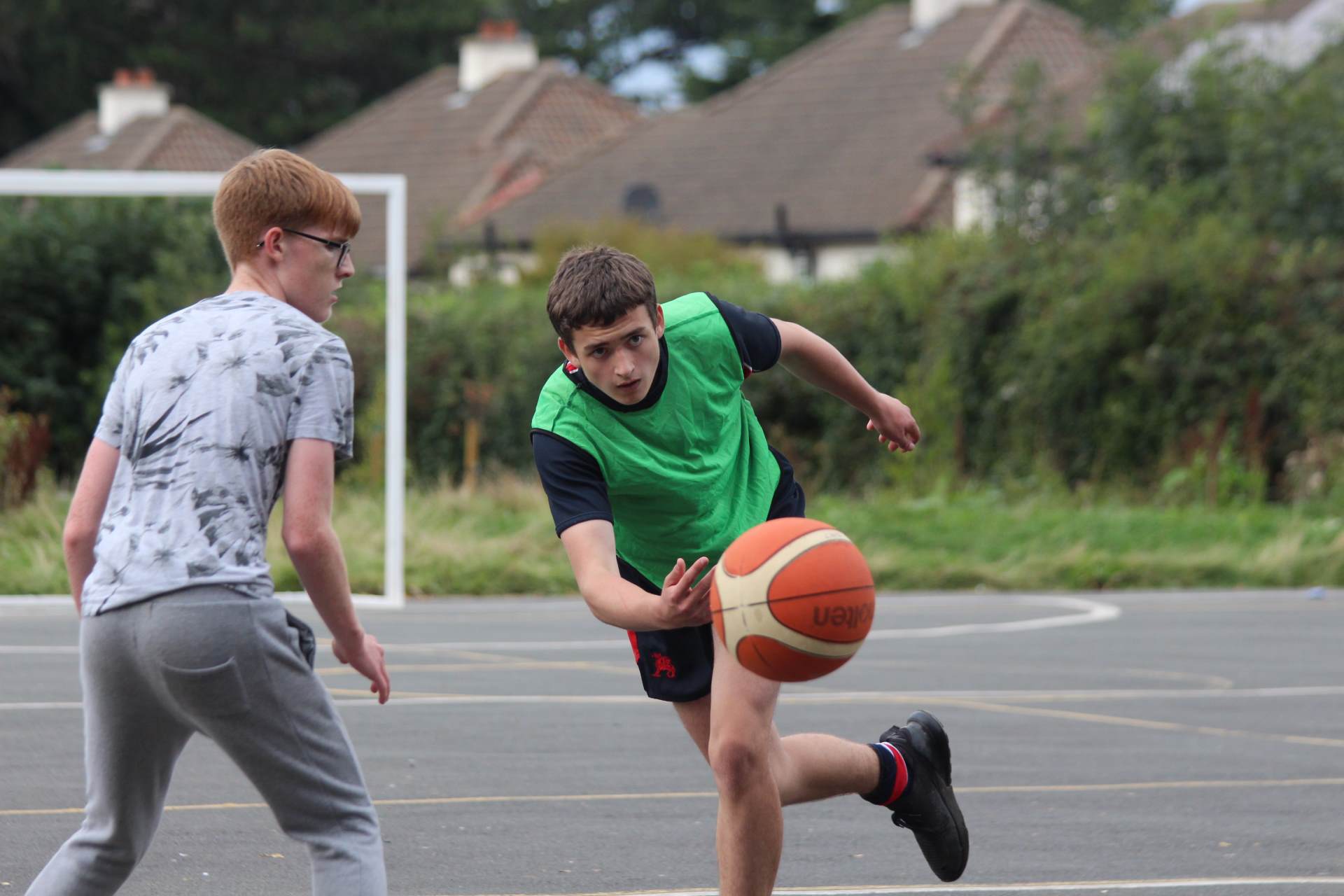