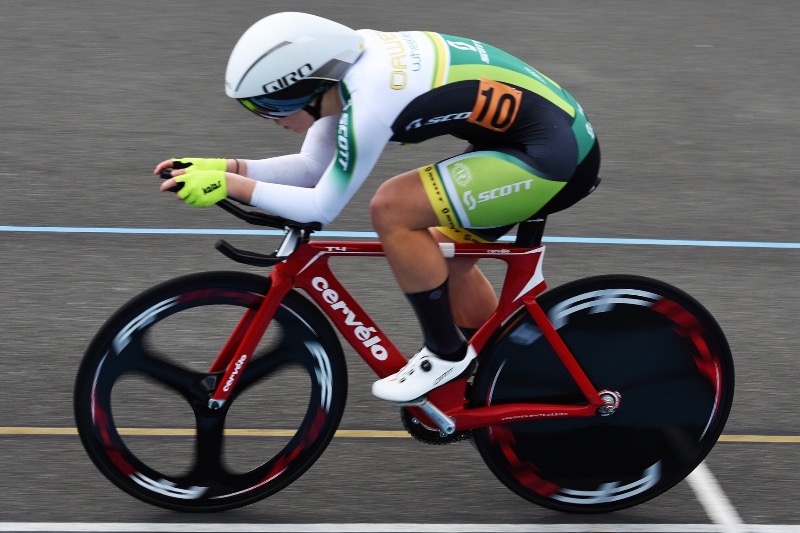 A hat trick of national titles for Lara Gillespie at the Junior National Track Championships over the weekend. Lara struck gold in the Pursuit, the Sprint and the Scratch Race. in doing so, she set a new national record in the Pursuit. Another stunning string of achievements - congratulations, Lara!

Special congratulations go to Bobbi Gillespie who won gold in the Junior Girls Pole Vault and Jamie Byrne who won Gold in the Minor Boys 1100m. Good luck to Bobbi, who is now through to the All-Irelands.

The Junior B’s started their week off with a convincing 3-0 win against Foxrock, seeing them through to the quarter finals. They beat Holy Child Killiney, again 3-0. They played Loreto Dalkey in the semi on Saturday, unfortunately losing out 2-1. Well done to the girls on getting to that stage.

The Junior A girls beat Loreto on the Green 2-1 but unfortunately didn’t make it out of the group stages.

The Minor A’s beat St. Andrew’s in their quarter final 3-0 and Teresians in the semi. Good luck to the girls in their final in Landstown Tennis Club on Monday against Mount Anville.

Well done to the 1st years who won their quarter final against Teresians and will now play their semis next week.

Well done to all the girls in their matches and good luck to all those who are through to the semi-finals of the school championship, with the finals taking place next Wednesday afternoon.

Commiserations to the Senior team who lost out in the semi against Clonkeen. Well done to the boys for getting to that stage of their league. Good luck to all those taking part in the school championship, with the finals taking place next Wednesday.

Hard luck to the Juniors who lost by 9 wickets to St. Andrew’s. The 2nd year B’s beat St Columba’s by 42 runs with Jake Cullen scoring 75 and Christopher Collins and Joshua Ritchie took three wickets each.

Commiserations to the Senior 1’s who lost out in the semi-final against a strong St. Andrew’s side.

The very talented first year A team had three wins this week against St Columbas, St Andrews and Kings Hospital which sees them progress to the final which they will play next week. Good luck to the girls in the final.