The U-16’s beat Newpark Comp. 40 – 23 at the start of the week. Wesley had a tough first quarter, going behind by 8 points. The defence improved second quarter to dominate the game. Bosola Ojawale and Ronan Little played well and scored some great baskets in the second half. 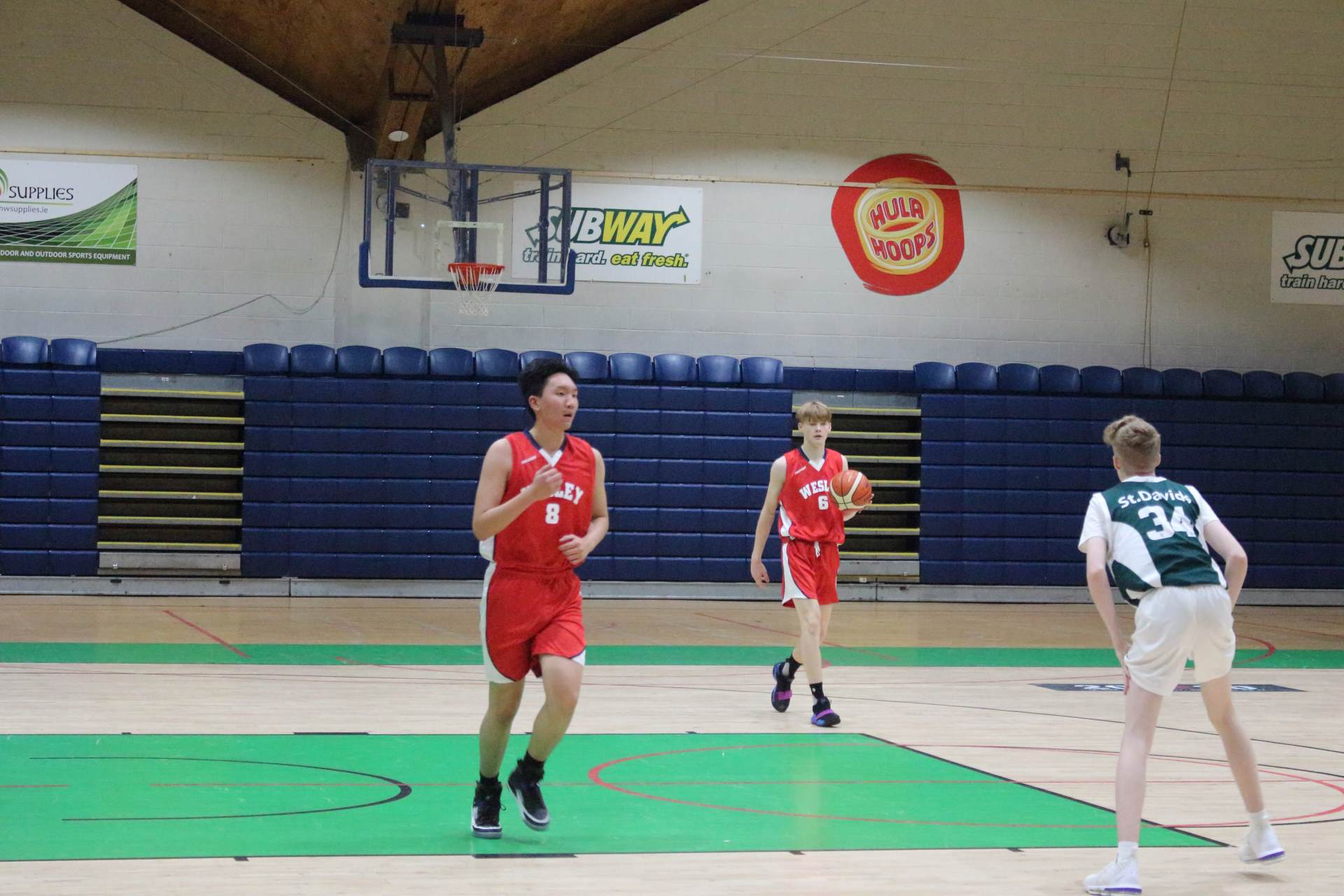 The U-19’s also won against Newpark Comp. 74 – 57. It was a great win for them against a strong Newpark team. James Little had a brilliant game scoring 45 points.

Two teams represented Wesley at JAG interschools on Saturday and both finished in the prizes. Double cleats from Holly Micklem and Jack Murphy, with an unlucky powered rail from Siun Handley and Holly Duggan, saw them take 2nd place. 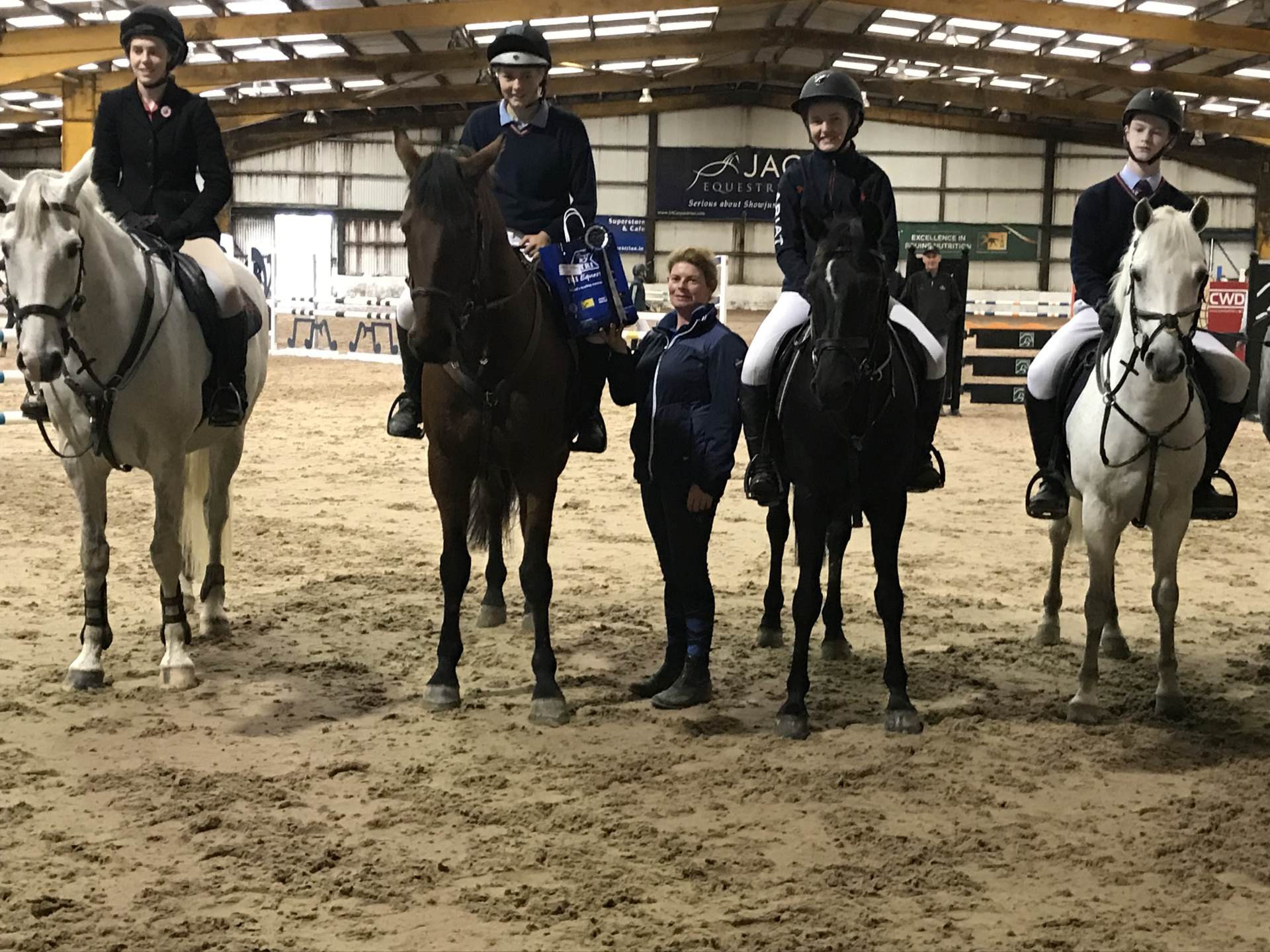 Alanna Doherty, Juliet Keyes and Jennifer Boland took 6th place which was impressive without the assistance of a 4th team member. This has been Wesley’s best start to the season ever, picking up 22 out of a possible 30 points in the league. 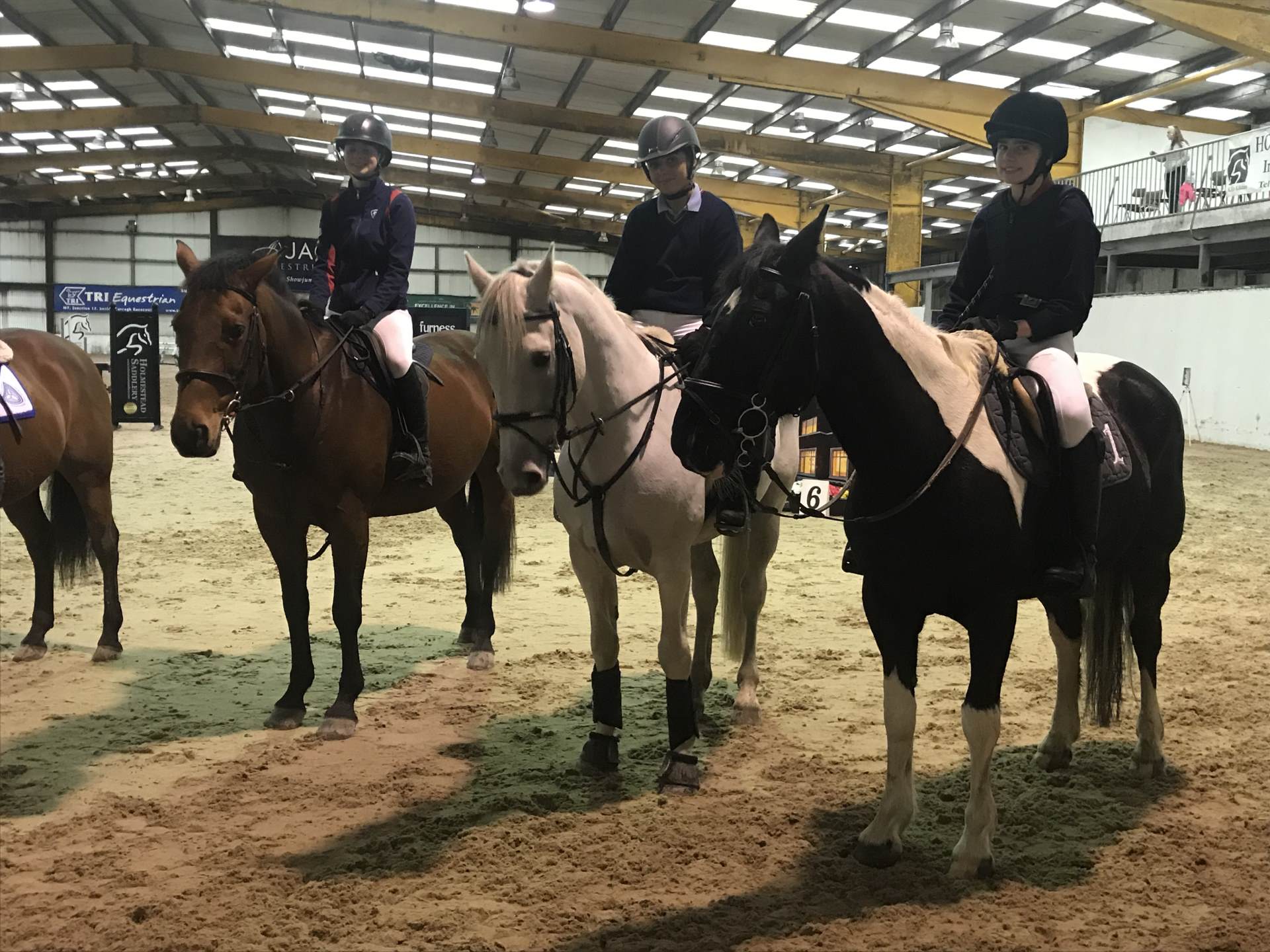 The Novice riders Grace Berry, Rebecca Quirk and Marissa Vard jumped lovely rounds and gained some valuable experience. Without the benefit of have a 4th rider they couldn’t discard any faults and just missed out on the prizes this time.

The Senior 1’s drew 4-4 with Ashton. Tom Power scored a hat-trick and Ben Ryder got the other in an entertaining encounter. In their 2nd match on Wednesday we went 1-0 up against Bandon through Tom Power but fatigue took its toll and Bandon ran out 3-1 winners.

The Junior A’s beat the B’s 5-0 in their league meeting. Gordon Bernon scored a hat-trick and Micah Switzer got a brace.

Congratulations to the Senior 1’s who beat Rathdown 2-0 in their opening league game. Sinead O'Grady scored from a PC with Emma Paul getting the second. Wesley were the dominant side throughout. 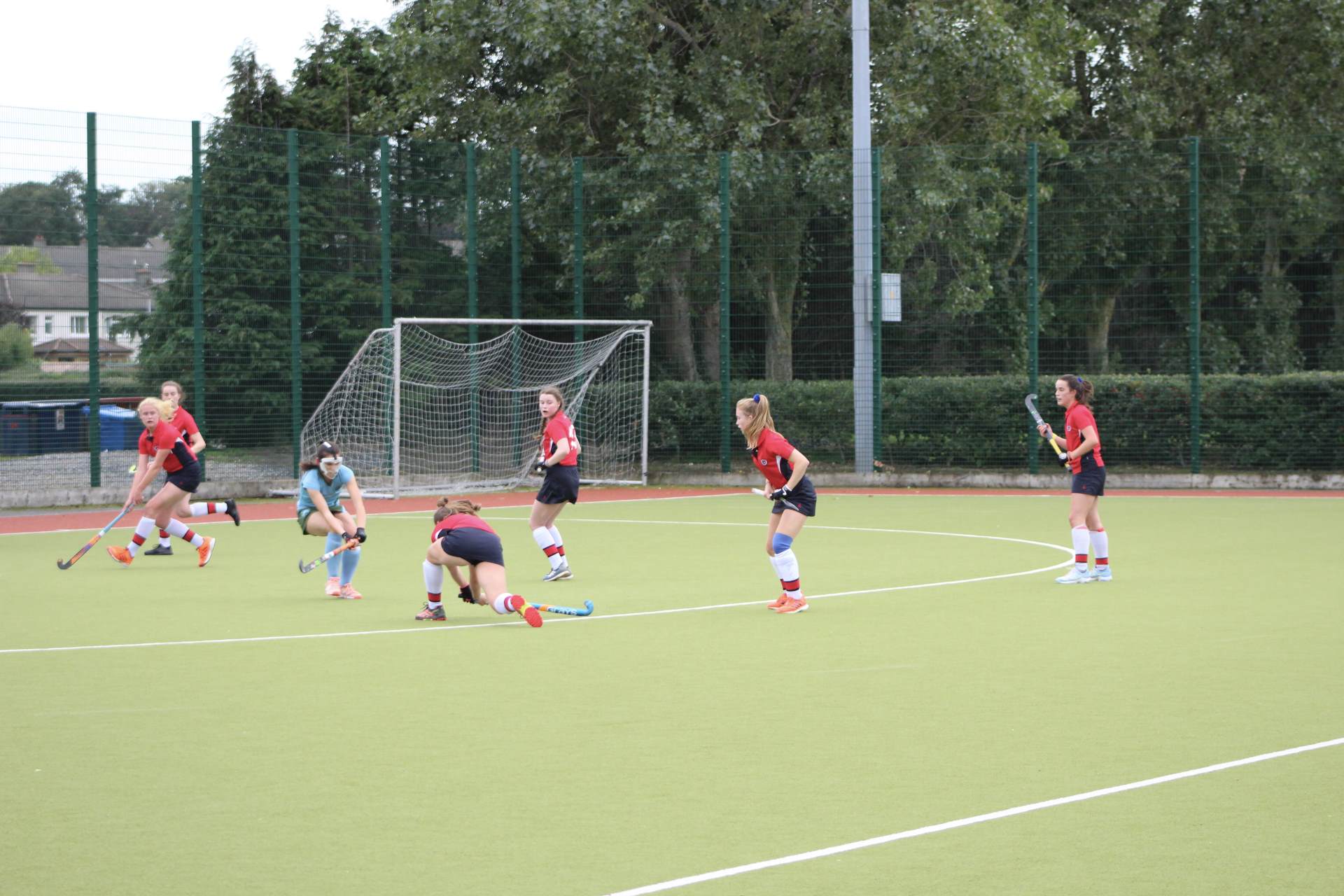 The Senior 2’s beat Foxrock 1-0, Jaz Web the goal scorer while the Senior 3’s had a convincing 5-0 win against St Columba's, with goals coming from Rachel, Isabelle and Sophie.

Hard luck to the Senior 5’s who lost their league match against a very strong Mt Temple side. The girls put in a great effort and created many goal scoring opportunities throughout.

Hard luck to the Junior C’s who lost their league game against Mt Anville 1-0. Unfortunately, they had a number of short corners at the end but couldn't convert. Hard luck also to the Minor B’s who lost 1-0 to Foxrock.

A number of teams played Muckross on Saturday. Despite losing, the Senior 4’s had a great second half performance. Emma Byrne the standout player in midfield.

The Junior B and C third year team lost to strong Muckross teams. Six first years and prep teams also took on Muckross. There was some great hockey played by all. It is great to see the girls making such progress.

The Minor A’s had a super performance to start off their league, beating Alex 4-1. They found another gear in the second half and played some excellent hockey. The goal of the day came from two-touch passing from the defence through midfield and tapped in at the back post. Goal scorers were Sophie Stewart, Ruth Keogan and Meadhbh Scanlon. Anabel Squires a standout performance. Hard luck to the Minor D’s who lost their league game against Loreto on The Green. Despite not having a full team, the girls worked tirelessly throughout.

The JCT XV were beaten well by a strong Kilkenny College side in their first league match of the season. They now look forward to meeting Cistercian Roscrea in the league next Wednesday. 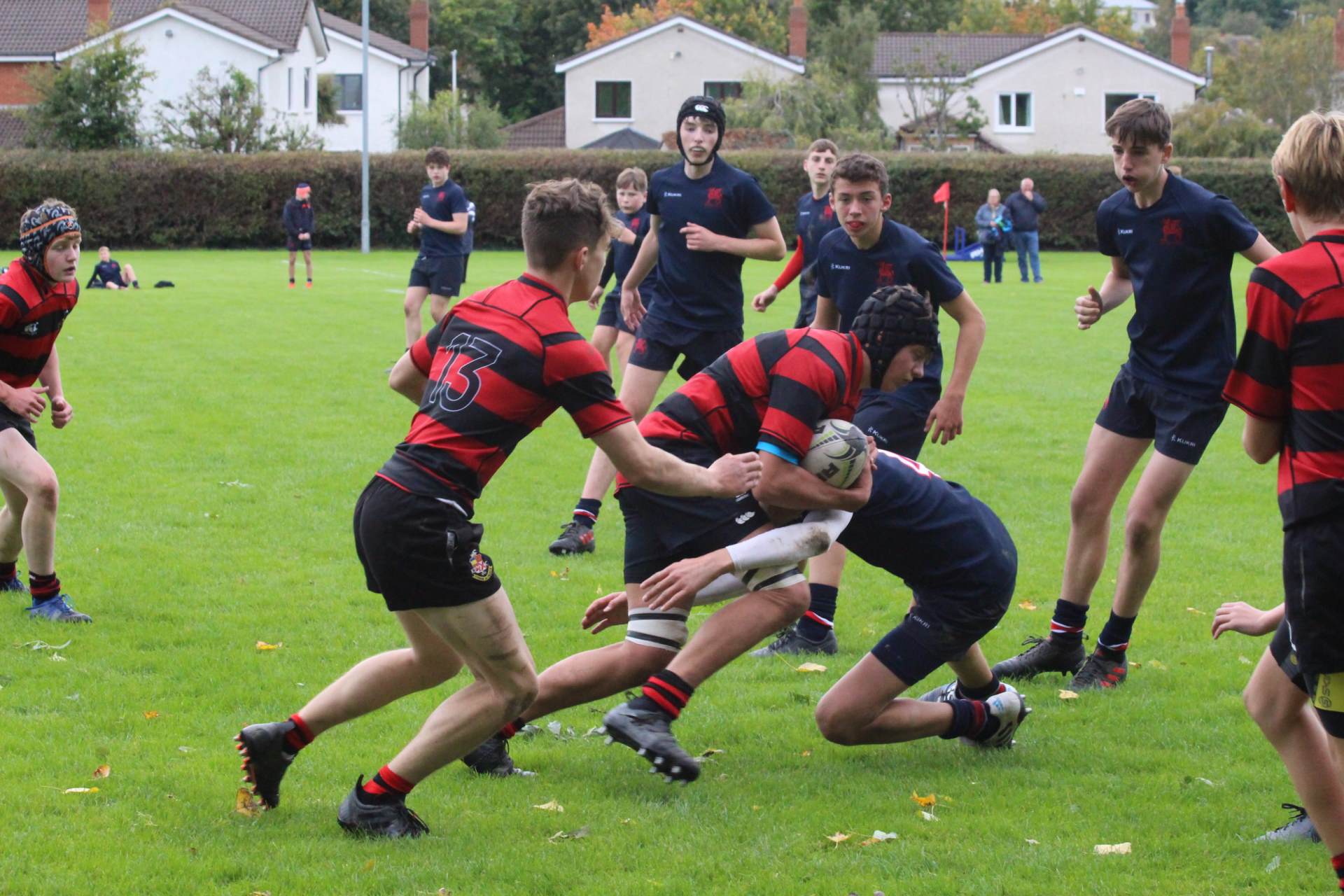 Hard luck to the U-15 A and B XV's who both had defeats away to Presentation College Bray. The A XV lost 29-17 with excellent performances from captain Rian Handley and vice-captain Peter Montgomery. Peter scored all of the teams points with three tries and one conversion. The B XV lost a thrilling game 38-31. A noteworthy performance in this match came from Evan Byrne who scored four tries alongside an additional score from Alby L'Estrange. Louis McSweeney added a further six points with three conversions from the tee.

The SCT XV lost the opening match of the league campaign to Kilkenny College 45-24. However, our four tries scored enabled the team to pick up a bonus point that could prove later in the league campaign. The Wesley try scorers in this match were Peter Costello (x2), Chris Gilmer and Jamie Metchette. Jack Atkinson added a further four points with two conversions.

A youthful 2nd XV were also beaten 31-19 in a competitive contest against Kilkenny College side. Well done to Jamie Crooks, Fola Ojewale and Tadhg O'Neill who all crossed over for scores. Alex Devenay added a further four points from the tee with two conversions.

The U-14 squad made a marvellous start to the 15-a-side side game with two away wins against Catholic University School at Bird Avenue on Saturday. The A XV won 0-38 with two scores a piece from centres David Gilmore and Christopher MacLaughlann-Hickey alongside tries for Tom Burke and Jack Duffy. Charlie Hempenstall added a further eight points to the score with another four conversions from the tee.

The U-14 B XV won 12-31 away to Catholic University School. Well done to Conor Delany, Jack Lucy, Cian Coleman, JJ Ryan and Joe Cullen who all crossed over for scores. Out-half Christian Ryan capped an impressive performance with three conversions from the tee. Jose Saturnino also put in a noteworthy performance on the wing in this match.