Congratulations to the Minor Basketball Girls who were victorious over St. Tiernan’s Community School. The final score was 34 - 4. All those involved had a great game and learned a lot going forward for their next league match. Check out the photos below. 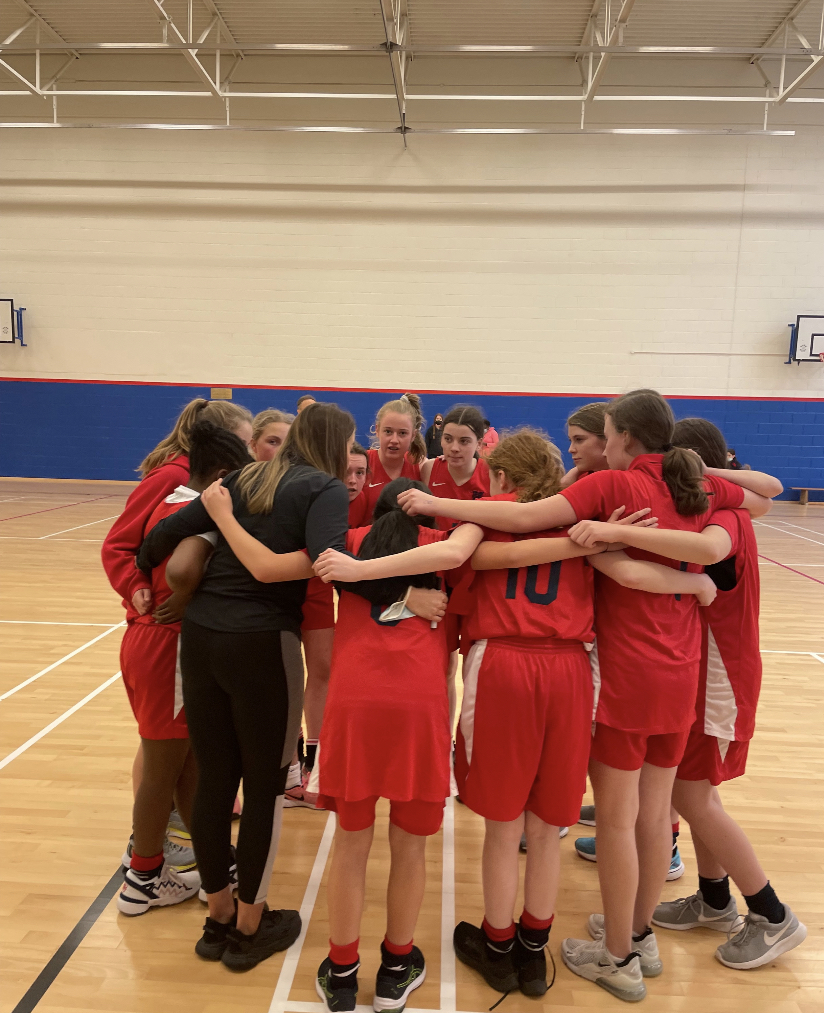 Unfortunately, the U14 B Boys lost out 1-0 to St. Columba’s, College on Friday in a very close game.

Having faced The High School, Rathgar earlier in the season, the U13 A Boys knew they were a physical team, and one of our toughest opponents. We excelled in minimising chances, and turning defence to offence very quickly. We set a target to win 6 short corners and ended up winning 8. Work will be needed on converting these chances, but all in all it was a comfortable performance! Overall winning 4-2.

Some of our U16 and U18 Wesley Hockey Girls went out to play at an interprovincial level last weekend.

On Sunday 6th of February, the All-Leinster battles took place up at Three Rock Rovers when Leinster South took on Leinster in the U16 and U18 Interprovincial girls hockey matches. Representing Wesley on the U16s were Alison Plunkett for Leinster South and Milla Fulton and Lucy Bond both part of the Leinster squad. The match was eventually won by Leinster in a match that was closely contested.

On the U18s squads, Tanya Plunkett represented Leinster South with Mikayla Power, Emma Montgomery, and Robyn Burke Mellon on the Leinster Squad. Special congratulations to Emma as this was her first-ever Leinster cap and she made the most of the occasion by scoring a goal in her side's victory on the day.

Last Saturday, the Junior A Girls won 3-0 in their final game before their league semi against Alexandra College. A solid performance that could have resulted in even more goals will give the girls good confidence going into the final stretch of the season. Goals scored by Bel Collins, Maedbh Scanlon, and Sophie Stuart

The Minor A Girls won their match against The High School, Rathgar 2-0. Following the convincing win over St Andrew’s College, we hoped to display the quality of progression the team has made over the last month. For most of the game, we controlled possession in their half, pressing well and making circle entries. Apart from 1 or 2 counterattacks from The High School, Rathgar there was never much real trouble. Goals from Lucy and Jess saw off the opposition and gave us the win!

The U13A Girls lost their match against Mount Anville 1-2. The girls faced a very strong Mount Anville team who played with a lot of confidence! Although the girls were under a huge amount of pressure from the very beginning the defensive line stayed strong and had a lot of composure. As the first half went on the girls gained confidence and although Mount Anville had a lot of possession the team managed to go 1-0 up with a goal from Lucy Gibney. The second half was a tough battle as the opposition continued to put pressure on our defensive line. Eventually, Mount Anville got rewarded for their continuous confident attacking style and scored 2 goals towards the end of the second half. Although the girls lost 2-1, it was a great match and a performance they should be proud of as they stayed composed throughout.

The U13 B Girls drew their match against Mount Anville 0-0. The girls faced a strong Mount Anville side that attacked with confidence and consistently put our defensive line under pressure from the very start. The team managed the game very well and stayed composed throughout, allowing them to fend off all the Mount Anville attacks and not concede a goal. While Mount Anville played with confidence so did the girls, having many great moments of attacking play. They put all their effort in until the final whistle but unfortunately, we were unable to score as the opposition's defense performed just as strong as our own!

The U13 D Girls drew their match against Mount Anville 0-0.

Unfortunately, the U13 E Girls lost their match against Mount Anville 1-2, lots to work on in training over the coming weeks.

On Wednesday, the Junior A girls had the comeback performance of the season to win their league semi-final against Andrews and continue their undefeated season. The girls came back from 3-0 with 5 minutes to go to draw the game bringing it to 1v1s where they won 2-1. Bel Collins started the comeback after a beautifully worked corner routine leaving her with acres of space to score a perfectly placed drag flick. Milla Fulton followed up instantly with another great solo finishing the reverse sweep across goal. The comeback was completed by Bel Collins with her shot across goal took a deflection to wrong-foot the keeper and ended up with the ball in the back of the net. Lucy Bond proved to be the hero of the day-saving 3 of 4 1v1s taken to win us the game. Maebh Scanlon and Aoife Cameron scored the 1v1s for Wesley. 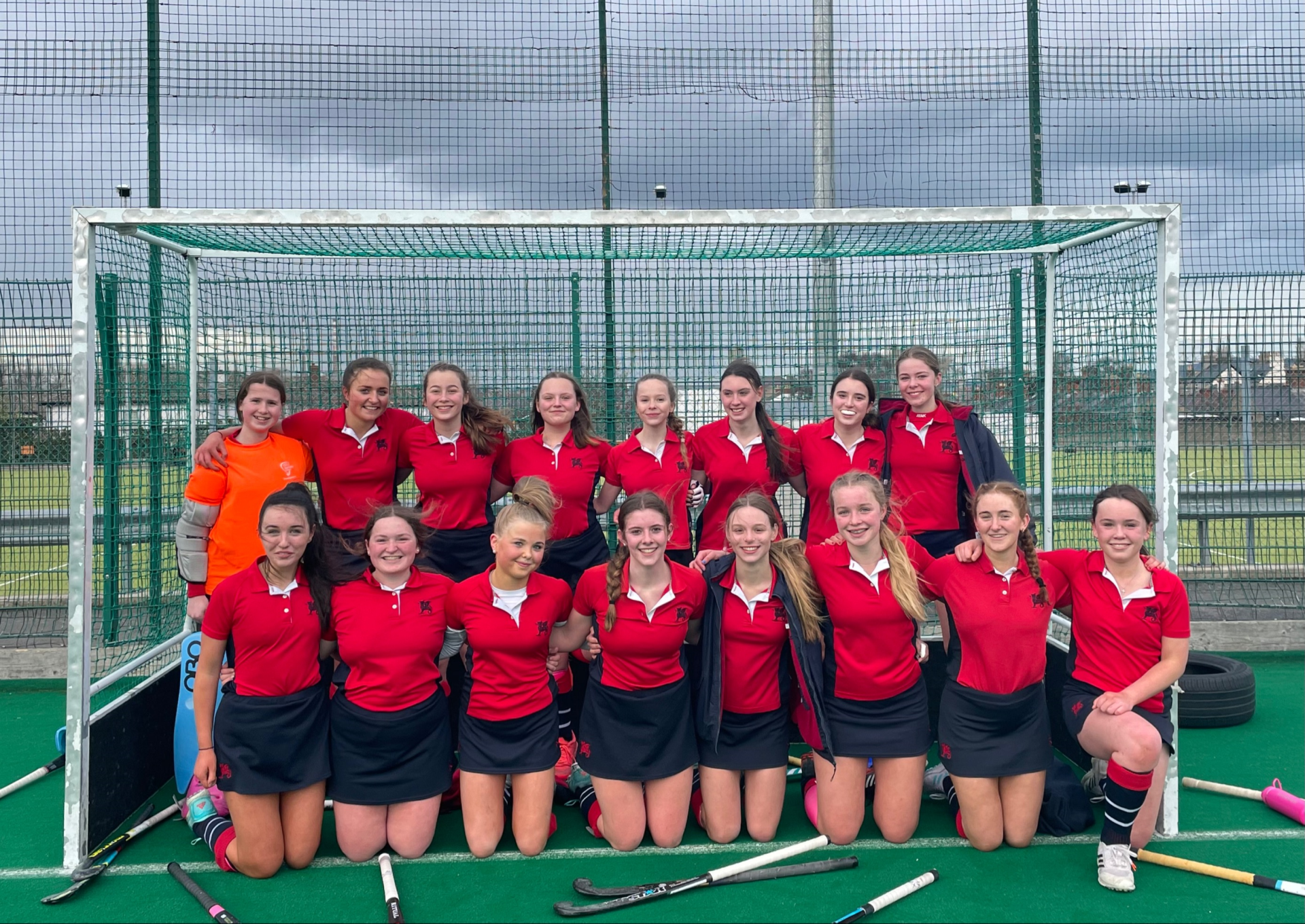 Girls Minor B won 2-0 against Newtown. A much-changed Minor B team had a great performance and result against Newtown. Many girls were missing due to a basketball match but the ones who were available really stepped up and had a great game. The first goal came from Alice Gardiner, with great close-range finish after some great work from Doireann Lowe and Philip McGlynn. The second came from a short corner breakdown where Lauren Flynn showed great composure to find Emily Woods in the circle who finished powerfully into the bottom corner. Strong defensive performances from Emma Langheld and Isabelle Corbet helped keep danger away from our goal. Check out the photos below.

Minor B Girls vs Newtown 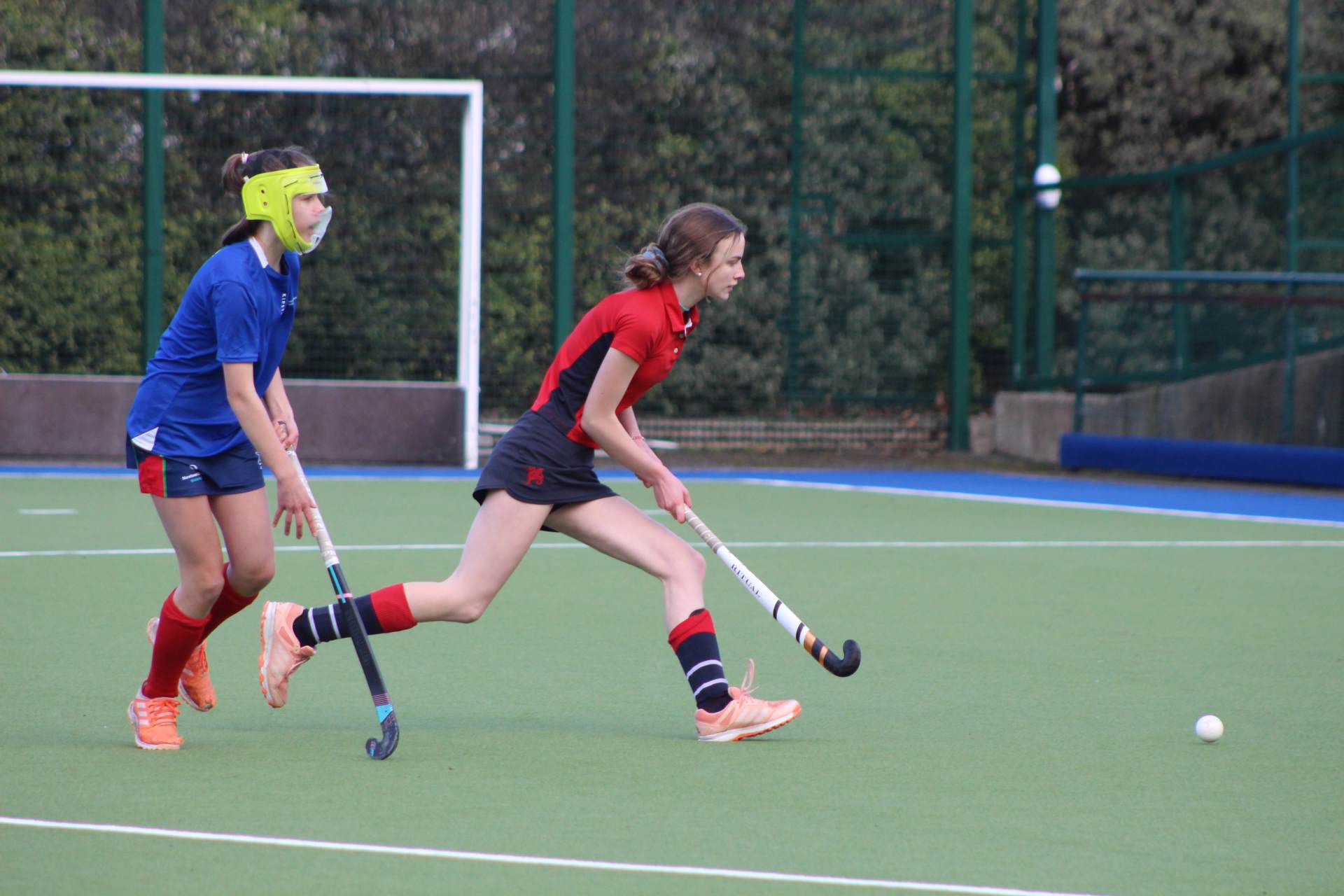 A very exciting 1st Year A and C team took off to play their first league matches of the season today in High School. The As went one goal down within a couple of minutes of the start and had to then settle themselves quickly into the game. It was a very composed and competitive match with both teams giving their all. The Wesley girls particularly in the 2nd half began to use the space of the pitch better and to link lots of passes together transferring the ball from a defensive situation into an attack. Julia Dick had a very good game in midfield linking cleverly with her other midfielders and forwards in the attack. Abby Pennefeather too made great line runs with the High School girls struggling to keep up with her pace. The Wesley Girls' persistence led to them scoring a well-deserved goal with less than 10 minutes to go. Ashleigh Clauson put away a goal following a number of clever plays and passes by the girls. This game at times was end to end and highly entertaining. Going forward we have lots of positives to build on and areas we can work on particularly keeping the ball out of the middle as we come out of our defensive zone. Well Done girls a great start to your league campaign.

The 1st Year C team had a fantastic start to their league campaign today against High School. The girls from the very start were focused and ready to hit the ground running. There was plenty of free-flowing passing around the Wesley players which opened up lots of space for balls to filter through to the forward line. The girls went in 2 nil up at halftime and not happy to rest on their laurels the girls came back out with an even better second-half performance where they scored an additional 3 goals with Alice Gleeson getting a brace of goals today. Well Done girls a great start to your league campaign.

The girls earned a hard-fought draw against a good Newtown team. Resolute defense kept them in the game in the first half with Saoirse and Tessa making some great tackles. A much improved second-half performance lead to a more open game. Newtown capitalized on that initially with a rocket of a goal. Wesley responded in kind scoring a lovely team goal involving some great passing and finished off by Anna. Ruth also made some great saves in goals. Check out the photos below.

U13 B Girls vs Newtown 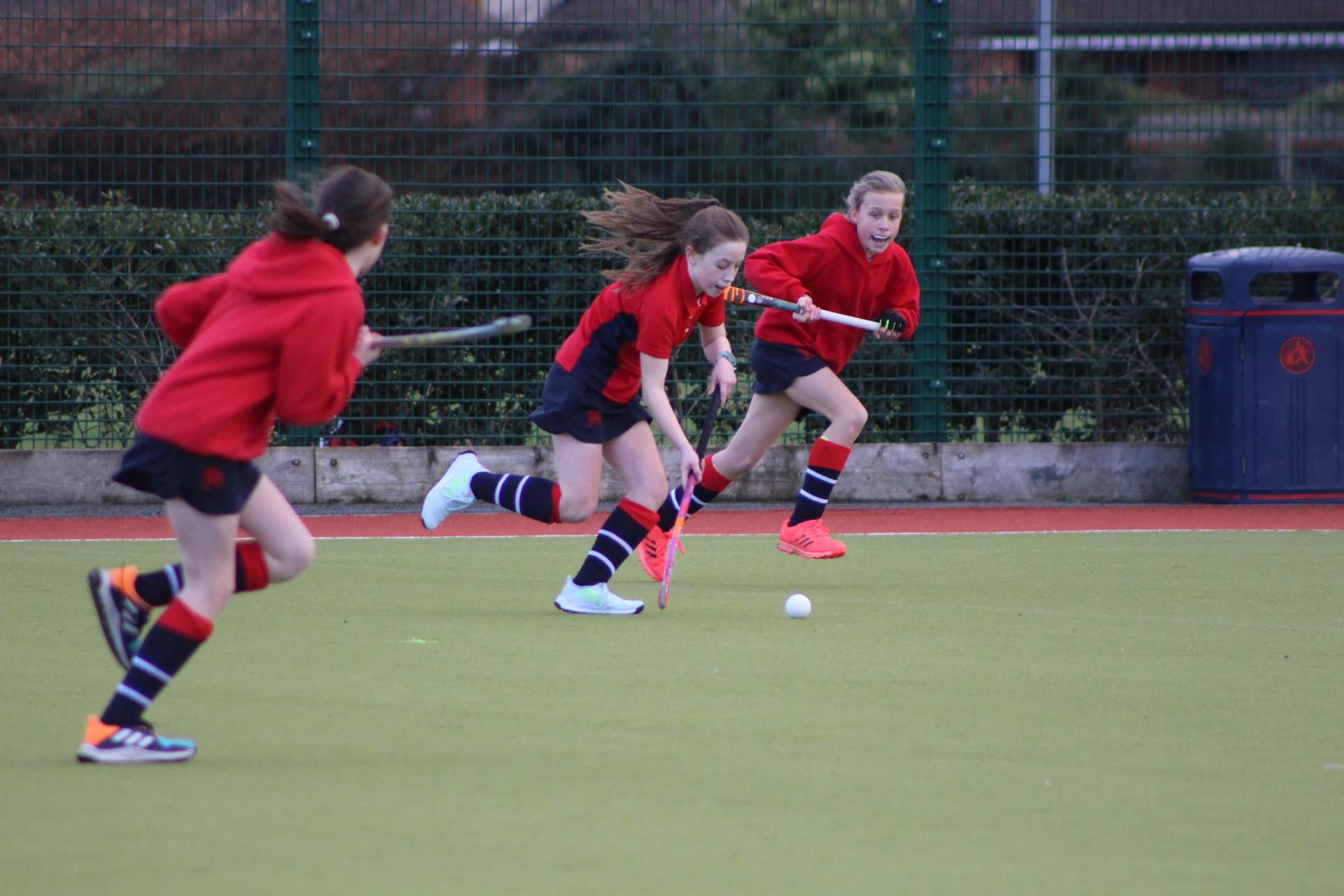 Unfortunately, the U13 D and E Girls lost their matches against Loreto Dalkey, the score lines being 2-3 and 2-4, respectively. Lots to work on in training over the coming weeks.

On Thursday, the Minor C Girls put on a superb performance in their match against Holy Faith Clontarf, coming out with a score of 7-0 and securing their place at the top of the table in their league grouping. They look forward to the knockout stages of the league in the coming weeks.

On Monday, the Prep Boys lost their match 3-4 to Rathmichael

A competitive game played out on the Senior pitch with nothing much between the sides on the day. Tries were scored by Sam McMullin and Andrew Gordon with some good passages of play and some areas for the team to work on moving forward into the Mid Term before their Cup match on the 1st. Check out the photos below. 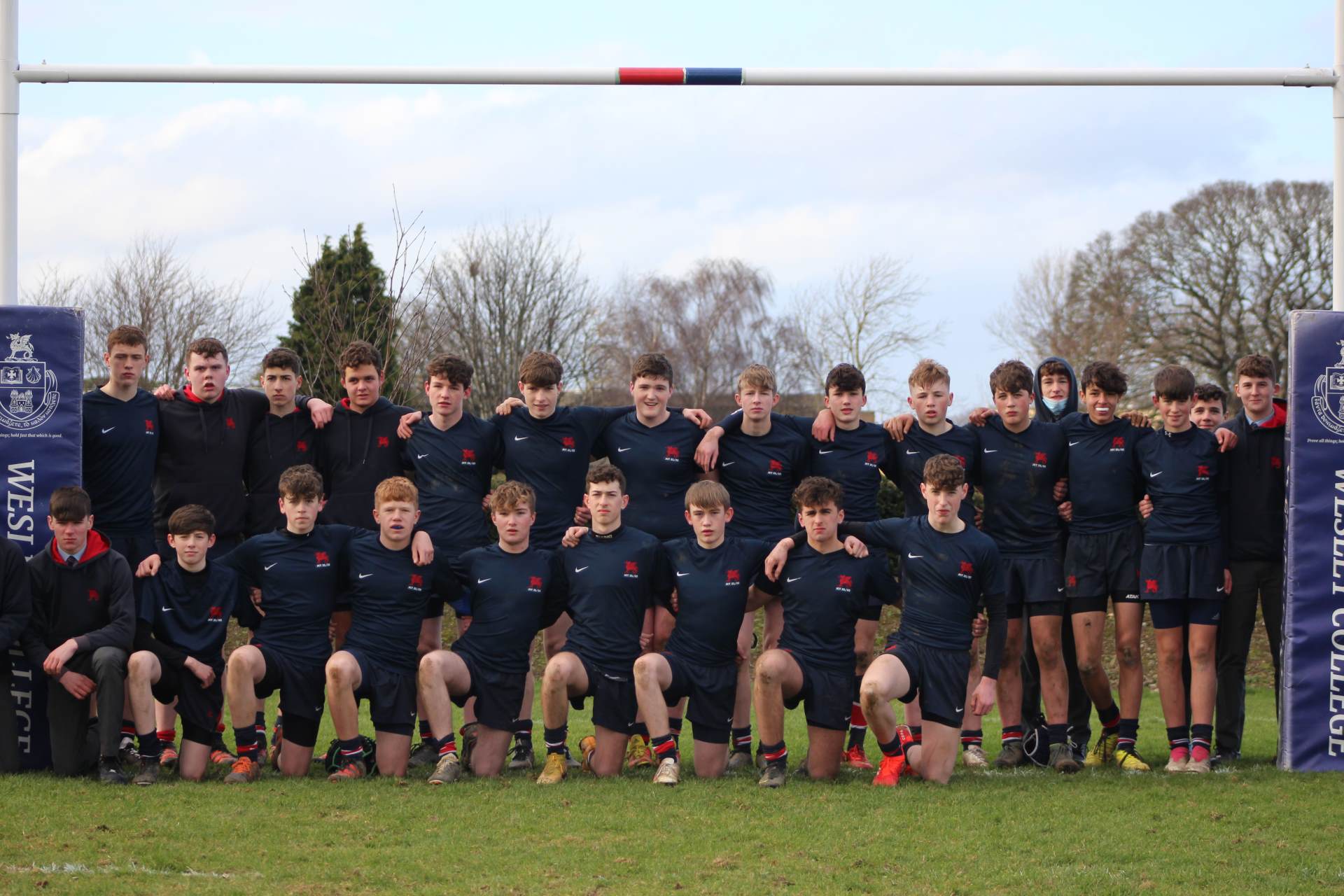 Wesley Red team had a very competitive fixture against Castleknock College. Wesley had a 24-0 lead at halftime but Castleknock got back into the match during the second half and the scoreline finished 36-24 to Wesley. Honourable mentions for Joshua Ellis, Ross Collins, Johnny Woods, and Thiabult Campbell who all had big performances.

The game started with a long 15 minutes of defending by Wesley. Even with some brilliant defending Wesley conceded a try. However, Wesley responded with two tries from James Wystepek and followed up by Jake Fulton. Going in at half time 12:5. Wesley got off to a great start in the second half with a try from Charlie Byrne and a second try for James Wystepek leaving the game 24:5. However, with some excellent attacking by Castleknock they brought the score line back to 24:17. Wesley just did enough to get the game over the line but a great win.

The under 14 whites put in a good performance with a nerve say die attitude against a very strong Castleknock side. Wesley went down by 4 scores in the first half but rallied hard in the second half to come back and challenge Castleknock with tries from Andrei Trif x2, Luke chapman and axel, other impressive players were Logan Moffett and Fionn McGlynn. Check out the photos below.

U14 Rugby vs Castleknock 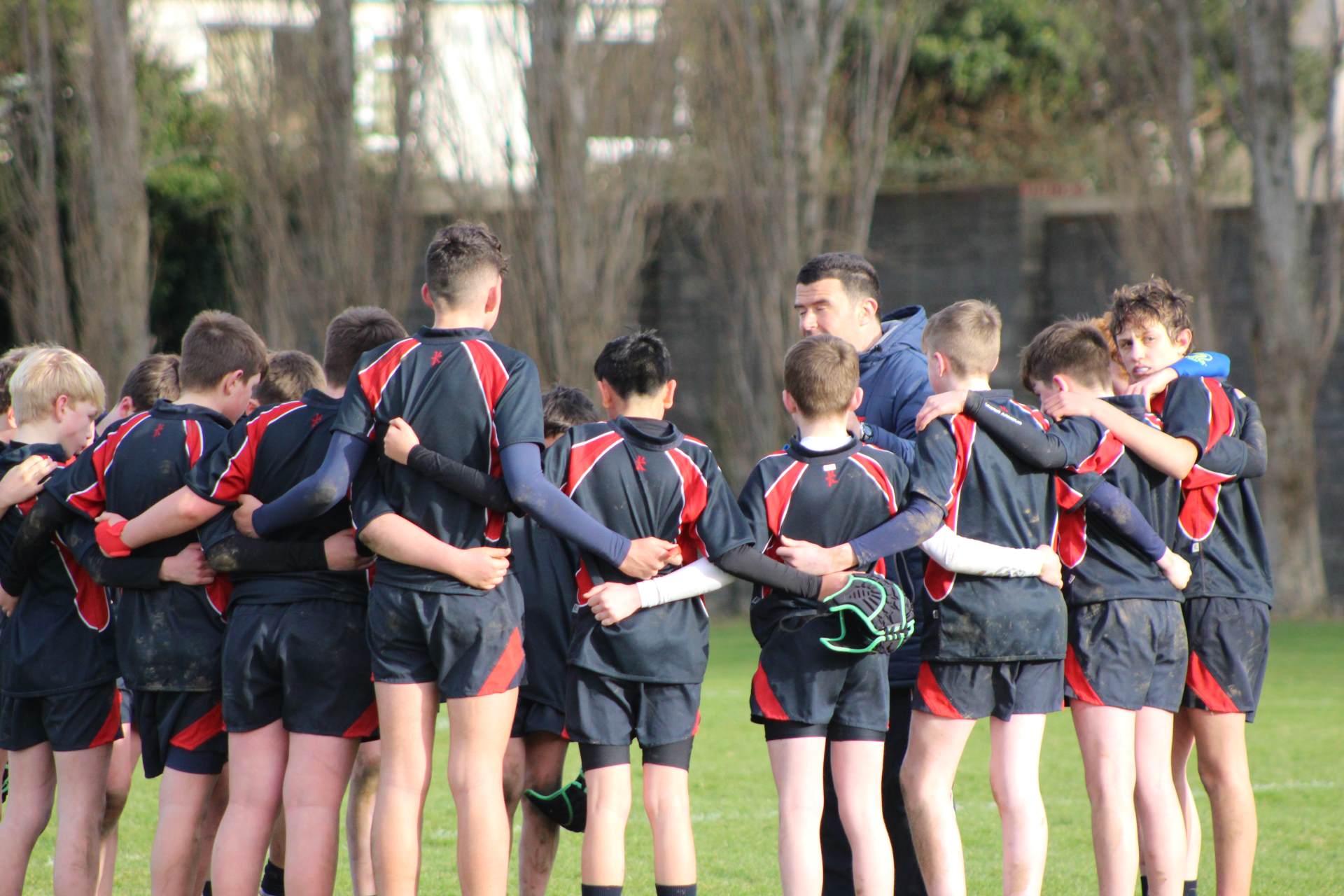