On Tuesday, the Junior A Boys had a fantastic game as they faced King’s Hospital in their Cup Semi-Final. An outstanding performance by all, and they look forward to their final next Wednesday. The end score was 8-0. Check out the photos by clicking the link below.

Junior A Boys vs King's Hospital 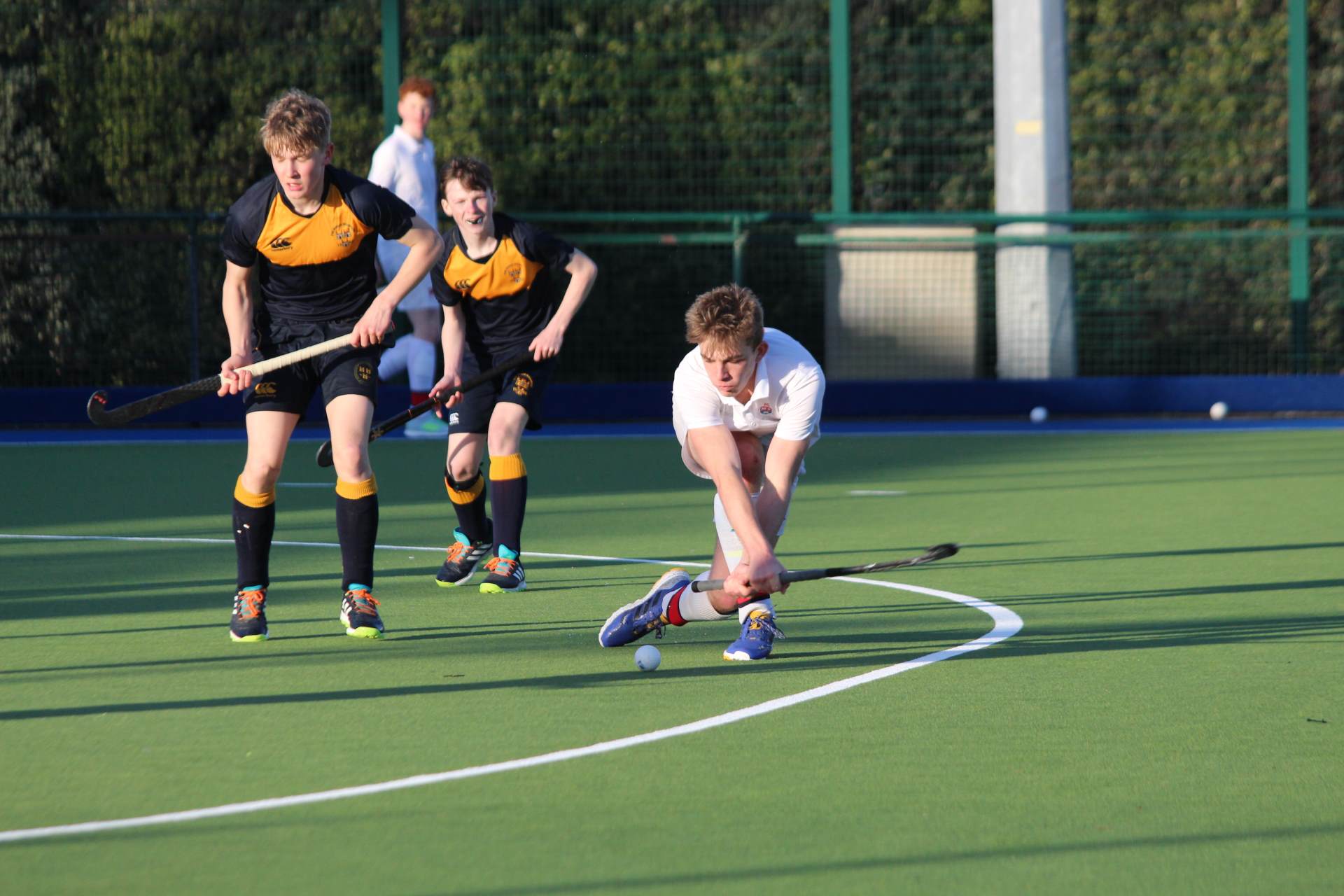 The U14 A Boys followed suit last Tuesday, and also secured a win in their league Semi-Final against Sandford Park. The end score was 5-2. They look forward to their final next Tuesday. Well done.

On Wednesday, the Senior 1 Boys faced The High School, Rathgar in a league match. Unfortunately, they were unable to secure a win, but came out with a draw. The end score was 1-1. They look forward to facing them again in their Cup next Monday.

On Monday, the Senior 4 Girls faced Loreto Balbriggan in their league Quarter-Final. Unfortunately, the girls lost, the end score was 2-1. The goal came from Cara Small. A very close game and the girls should be very proud of their performance and the achievement of getting as far as they did. Well done. Check out the photos by clicking on the link below. 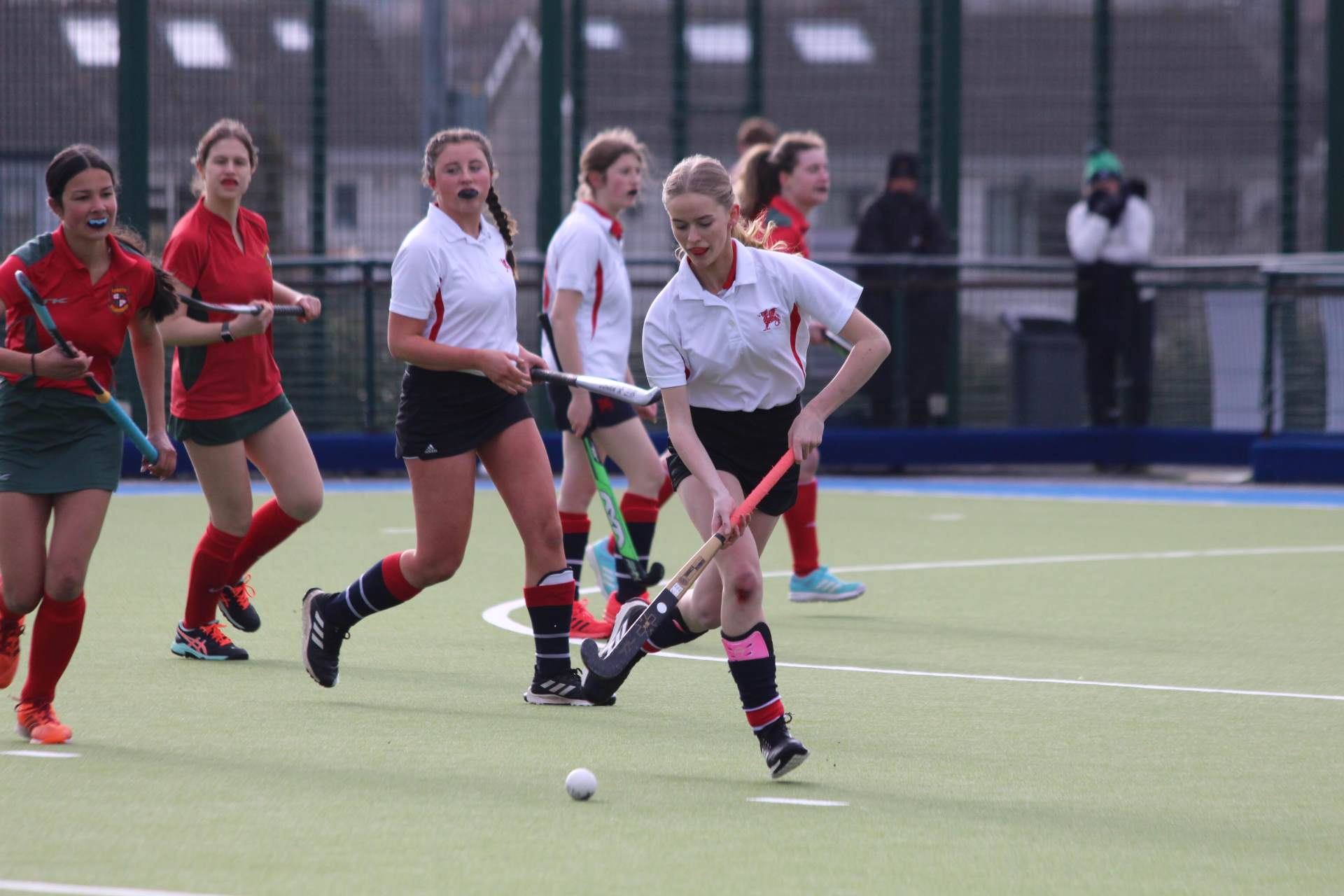 Unfortunately, the Junior B Girls also lost out last Monday as they faced a strong Muckross side in their League semi-final. An extremely close game with Muckross scoring from a short corner towards the end of the first half. Wesley came close to creating a lot of chances but couldn’t quite create the final product. The game could have gone either way, the girls were just unlucky to not get more goal-scoring opportunities.

On Wednesday, the Senior 1 Girls faced King’s Hospital in their plate semi-final. A dogged King’s Hospital team made the senior girls work hard for a semi-final plate win. An early goal from Tara set us on our way but after that KH applied a huge amount of pressure and were unlucky not to score. A drag flick from Sinead eased the nerves and when we relaxed the game opened up and two final quarter goals gave the scoreline an unfair outlook. The goals came from Tara, Sinead, Mya and Milla.

The Junior D Girls also had a semi-final last Wednesday and took on Mount Temple. A very competitive game, but unfortunately they couldn’t quite secure the win. The end score was 2-1. Well done to the girls on getting as far as they did, and playing in the terrible weather conditions.

Unfortunately, the Minor Cs also lost out in the Semi-Final of their league last Wednesday as they faced a very strong, Sandford Park A Team. The girls never gave up, despite the terrible weather conditions and should be very proud of their achievements this season.

On Thursday, the U13 B Girls took on Loreto Foxrock. Wesley had a great win against a strong Loreto Foxrock team this afternoon, Wesley started the stronger creating a few early chances through Anna and Zoe but couldn’t score until midway through the first half when Zoe played a great ball to Niamh Gough who finished it well for 1-0. Loreto started the stronger in the second half and it took some great defending from Tess and Saoirse to keep the score at 1-0, after this pressure Wesley really kicked on in the second half with Zoe scoring a great goal to secure the win. Great performances from Tess, Anna and Niamh. Well done all.

The rain cleared, the sun came out, hundreds of supporters descended on Three Rock Rovers and the scene was set for an epic Senior girls premier league final. Both sets of supporters provided a vociferous cauldron-like atmosphere that was worthy of the drama that would unfold.
Wesley started the first quarter the better team, creating opportunities. Some dogged work from Siuin Woods led to the opening PC for Wesley which was converted by Emma Montgomery with a smart backhand deflection after a switch move.
Wesley’s confidence was up and we continued to play attacking hockey creating a number of opportunities.
Into the second quarter and Foxrock equalised early after a ball across goal wasn’t dealt with and allowed a Foxrock attacker to sneak in and equalise. With the goal it was then Foxrock’s turn to step up and apply some pressure. Lindsay Power and Lucy Bell were rock solid at the back and dealt with the majority of the attacking pressure. However, Wesley were struggling to link and create sustained pressure of their own and so the score stayed level. The final quarter was a classic onslaught from Wesley with balls fired into the Foxrock circle at any given opportunity with the hope of something accruing from it. PCs didn’t click and other chances were dealt with by Foxrock, there was even one goal rightly ruled out. Mikayla Power drove things in midfield, Milla Fulton, Mya Adams and Annabel Squires constantly threatened upfront but to no avail.
It finished level and we were into shootouts.
An incredible display of skill, speed and composure from both teams saw the scores level at 4-4 after 5 each. Sinead O’Grady with the cool head to convert the last one with the match on the line.
Into sudden death and the tension in the ground was extreme. Mikayla, Annabel and Lindsay converted three more for Wesley and Hannagh McKenna made an outstanding save to leave Wesley champions, 7-6. The occasion, the drama, the atmosphere the quality of display from both teams was a sight to behold. 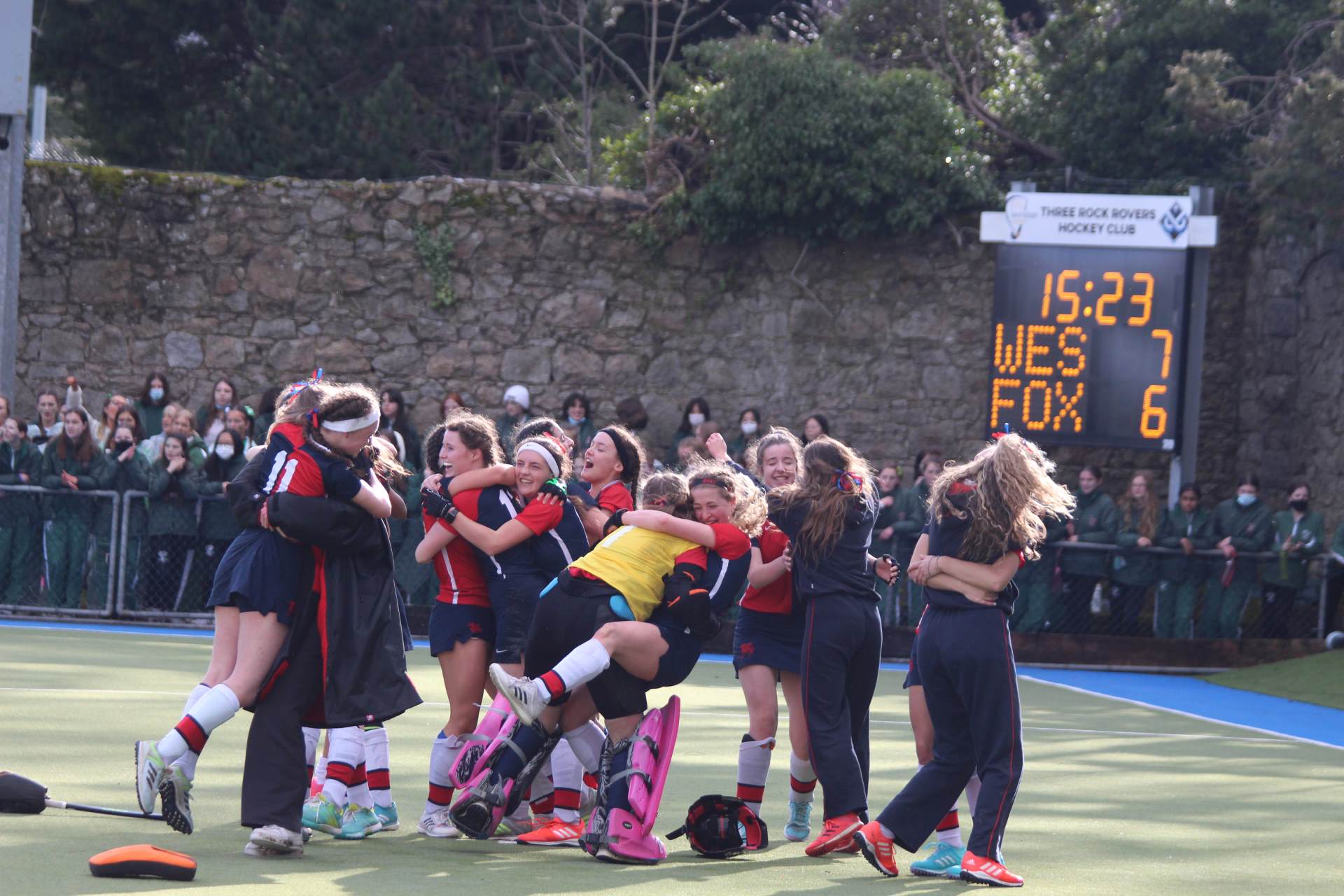 The Senior team came into this Quarter Final off the back of an excellent first round victory over a strong Roscrea team. Having lost captain Dan Campbell in the first round the armband was passed to Tom Geoghegan.

The snappy passing of Gonzaga was countered by the ‘in your face’ defence of Wesley until a high tackle opened the door for Stephen McMahon to miss from close range.

Flanker Geoghegan was leading by example, whipping the legs away from Luke O’Callaghan, and Wesley were using Toby Durham and Liam O’Neill to break the gain line.

The swirling wind made passing a test, both defences nailing runners, even though prop Sean Foulds bounced McMahon backwards in the tackle.

Gonzaga had to be smooth in their exit plan, Hugo Neville almost slipping out of the grasp of Finn Nolan’s stunning takedown.

The presence of Ireland Schools Hugo McLaughlin was dangerous, twice unlocking Wesley until desperate defence and a forward pass put paid to those moments of class.

A loose ball in midfield had Wesley streaming through, McLaughlin mopping up the mess.

Wesley were first to feed on the scraps, Foulds smashing into Hugh Goddard and O’Neill’s late footwork good for go-forward.

Next, full-back Matthew Golden was met with a high hit from O’Callaghan, conceding an attacking lineout which Wesley promptly lost.

The Ballinteer school was just falling foul of a faulty lineout and a tendency to give away penalties in Gonzaga’s half.

The reaction of Wesley was solid, bringing Durham and Fish into the game, hitting around the fringes and Golden chasing his own kick to pin down McMahon as the half-time whistle sounded. On resumption, a short ball from McMahon put Maguire into a hole and left-wing O’Neill bulleted forward for 10 metres.

A burst off the base of a scrum by Oran Handley was not enough to relieve the mounting pressure.

A sweet left-handed delivery from McMahon put Neville just outside the clutches of Golden to make it 12-0 in the 41st minute.

The agility of Maguire at the breakdown forced a penalty McLaughlin nailed in the 46th minute.

The three-score chasm tempted Wesley into chancing passes that were not coming off.

Browne and No 8 Paul Wilson took the fight forward and replacement Oisin Murray’s first touch from Wilson’s pass was too good to cover, McLaughlin converting from the left for 22-0 in the 55th minute.

There was nothing left for Wesley, but a test of character which got even more searching when Gavin O’Donnell forced a penalty on the floor for McLaughlin to turn into three points.

Wes’ simply sent their big runners up the guts and slick hands asked questions for which the Sandford Road school had the answers.

Wing Finn Nolan executed an unlikely turnover, but Gonzaga were ruthless, coming through the maul for Tomas Noone to snatch their fourth.

It was left to Wesley to play to their own set of standards, never dropping their heads and funnelling forward for Handley to power over. It was the least they deserved.

A disappointing end to the season but they can hold their heads high and be very proud of what was an excellent achievement in reaching the Quarter Final and one that could easily have gone further for a talented group. We look forward to seeing a lot more of the 6th years names on various teamsheets in years to come.

Check out the photos by clicking on the link below. 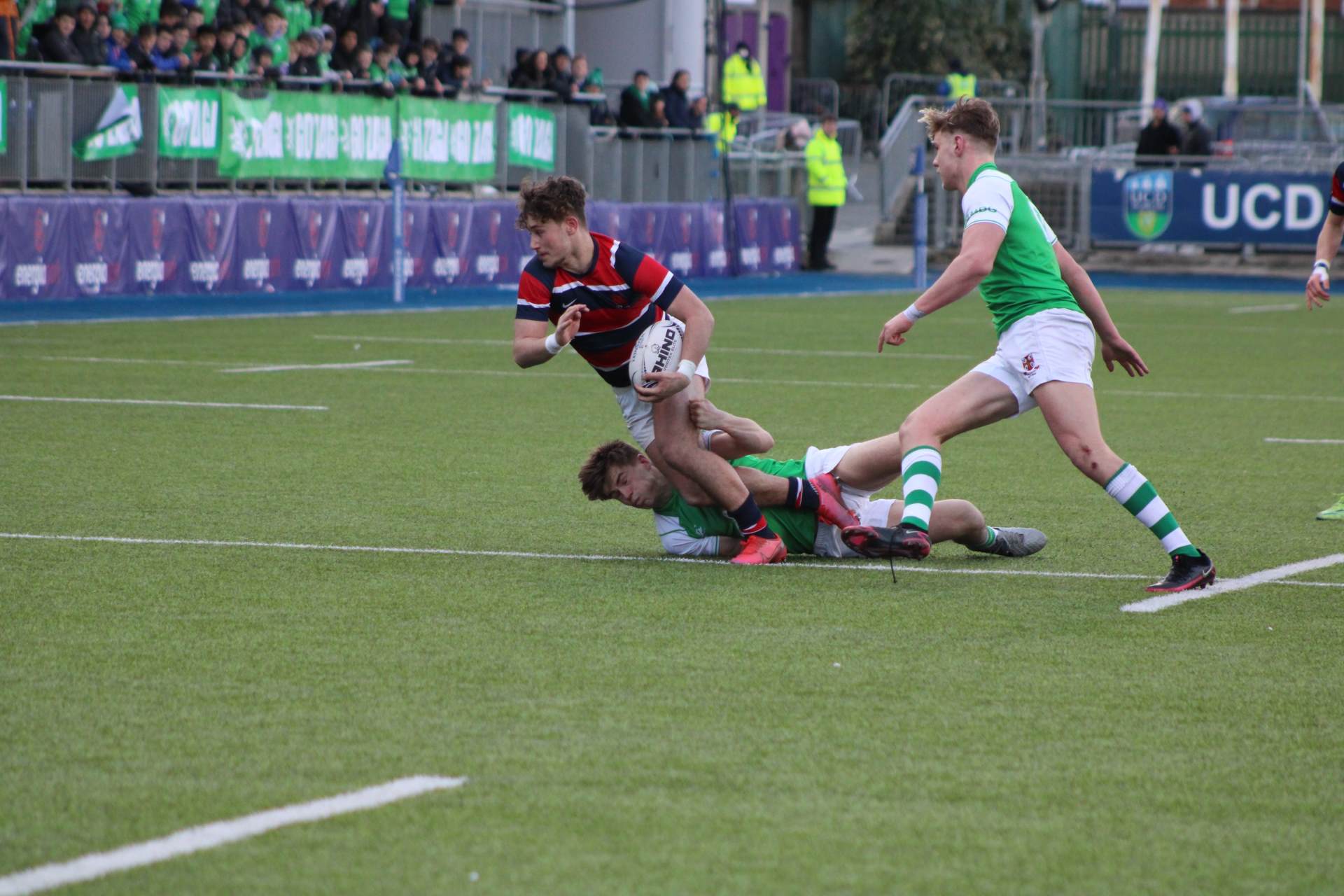 After an outstanding first round win against Belvedere the junior team were dealt a difficult draw in coming up against a highly fancied Blackrock side in the quarter final. Wesley came out of the blocks strong showing a great ability to hold onto the ball and go through the phases against a physically imposing Blackrock side. They were unlucky when a loose ball somehow ended up in a Blackrock pair of hands for the first score of the game against the run of play.

Wesley regrouped brilliantly and again showed some real attacking intent with some strong carries from Sam McMullin and Joe Cullen testing Blackrock with some strong carries while Sam Ryan and Harry Jones worked tirelessly around the fringes. They gained some territory and possession off the back of a few well earned penalties but were unable to capitalise with Blackrock showing their ability to break from anywhere on the pitch.

Wesley got their just rewards for another bout of sustained pressure with a finely struck penalty by Charlie Hempenstall but it was Blackrock who managed to finish the half stronger with some other breakaway scores.

Wesley struggled to gain field position in the second half against the wind while Blackrock grew more into the game and were comfortable at moving the ball at every opportunity. Wesley fought right to the very end though which is a testament to the character of the team and were rewarded with a brilliant try by Cameron Shiel following a pinpoint cross kick from Charlie Hempenstall. In the end the scoreboard resulted in a tough day at the office but in reality it didn't reflect the effort and commitment of this group who can be very proud of their season and we look forward to seeing a lot of the team in SCT jerseys for the school in years to come. 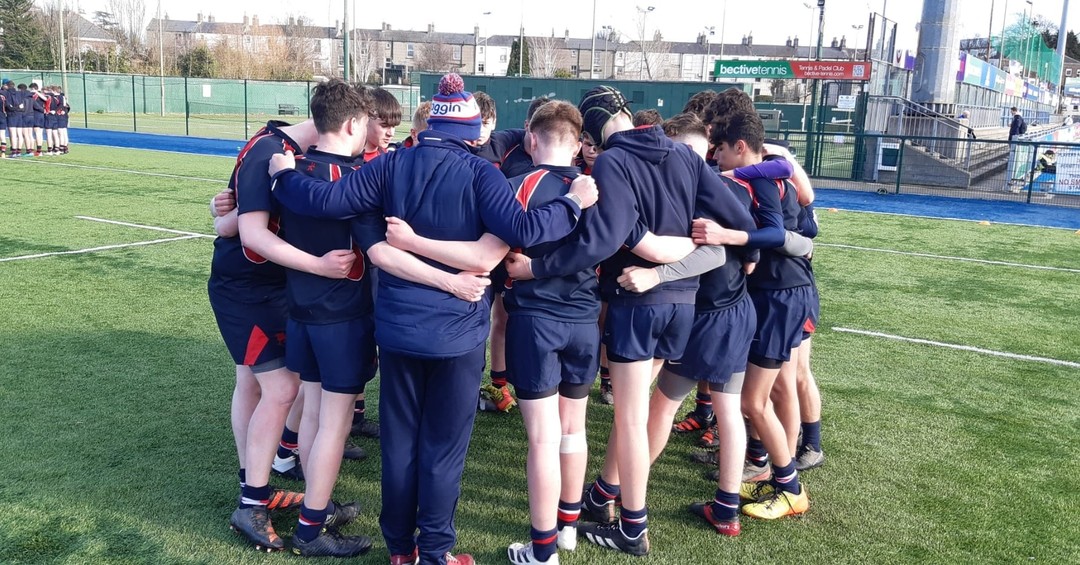 Huge congratulations to both the Junior and Senior Girls Teams who played fantastic rugby today in St. Mary’s College RFC in their Leinster Metro qualifier. Both teams are through to the X7s Leinster Final in Donnybrook on the 24th of March! 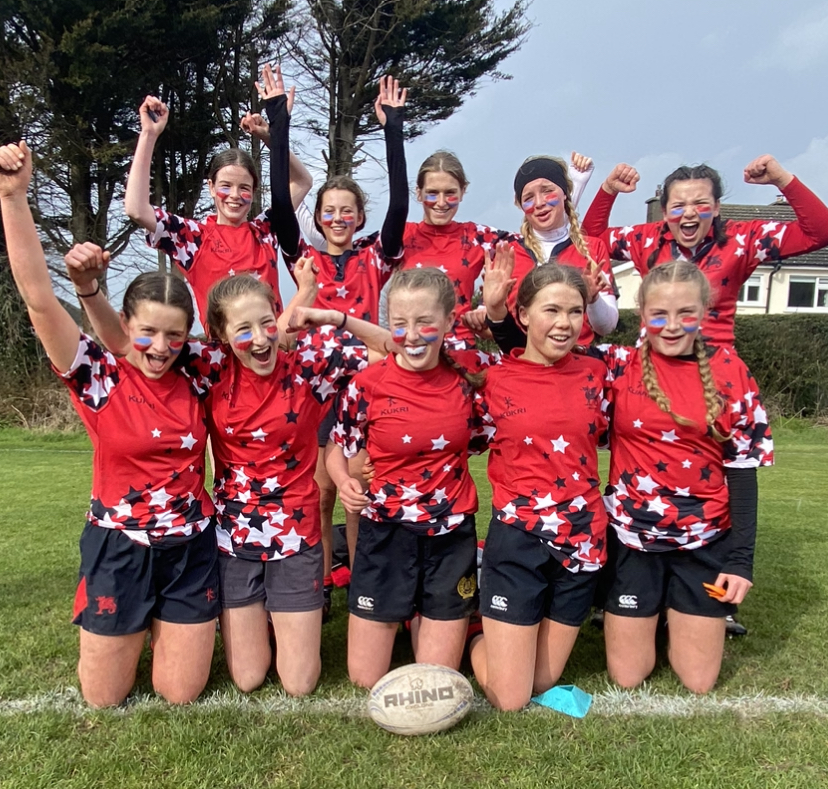