The Junior A Boys in the opening match of Section A of the Junior League had a solid 3-0 victory over St. Andrews's College. Peter Montgomery opened the scoring with a well worked short corner after 10 minutes. The lead was doubled after some neat interplay down the right hand side of the pitch saw the ball squared across for Ed Collins to finish off. The 1st half finished 2-0. In the second half the contest continued with some agricultural tackling and the game got a little bit loose. The scoring was finished off when Harry Jones made space for himself in the circle and got a strong forehand shot away. Well done. Check out the photos below. 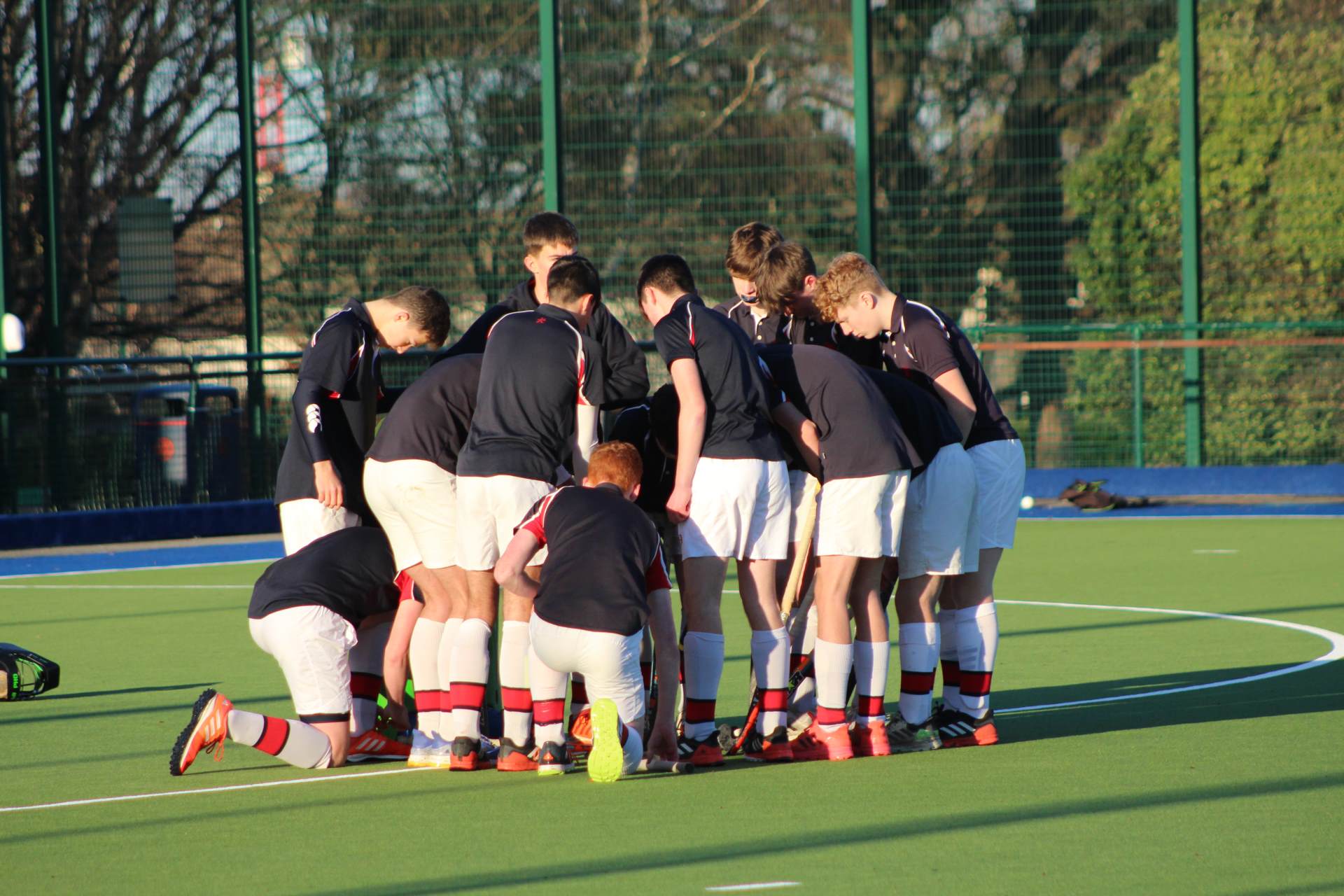 Junior B The team started the match brightly with periods of sustained pressure in the opposition's half. This eventually led to Jamie Byrne working his way along the baseline and linking up with Christian Ryan, who then scored. Thomas Fives then added to the lead a few minutes later. Before half time Newpark scored two quick goals on the break. The start of the second half continued much like the end of the first with Newpark scoring two quick goals on the counter. After this, it was all Wesley and Thomas Fives got his second. We equalized from a last-minute corner but this was disallowed as the ball never left the circle

The U14 A boys won 1-0 against St. Andrew’s College in their league match this week. Well done. Check out the photos below.

U14 A Boys vs St. Andrew's College

U14 B Boys drew 2-2 in a very competitive match against Sandford Park last Wednesday.

Good Luck to all the Wesley Girls representing Leinster, Leinster South and Munster this weekend at U16, U18 and U21 Interprovincial matches. The U16 and U18 girls take on Ulster away with Milla Fulton and Lucy Bond (reserve Goalkeeper) selected for the U16s and Emma Montgomery representing U18s. Special mention to Emma who was called up late to this squad in November and now will win her first Leinster U18 cap this weekend a great achievement.

Tanya Plunkett is selected for the Leinster South U18 match vs Connacht in Mullingar this weekend with her younger sister Alison selected as a reserve for the U16 squad.

The Senior 2nds had a great start to the new year with a 2-0 win vs Mount Anville. The girls started the game with great energy and looked extremely dangerous on every attack, with the forward linking very well creating plenty of chances. Annabel Squires got both goals, one in each half after a lovely link up with Lucy Ellis, Sarah Dignam and Laura Heany. A really impressive defensive performance from Susannah Gardiner meant Mt Anville had very few chances on goal. A brilliant start to the year!

The Senior 3s had a strong performance in a 1-1 draw with Mount Anville. A slow start, thanks to a shortened warm-up meant that Mount Anville scored early. The girls began to wake up midway through the first half and grabbed a goal thanks to nice play from Poppy Reid and a lovely finish from Eva Stafford. From there the game became scrappy with few chances being created. Mount Anville did have a number of short corners in the second half but all were run down very well by Ella Power. The standout performer was Julia Horan which showed some nice skills in midfield

Unfortunately, the Senior 4s lost 3-0 to a strong Mount Anville Side. Plenty to work on as we head into our next league game in the coming week. Shoutout to Lauren Mackey who made her outfield debut.

Junior A girls continued their great run of form after the Christmas break with a 4-0 win against a strong Mount Anville side. Superb goals all round with Sophie Stuart getting 2, Milla Fulton continuing her run of fantastic goals and Amy Macken scoring a lovely solo goal. An overall dominant win from the girls

The Junior B Girls lost 1-0 in a competitive match against Mount Anville. The girls put in a good performance sustaining attacks and defending well limiting Mount Anville to only counter attacks. Mount Anville scored from one of their counters after 5 minutes but the girls responded well creating many good goal scoring opportunities. We were just lacking the final pass and finish today. Lots of positives to take and lots to work on also.

The Junior C team got their new year off to a great start beating Mount Anville 2-1 on Saturday morning. Wesley went behind 1-0 before Ella Walsh equalized and Kirsten Cox then came up with a late winning goal. Isobel Jennings was fantastic making a few late and important interventions in defence.

The Junior D’s played out an exciting 1-1 draw against Mount Anville. Despite being under some pressure the girls were rewarded with a beautiful team goal. It started with winning the ball back in their own circle before 3 quick passes cut the opposition open. Grace McDonnel then calmly rounded the keeper and slotted home. Rachel Clarke only recently turned goalkeeper had a superb game in the Wesley goal with many saves and great kicking out of the circle. A solid defensive effort earned a well-deserved draw against a tough opposition.

In the Minor A’s first game back this year this fixture provided much good positive hockey. Wesley controlled possession for the most part and had more than enough chances to put the game away. A couple of defensive slips allowed Mount Anville to score 2 goals and some untidy finishing left us with more work to do than we needed. Overall a good start back for the year with plenty to work on going forward; winning 3-2.

The Minor B Girls drew 1-1 against Mount Anville last Saturday in a highly competitive first match of the year. Well done to Alice Gardiner on her goal.

U13 A girls played a really competitive game vs Mount Anville on Saturday, they, unfortunately, lost 2-1 but managed to be 1-0 up at halftime thanks to a goal from Katy, overall, a very promising performance with lots to build on for the rest of the year

U13 B Girls struggled in their friendly match against Mount Anville last Saturday, coming away with a score of 5-0. Plenty to work on as they look toward their first 11-aside match on Wednesday.

The U13 C team drew with Mount Anville in a very exciting and competitive game 1-1. Mya Costello scored a great goal in the first half. Mount Anville had no goalkeeper so played with 8 outfielders which is always hard to break down. As a result, Mount Anville put a huge amount of pressure on the Wesley defence however Elin Vickers in goal was immense and made many saves. A great performance all round by the whole team but Elin was definitely the girl of the match. Great start to the new year for all the girls.

The U13 D had a tough match against Mount Anville last Saturday, ultimately being defeated 2-0.

Unfortunately, the U13E girls suffered a loss to a strong Mount Anville side last Saturday, the girls all played really well with a special mention to Holly and Rachel who were both impressive, everyone worked really hard for each other it just wasn’t the result we wanted, lots of positives to build on for the rest of the season. End score 4-0.

On Wednesday, the Senior 1 Girls had a solid performance in their first game of 2022 against Kilkenny College. They did well to maintain possession and were solid defensively. Two PC goals from Mikayla Power, and a nice open play goal from Lucy Quirk. Well done. Check out the photos below. 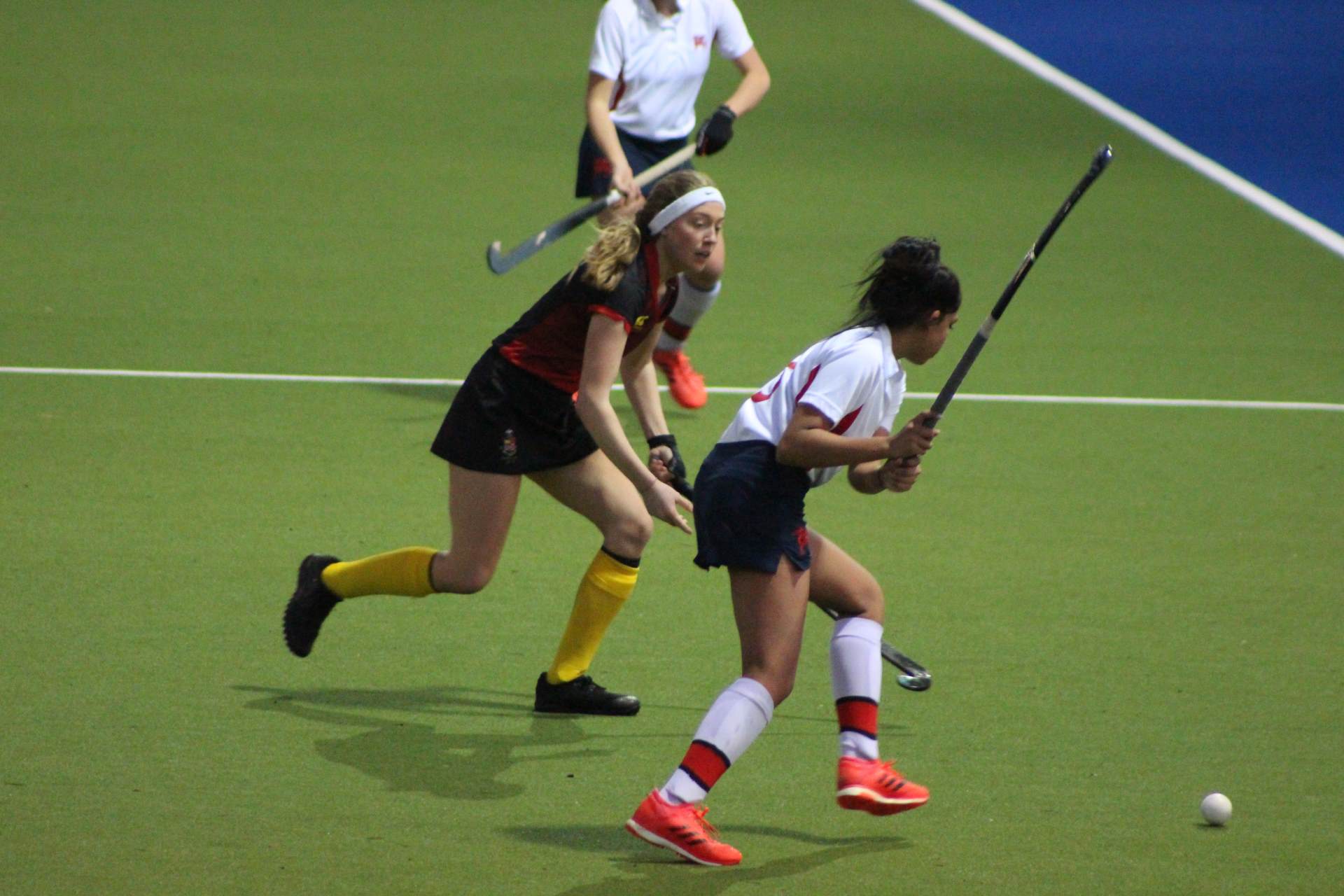 The second time this season that the Minor A Girls have faced off against Kilkenny College, and a tough match to boot! We managed to control possession for the most part but struggled with our defence in counter-attacking chances. Both goals conceded came from lapses in this regard and left players free for simple conversions. We have our work cut out for us over the coming weeks, but many good passages of play, and a nice base to continue forward with!

The Minor B Girls lost 2-1 against Kilkenny College last Wednesday in a very competitive match. Well done to Rachel Reed on her goal.

The U13 A girls enjoyed their first 11-aside friendly match vs Kilkenny College. Wesley had some excellent periods of play creating plenty of goal-scoring opportunities through good play down the right and left sides of the pitch but weren't quite able to put the ball in the back of the goal. Kilkenny defended well and made so good tackles on our players to dispose of them at crucial times. Wesley went 2- 0 down but managed to score a goal about 10 minutes from the end and went on to create lots of chances and short corners. Short corners are a new set piece for the girls now playing 11-aside and they did well to execute them and almost scored the equaliser from a reverse sweep variation. The team has lots to work on, but it was a good start to 11-aside hockey exposure.

The U13 B girls also had a great time playing their first 11-aside friendly hockey match of the school year, coming away with a win of 1-0 against Kilkenny College

A really good game of hockey for the U13 C girls last Wednesday. They won their match 4-0 vs Kilkenny College. The goals came from Alice Gleeson x2, Safia Dahma, and Lucy Coughlin.

U13 D Girls won 3-1 against Kilkenny College. A great result for their first-ever 11- aside friendly hockey match of the season.

The U13 E Girls lost 5-0 to a very strong Kilkenny College side. They started off the match with no goalkeeper, which was when the first 3 goals were conceded. Moving forward, the girls need to work on being a bit more aggressive on the pitch!

Last Saturday, the Wesley College JCT XV started the New Year with a great game against Bandon Grammar School on the front pitch in Donnybrook ending in a thrilling 22 all draw. Tries coming from Sam McMullin, Charlie Hempenstall, Sam Ryan and Christopher Maclachlann Hickey with David Gilmore also being a stand out performer in the middle of the pitch.

The Wesley Red U14 Boys’ team suffered a 12-24 defeat to St Mary's. Wesley College were 0-24 down at halftime but they then managed to play much better rugby in the second half. Honourable mentions for James Beattie, Johnny Woods and Kian Frederick's who all had good games.

Despite a 27-50 loss, Wesley Blue U14 Boys’ team learned a lot in defeat. There were strong performances from Henry Clarke, Ben Fromholz and Jonah Nathan. Wesley will no doubt be working hard in upcoming training sessions and bounce back stronger in their next game.

On Wednesday, the Wesley U14 Reds won 52 - 12 CBC Monkstown. Excellent win for the Wesley Red team against CBC Monkstown on a scoreline of 52-12. Wesley led by Jake Fulton played a high tempo attacking game scoring some fantastic tries. This result was also based on solid defence, with CBC unable to establish an effective attack for large parts of the game. With performances such as this, Wesley can look forward to more positive results in the future. Tries coming from Jake Fulton, Johnny Woods, Conor Fox x 2, Thibault Campbell & Oliver Gaynor with Johnny Woods and Jonah Nathan kicking the conversions

Wesley U14 Blues won 47 - 7 CBC Monkstown. Three early tries from James Keegan, Harry Grainger and Joshua Walsh with Cailean Pattison kept the scoreboard ticking over with a great try down the wing to finish the first half. With some great efforts from the subs, Wesley managed to beat CBC which some well finished tries from Joshua Walsh and Charlie Byrne leaving the game 47:7. Harry Grainger had an excellent display from the tee only missing one of six attempts at the posts along with the final try of the day. Overall, a great performance from Wesley College.