Congratulations to the Intermediate boy's cross-country team, who competed at the Irish Life National Schools Cross-country championships in Mallusk, Belfast on Saturday. The team of Jamie Byrne, Antoine Roquette, Saanj Ready & Killian O'Brien (all in Transition Year), finished just outside of the medals in 4th place.

Jamie Byrne collected a medal completing the race in 6th place, and it should be noted that the entire team completed the 5km course in under 20 minutes...a team Personal Best!

Success continued yesterday in Athlone at the Irish Life National U20's indoor athletics championships where Renee Crotty (5th Yr) ran a personal best time of 57.1sec in the 400m. Renee, drawn in lane 2, ran a fantastic race, finishing in 3rd place and being one of the youngest winners of the bronze medal in history. 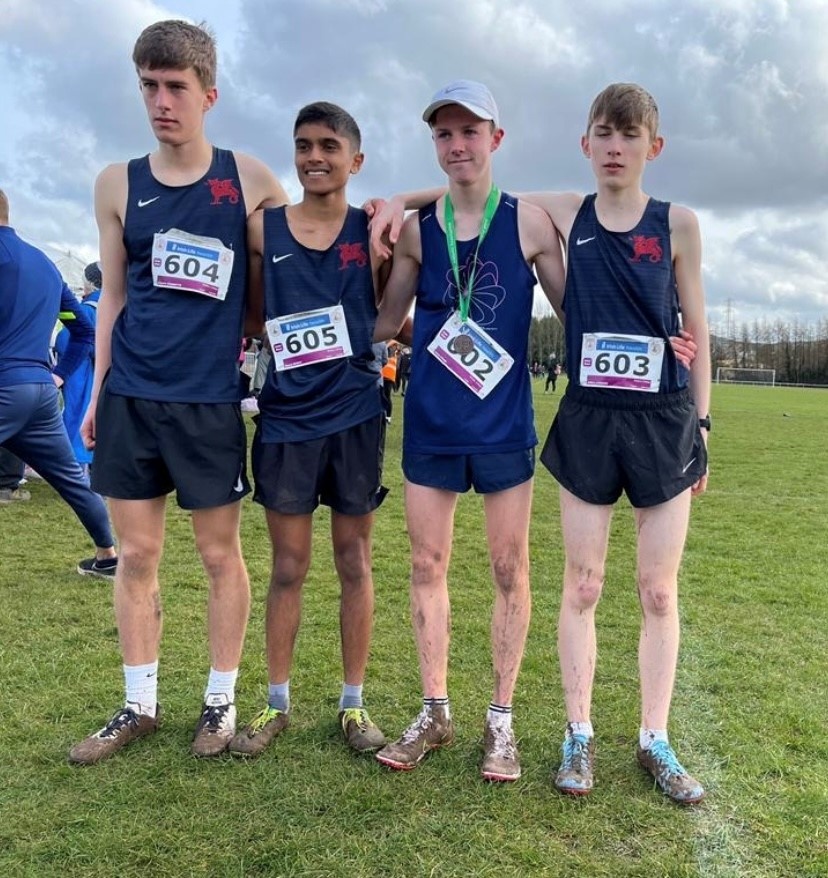 The Boys, Oliver Tweed, Oliver Tang Tadgh Reinecke, and Louis Small, played in the Leinster finals last Tuesday,15th March in Baldoyle Badminton Centre. Unfortunately, they lost out overall, however, they should be so proud of how far they have gotten this season. A massive achievement.

Congratulations to the Junior Girls Basketball team who won against Sandymount Park ETSS. They advance to the league Semi-Final. The girls made tremendous passes, interceptions, and defensive plays which overcame their opponents. The final score was 24-6.

On Saturday, the U14 A Boys took on the Royal Belfast Academical Institution. Unfortunately, they didn’t quite get the result they wanted, and ultimately, lost 1-4. However, they should be proud of their performance as they put up a good fight until the end.

On Monday, the Senior 1 Boys put on a tremendous performance against The High School, Dublin, and won 3-1. An important match as it was their Cup Semi-Final. We look forward to the final next week.

Unfortunately, on Tuesday, the Senior 2 Boys lost their Cup Semi-Final against The High School, Dublin 0-3. They should be very proud of how far they have gotten this hockey season, well done.

The U14A had an excellent game against The High School, Dublin in their Cup Semi-Final on Tuesday. Winning 0-3. We look forward to the final next week.

Unfortunately, the Preparatory Boys suffered a loss against Rathfarnham JS, with a final score of 2-4.

A huge congratulations to the Junior A Boys who won their Cup Final 3-0 against The High School, Dublin. The boys should be so proud, what an achievement! 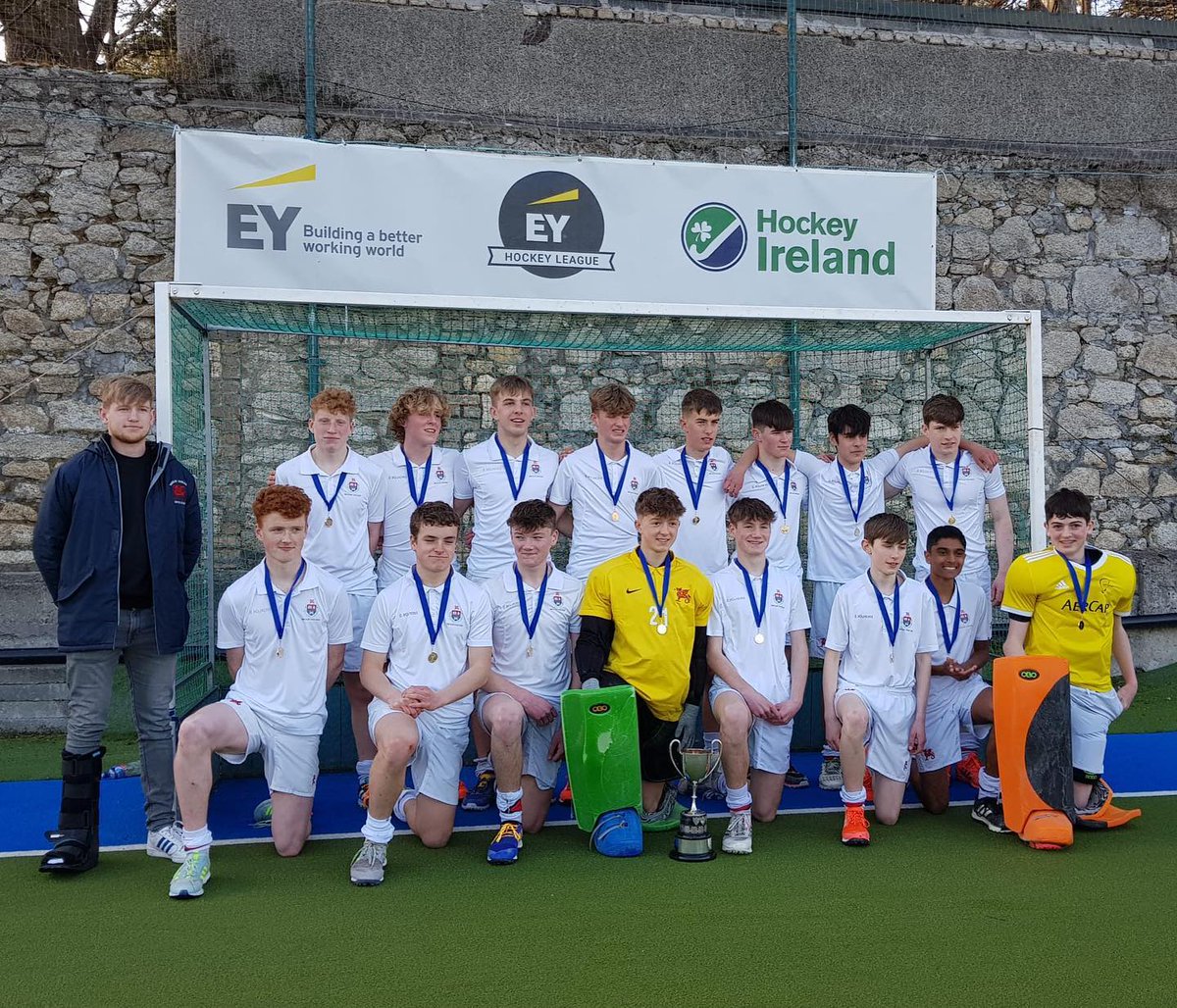 The U13 A Boys followed suit and also won their Cup Final against The High School, Dublin. A tremendous week of sport for boys hockey in Wesley College. 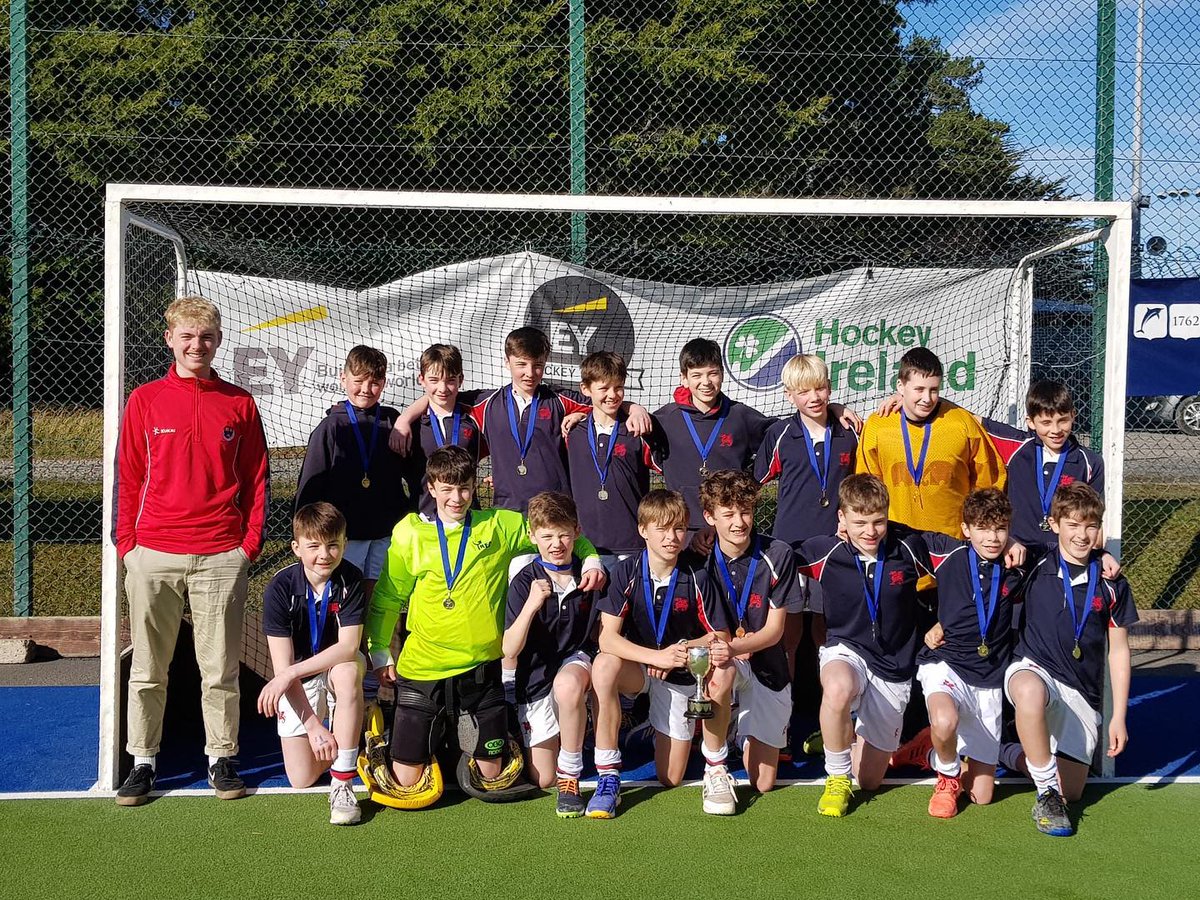 On Saturday, the Minor A Girls put on a tremendous performance against Loreto Foxrock. Although the game was a friendly, it was an important match to end their season. After falling short to Muckross in the cup semi-final, we kitted out today to play their eventual opposition, Loreto Foxrock. They had a point to prove and it was Eve sent from the start. We pressed well, turned the ball over in midfield areas we wanted to, and were clinical with circle entries. Winning 4 corners in each half, and unlucky to not score from some, it really was all Wesley in an attacking sense. The main focus for the game was not conceding and finishing 3 goals up was a nice way to cap off the year. They should be very proud of the many things the girls have worked on and developed throughout the year, and I’m sure there are trophies waiting for this team in the remainder of their Wesley careers!

Unfortunately, the Minor B Girls lost 1-4 to Loreto Foxrock last Saturday. However, they should be proud of their performance as they played very well and fought until the end.

The First Year B-Girls lost a battle of a league match vs Mount Anville 1 0. The goal came in the last 6 mins. Girls had a mixed first half with poor defending in the circle but improved greatly in the second half. Ruth Ahern in goal was the man of the match as was Tess Archer who was excellent again today at sweeper with great tackling and ball distribution from the back. The work rate from all the players was excellent today with some of the team having played earlier to help out the D and E teams who were short. Big game to come next week against High School in our last group game. Well Played girls today.

U13 D girls won 2-1 v Mount Anville. With the help of a couple of B team players due to late cry-offs from the D team the game was quite competitive! The goals were scored by Anna and Caoimhe. Amelia Furey along with Jenny our goalkeeper had a very good game in midfield. Jenny had many great saves in goal…her GK skills are improving all the time.

The under 13 E girls team played against a physically strong Mount Anville side. Going 4 goals down early in the game they got a goal back from a short corner just before halftime. After half time they focussed on their passing and made full use of the wings which lead to them scoring two goals on the counter-attack and winning the 2nd half 2-1. Final score 5-3.

The Junior A girls completed their double and undefeated season with a 2-1 win against Holy Child Killiney in the League Final on Monday. The girls started off strong with a couple of chances not quite falling our way. But Holy Child struck first with a well-worked baseline attack resulting in a neat near-post finish. This seemed to give the girls the push they needed and they powered on to play some much better hockey. The qualifier came early in the second half with Milla Fulton picking up a loose ball in midfield, beating multiple opposition players, and calmly finishing with a smooth backhand shot down the keeper's left side. The chances continued to come for both teams but no goals came until the final ten minutes when Wesley had the ball in the Holy Child 25 after a quick counter-attack, Sophie Stewart laid the ball back to Amy Macken who gave a lovely hit pass into the D that Ruth Keogan finished with a lovely first-time deflection. Holy Child pushed for an equaliser but the girls defended fantastically as they have all season to see out the remaining ten minutes and win the comeback after a great comeback.
A perfect end to a perfect season. 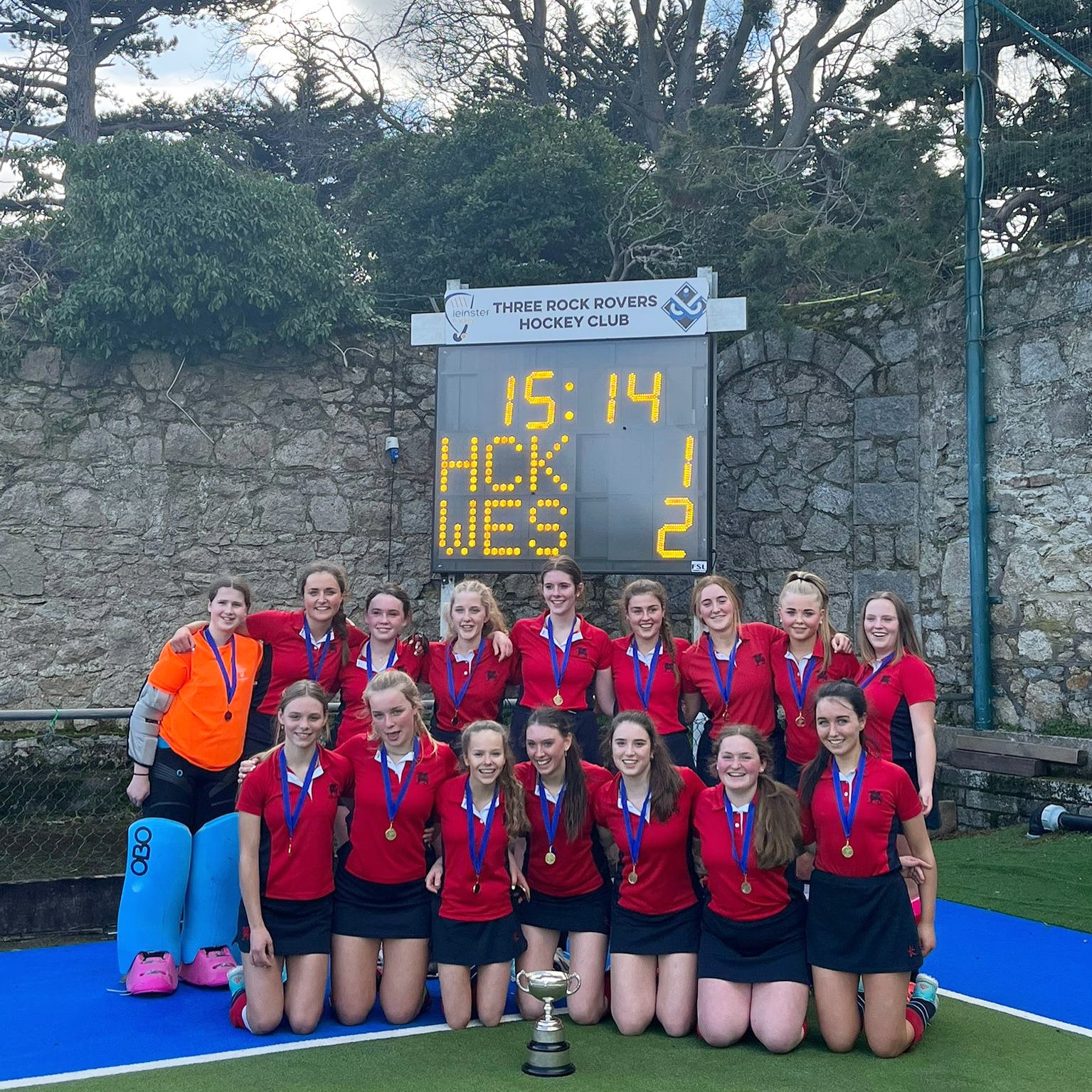 U13D girls drew 2-2 with Loreto Beaufort, Jennifer scoring both goals. It was a good competitive game with everyone trying their best. Jenny was a star in goal again. She goes from strength to strength.

The U13 E girls also drew 2-2 v Loreto Beaufort with the scores coming from Abbie and Delilah. Again Jenny saved lots of shots on goal. Watch this space.

Another final, another day in Three Rock, and another chance at silverware. The Senior girls had to deal with some availability issues but were keen to add another trophy to the cabinet. We started brightly and duly took the lead through a Sinead O'Grady drag flick. Rathdown equalized from their own PC set piece. It was nervy stuff at times. Wesley were generally on top but without playing at their best. Another Sinead drag-flick in the second quarter saw the lead restored. Into the second half and Rathdown began to press more. Wesley had their chances on the break including an excellent Milla Fulton run which lead to a penalty stroke. Wesley failed to convert which left the coach's nerves further frayed. Into the final quarter and another PC strike from Lindsay Power gave us a bit of breathing room and we closed out the game for the win. A terrific way to finish off the season with a fantastic group of players. They can be proud of their efforts and are deserved Leinster League champions and Plate winners! 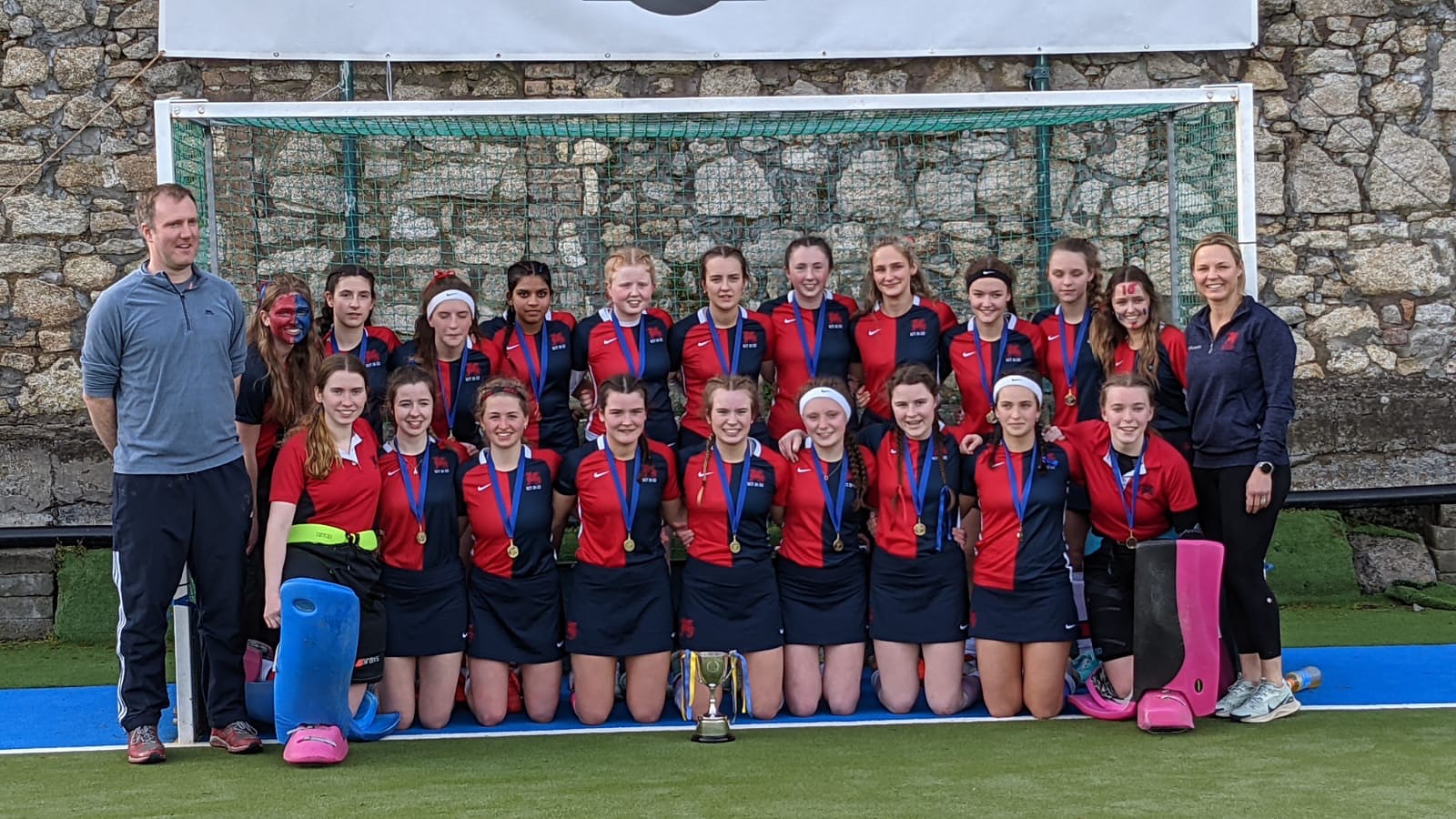 Unfortunately, the Preparatory Girls suffered a loss against Rathfarnham JS, with a final score of 0-4.

The Wesley Girls Rugby Teams had an absolutely fantastic trip away on their rugby tour to Cork where they played a West Cork Representative Team made up of players from Skibbereen RFC, Bantry Bay RFC, and Dunmanyway RFC. The Wesley girls played a fantastic match in very difficult weather conditions. The activities organised were also very enjoyable and all had a great time! All players looking forward to their X7s Leinster Final at the end of the month!