Congratulations to Jamie Byrne, who won the Phoenix Park Schools Cross-Country competition on Thursday. Jamie won the competition well and will represent the school next term in the east Leinster school’s competition.

Fresh from their third last time the show jumping team went one better to finish second in Kilkenny on Sunday. 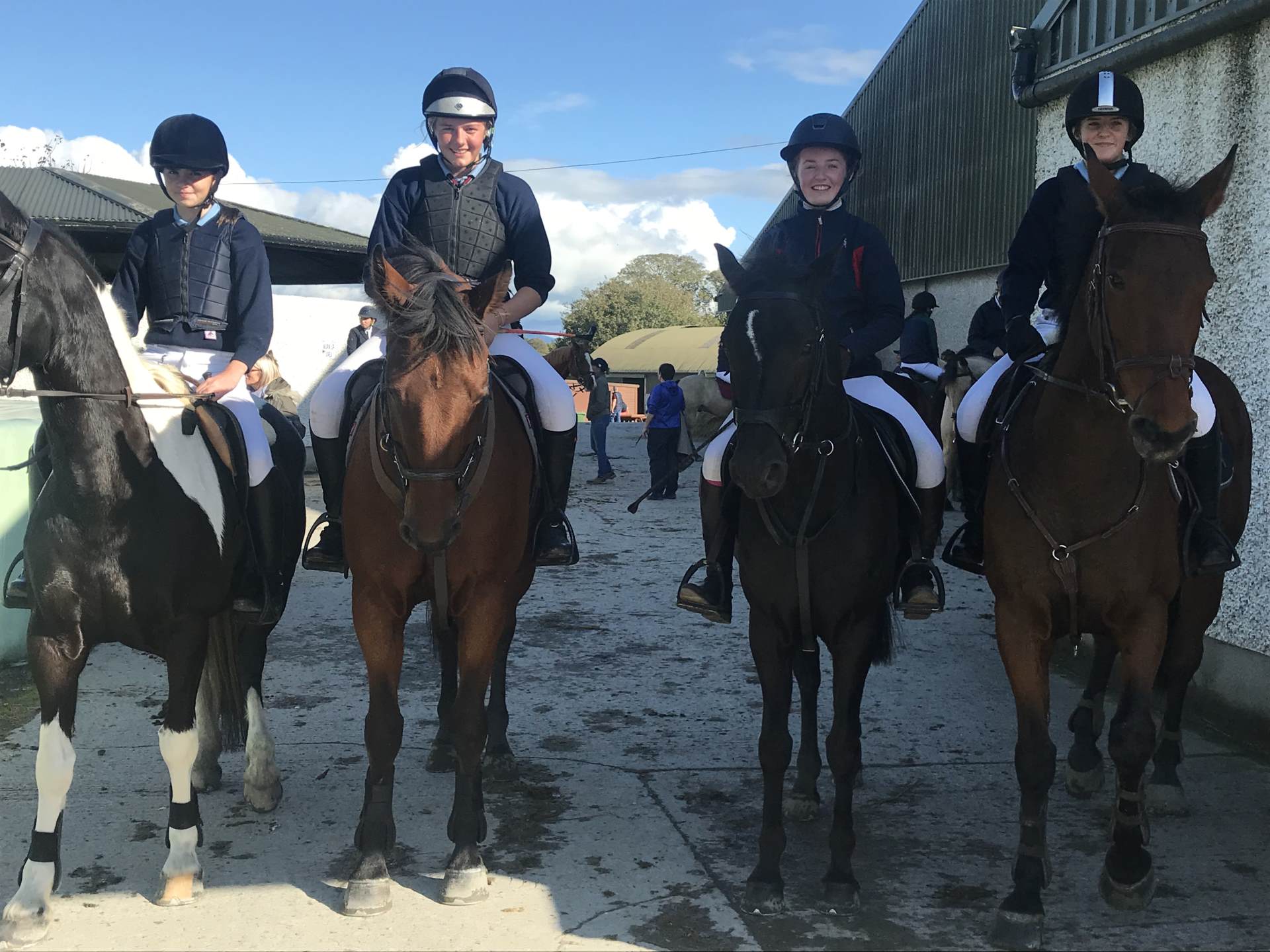 Riding this time was Siun Handley with Teachers Pet, Grace O’Shea and Why So Coy, Juliet Keyes and Lady, Holy Dugan and Newhaven Nero against a total of twelve teams competing. Great riding under pressure saw the Wesley riders advance to the jump off stage with only three other schools. The jump off rounds were very close with Wesley having to settle for the runner up spot this time despite some very competitive riding by Siun and Holly. Well done to all four riders.

Well done to Pia Simmons, Lindsay Power and Mikayla Power who represented Wesley in the East Leinster Golf Competition in Clontarf Golf Club. The girls were entered into the individual and team competition. 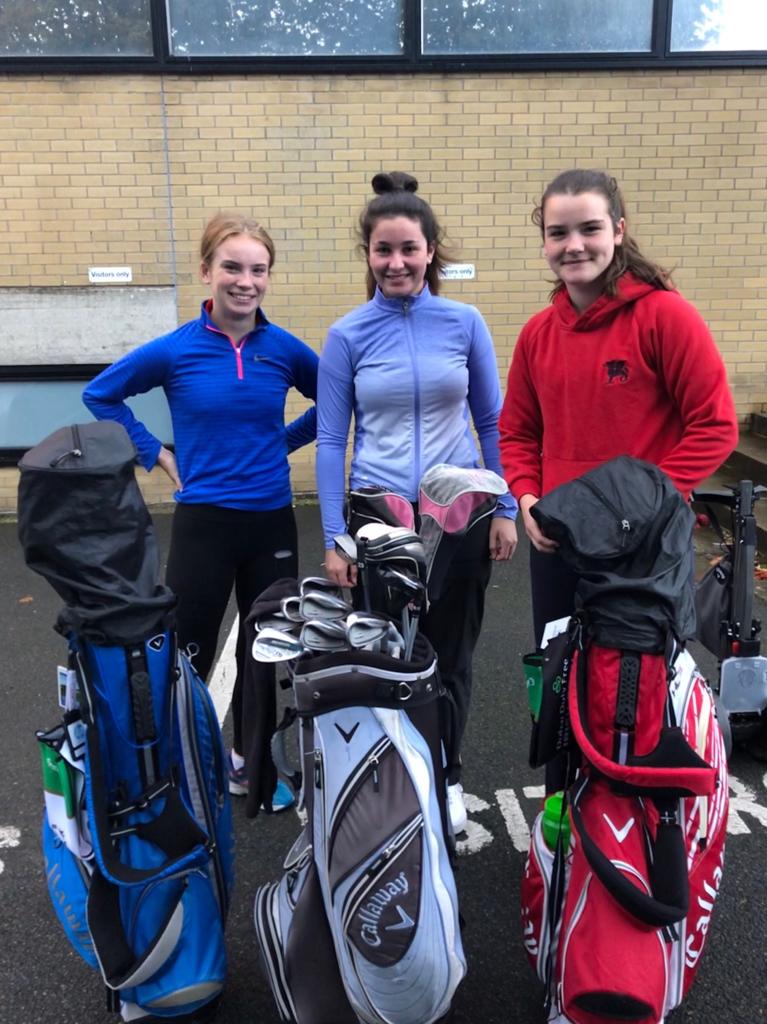 Well done to the SCT XV who won 33-15 against Ballyclare High School to maintain an unbeaten start to the season heading into their opening League fixture against Kilkenny College next Wednesday. Jamie Metchette and Gabriel Dunne scored tries, while Oisin Spain ended the match with a hat-trick of scores. Well done also to Jack Atkinson who added four conversions to the score.

The 2nd XV also won, coming back from a 10-22 deficit with ten minutes to play to beat Ballyclare High School. Well done to Bosola Ojewale and Adeola Ogunyemi who both scored tries. A special mention to Hugo Hjelseth who scored twice, with his second and winning score arriving in the final stages of the game. Alex Devenay added a further two conversions to the points tally from the tee.

Hard luck to the JCT XV who lost 28-12 away to St Gerard's. The Wesley try scorers were Andrew Fox and Jonny Cazzini. Jonny added a further two points to his collection with another conversion. They now look forward to the commencement of their league campaign at home to Kilkenny College next Wednesday.

The U-15 A and B XV's had a difficult day against strong Kilkenny College sides. The A XV took an early 7-0 lead after a Harry Larkin try which was converted by Peter Montgomery. The side found themselves 7-12 down at the break but struggled in the second half against an impressive side. The U-15 B XV lost 12-28. After being 0-21 down, the boys showed great character to get themselves back into the game. Well done to Harry Ryan and Louis McSweeney who were both on the scoresheet, with Louis adding another two points to his tally from the tee.

Well done to the Development XV who had a marvellous 20-36 away win against Presentation Brothers College Cork on Saturday. Daniel Campbell, Adeola Ogunyemi, Ryan Jones and Hugo Hjelseth all crossed over for scores, with Zach Bourne adding a further two tries. Zach's second score was particularly impressive, beating six defenders along the way. Jamie Fish added six points to the points tally with three conversions.

The Junior B, Minor B and C played internal matches Wednesday while they continue to prepare for the start of their leagues. Well done to the Junior A who had a great win against Loreto Foxrock, Lauren Parks scoring the only goal of the game, from an excellent pass by Tara Galbraith.

The Senior 1’s had a comfortable win against a touring side from South Africa on Wednesday also, producing a clinical performance.

The Senior 2’s kicked off Saturday mornings matches, drawing 0-0 with Alex. Two good teams, both had chances. We hit the post and had another that dribbled across the line. Good work rate all round.

Senior 4s lost 1-0 to Alex, they only had 8 players so we gave them two and we played 10 v 10. We had loads of opportunity on goal but need to work on converting it. Positive match overall.

The Junior A’s had a very good win against Alex 4-1. Some excellent runs from the forward line and Mikayla Power making great attacking runs coming through as centre mid. Siuin Woods scored the first goal from a pc, while the remainder coming from Tara Galbraith, Lauren Parkes and Grace O'Donoghue. Tara Galbraith was exceptional with her movement up front also.

The Junior B’s drew 2-2 with Loreto Dalkey in the league. We went 2-1 up after halftime but the girls switched off and Dalkey got their equaliser. Ella Power and Bobbi Gillespie scored the goals and Juliet Moore was voted player of the match.

The Junior D team lost their first league match of the season to a very strong Alex Junior C team on Saturday. Alex were extremely quick to make their mark on this game scoring 3 goals in the first 15 minutes as a result of very poor marking. At half time the score was 4-0 to Alex. Half time gave the girls a chance to gather themselves for the second half where the aim was to improve our first half performance. This half was a much-improved performance by Wesley overall the play and the and marking was much more disciplined and positive. After trojan work especially in midfield and defense Wesley were unlucky to concede with just one minute left. Natasha O'Shaughnessy in the Wesley goal was outstanding especially being a Minor keeper who has just stepped up to Junior level she is a great asset to the Juniors. Lucy Coleman and Sarah Kate in defense together with Ciara Grant in midfield worked tirelessly throughout and made a great impact on the game. A bit more time together for this group and hard work will pay dividends.

The Minor A’s beat Teresians 1-0. Our girls linked up very well today. Jamie Doyle and Ally Boucher were solid in defence, while Annabel Squires scored the winner from a strike from the top of the D in open play.

The Minor B’s won their first league match of the year 2-0 vs Dalkey. A great team performance, the girls showing some great link up play, set pieces and teamwork. Ruth Keogan scored in the first half and Alannah Farrelly scored in the second half.

The Minor C’s won their first league game v Our Lady’s, Terenure 1-0.  A very tight match with lots of pressure in the first half particularly.  Alya Egan made some super saves and a much better second half saw Heidi Agar score with about 8 mins to go. Amy Crowe played solidly at left midfield and Thea Jones and Shona Bowers we’re strong at the back.

The first years were in action against Mount Sackville and Alex on Saturday morning. The Swordfish had a super match in Wesley against Mount Sackville. The girls had some excellent link play all the way from the back from Mia Keane who was standout in defence. The Wesley team went into their half time team talk with a 5-0 advantage. Mount Sackville who had been a little unlucky in the first half not to score came out blazing in the second half and scored 2 super goals despite Wesley's best efforts to defend. Katie Sidebottom also had a solid game in midfield and then defence and Grace McDonnell and Martha McCaughy too were very effective up front. A good performance all round for the Swordfish.

The Goldfish also played a Mount Sackville team in Wesley. It started fairly evenly but then Wesley built up momentum and scored 3 quick goals taking control of the game. Mount Sackville pulled one back before half time after a series of short corners.Wesley then pulled away with 3 more quick goals in the second half followed by a further 2 close to the end.

The Jellyfish won their encounter against Alex 5-1. This team displayed some really good defending throughout the match and at the other end of the pitch finished well scoring some great goals.

The Starfish lost 1-0 to Alex. Wesley had many many chances to score but could not take full advantage of these to find the net. Alex on the other hand made sure to score from the only chance they had in the match. Emily Taylor was the standout player for this Wesley side being very effective in midfield.

The Dolphins lost an entertaining 4-2 battle against Alex. They came from 1 nil down to 2-1 up after half time however they fatigued in the later stages of the game conceding 3 goals in the last 5 minutes. Kirsten Cox was the standout player for the Dolphins today.

The Senior boys drew 1-1 with St. Andrews. Our only goal came from Tom Power from a foot out. An exciting friendly that will no doubt set them up for the next meeting of the two teams. The boys were back in action on Friday, this time losing out to The High School 3-1 in a match that saw large phases of possession lost by Wesley in attacking zones to a solid High School defense. The High School goalkeeper had a fantastic game keeping the Wesley strikers frustrated after his quality saves. Josh Ivers did break the deadlock at 2-0 for Wesley scoring a great goal from lovely build up play, defense to midfield, and Josh finishing well. Disappointing result for Wesley but positives to take forward in structure and chances created.

The Junior A’s beat the touring South Africans with goals from Josh Gill, Ben Nathan and Peter Walker. It was a good, competitive game with some great skills on show.

U-14 B’s beat St Columba's with Carl Murtagh and Theo Marcoux scoring two each, with Joe Martin adding a fifth. Columba’s goalie had to pull off several saves to keep out the chances Wesley created through a lot of great attacking play and circle entries. Dylan Dickson Santos was fantastic in defence letting nothing by him and giving the most beautiful passes to clear his defence. Well done to Tadgh Reinecke for keeping a clean sheet in his first match in goals. Toby played very well at centre mid distributing the ball and getting two assists.

The U-14 A’s travelled to Cork for the night on Friday and played a match Friday evening and Saturday morning against Ashton. The boys won comfortably on Friday with a number of the team adding to the score sheet. The centre line, from goalie through to forward particularly impressed, moving the ball effortlessly around the pitch.

The three U-13 teams all played St. Andrews. The C’s lost narrowly with Morgan Wilson and Jack Lucy having great games. The B’s won courtesy of a belter of a goal from Harry Shannon. It was a well worked goal that relieved the continuous pressure Andrew’s put on our defence. Cillian Sisson was excellent in nets, maintaining a clean sheet. The A’s lost despite Freddie Turley scoring two lovely goals.