A number of the girls' rugby teams played matches on Wednesday away in Seapoint Rugby Club.

The 2nd Year Girls Blue Team drew most of the matches they played. The 1st Year Girls Team played very well. They had a lot of fun and are improving immensely every week. 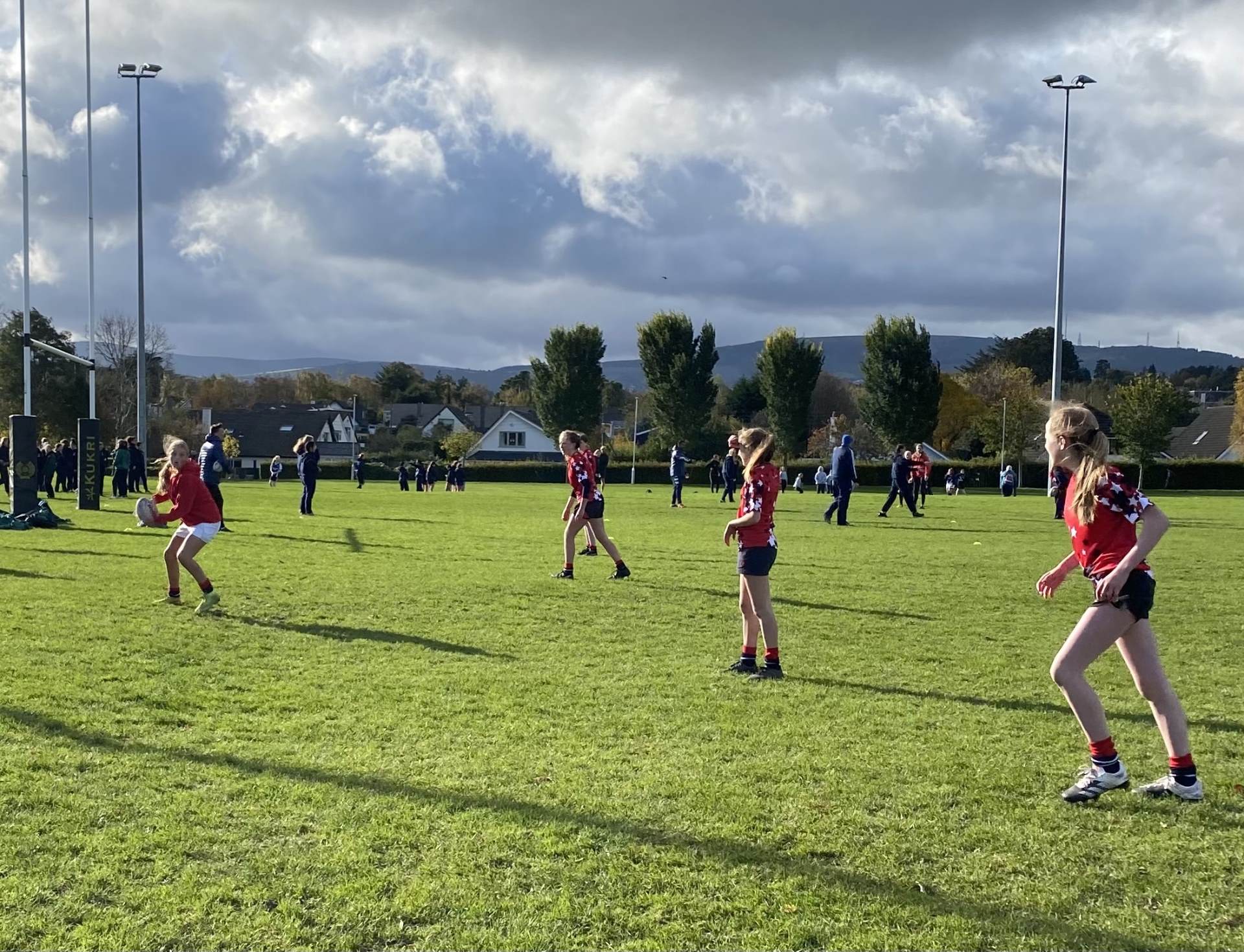 The JCT finished up their preparations for the league with a Temple Carrig draw.

The team’s hunt continues for their first win after a hard-fought battle with Temple Carrig. Wesley were unfortunate to have illness and injuries in the squad however it meant this was a great opportunity for some players to step-up.

Welsey started the slower of the two teams as Temple Carrig struck early with good back-play 0-5. Wesley responded soon after through Darragh Fox after the forwards found their shape, Harry Jones and Joseph Cullen impressing with their carrying. Charlie Hempenstall failed to convert however, and Wesley found themselves level at 5-5.

Temple Carrig will be disappointed with their discipline throughout the game which let Wesley off the hook more than once, in one case just outside the Wesley 22, giving a penalty for off their feet. Charlie Hempenstall came from the backfield, tapped the penalty, and tore through the Temple Carrig defence, weaving through from his own half and dotting down under the posts and converting his efforts. 12-5 to Wesley at half time.

The message was simple at half time, keep our shape and put pressure on the Temple Carrig attack. Temple Carrig once again struck early due to mistakes in the Wesley set piece and converted bringing the game to a draw once again. The game then became much more of a dogfight as captain Jack Freyne in the centre looked to get Wesley into the Temple Carrig 22. Welsey soon found themselves in the red zone, through some great footwork by Jack Lucy and Max Brock. The forwards then got Wesley close to the line and Sam Ryan sniped from scrumhalf to get Wesley’s third of the game. The conversion was missed, and the game was poised at 17-12, with 5 left on the clock.

Wesley struggled to exit and put pressure on themselves through a scrum and then subsequent missed lineout. Another scrum saw Temple Carrig get to the Wesley 5 metre and dot down in the right corner and draw the game with a kick to come. The kick was missed, and the final blew.

Disappointment for all that this wasn’t the first win of the year. Wesley will however, go into the league with lessons learnt. We welcome Gerard’s on Wednesday for our first league game.

The Wesley U15A side welcomed Gonzaga college on Wednesday. The game began with some fierce collisions and some big ball carrying from both sides with wesley camped in Gonzaga’s 22 for the first five minutes of the game, the Gonzaga side defended bravely and managed to break out and go 5-0 up. Wesley responded soon after with Captain Isaac Reid charging over the try line to bring the scores level at 5-5. It went back and forth with both sides struggling to get a foothold in the game before Gonzaga struck again and went 10-5 up. Some strong tackles from Tom Burke, Andrew Glass and Daniel fisher could only keep Gonzaga out for so long before they scored again and went 17-5 up. Wesley responded well to this but a handling error allowed Gonzaga to walk in untouched to go 22-5 up. Tom Burke again appeared to force his way over from a pick and go to bring another score back, bringing it to 22-10, Gonzaga responded excellently to this scoring again to go 27-10 ahead. A moment of magic from Charlie Simmons gave Wesley a glimmer of hope as the score went to 27-17 with 3 to play but Gonzaga managed to get the ball back from the kick off and finish with a flurry. A strong performance from Gonzaga but plenty of positives for the U15 Wesley side. Final score Gonzaga 32 - Wesley 17. 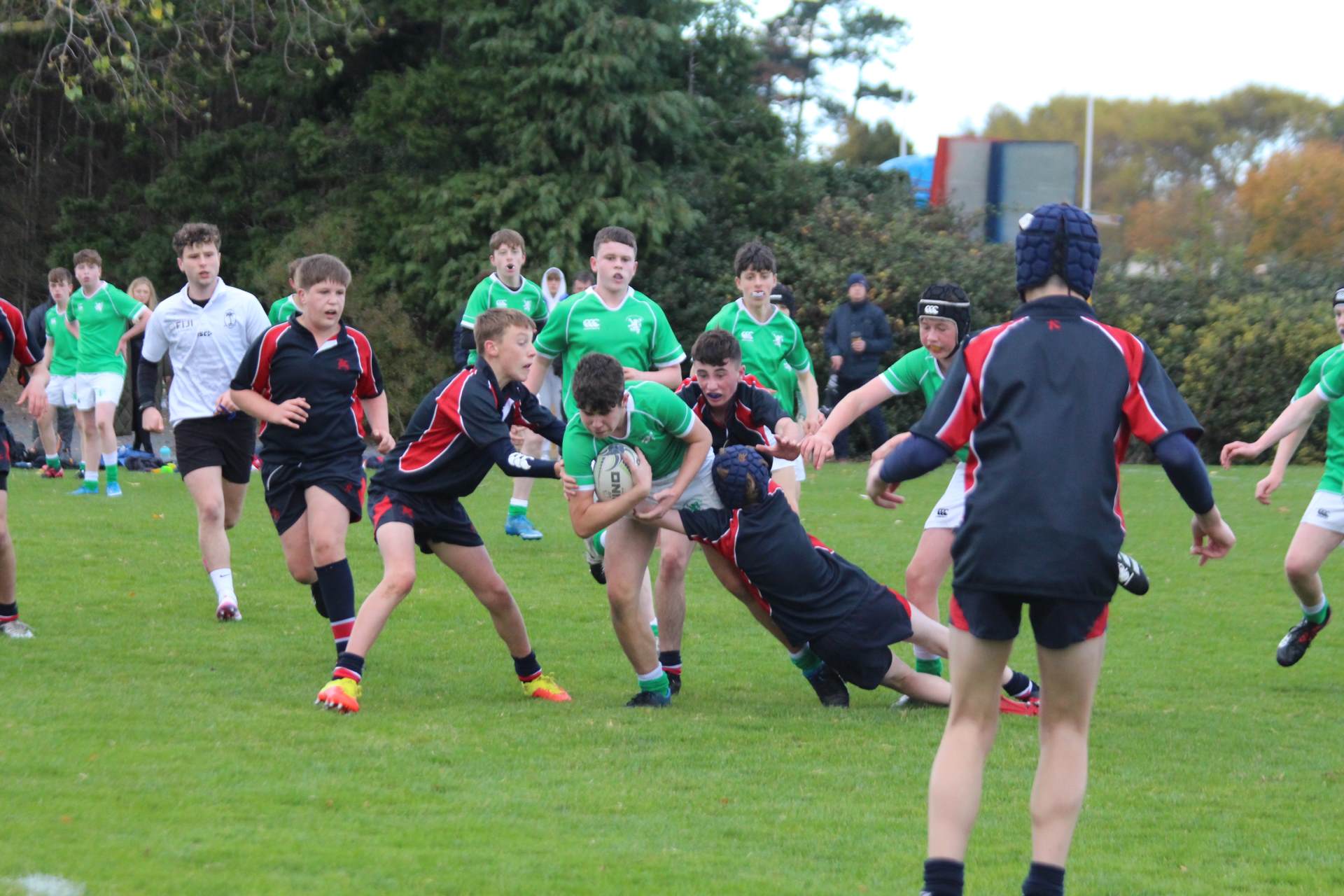 U15 A vs Gonzaga Gallery

The U15 B boys had a thrilling encounter with Gonzaga College. A high scoring affair for Wesley winning out 43 - 10. The Bs showed some great attacking skill resulting in classy well worked try’s from Jacob fry, Harry Glennon, Evan Caddow, Fachtna Spain and Nathanial Miller. Jacob fry showed incredible determination and heart in his three try’s while Harry Glennon backed up an impressive kick with a great following run beating the Gonzaga defence to get the ball over the line. The game showed some strong tackling from Christian Kelly and Luke Colton. Although outplayed for the majority of the game, Gonzaga finished strong with two well worked try’s in the finish. 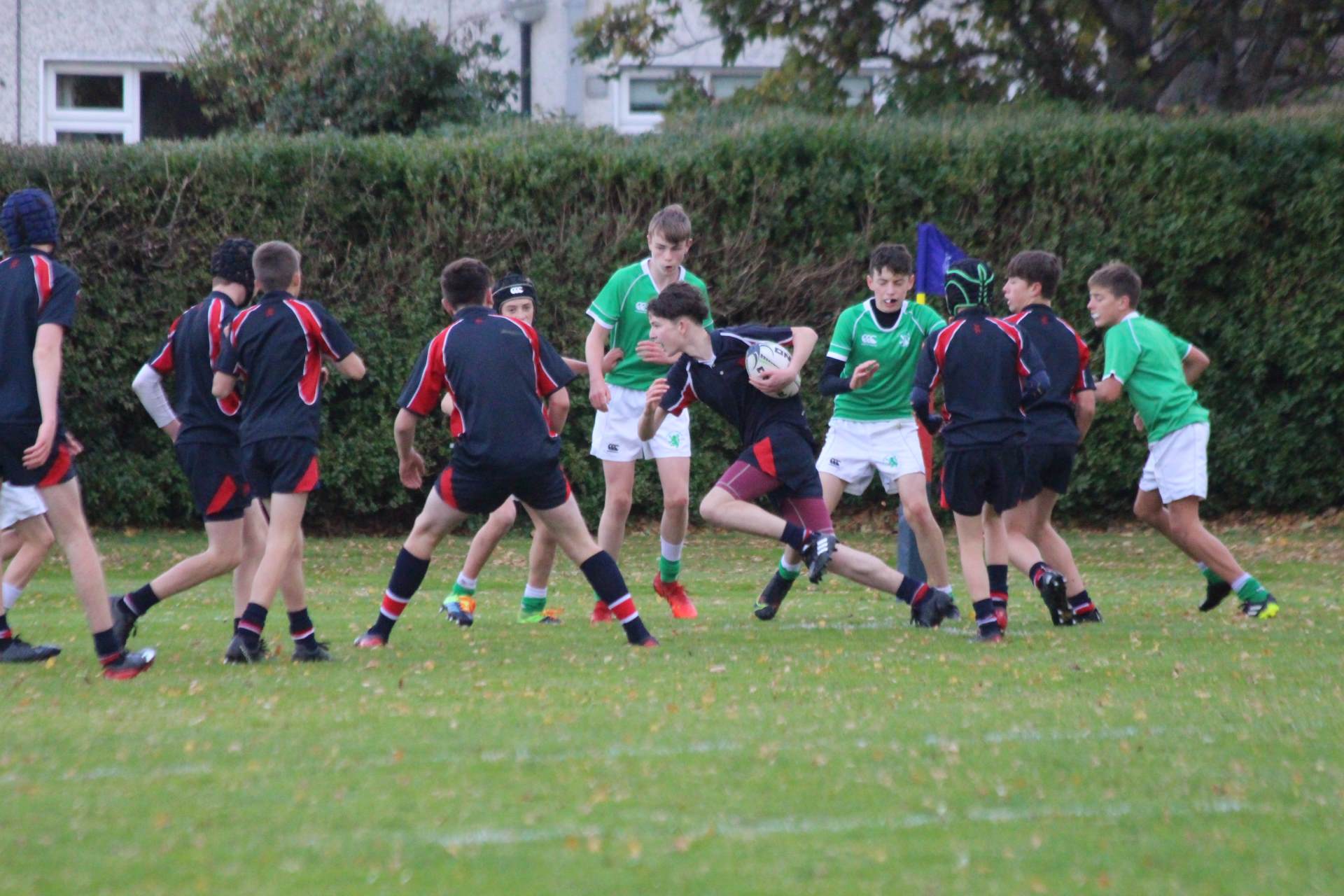 U15 B vs Gonzaga Gallery

Wesley U14 reds faced their toughest opponent to date this week in the form of Kilkenny college. After a long trip down in the bus Wesley didn’t seem fully switched on in the first 15 minutes of the game. This was punished by an enthusiastic and talented Kilkenny team who quickly took the lead 5-0. Their lead was swiftly doubled by another try which forced a reaction from Wesley. A nice passage of play and a clever pick and go down the blindside by Thiaboult Campbell helped Wesley close the gap. Half time score 17-5.

With the wind in Wesley’s favour the game was very much up for grabs as the second half kicked off. For 15 minutes there was very little separating the two sides and both teams missed out on great opportunities. Despite Wesley’s best efforts Kilkenny’s speed of play and athletic backline soon began to poke holes in the Wesley defence and Kilkenny extended their lead considerably in the last ten minutes. A tired defensive performance in the last ten minutes contributed to a final score of 43-5. An unflattering score line and a wakeup call for this talented team.

The U14 Blues were unlucky to lose their game in the dying minutes of their match against Kilkenny College. It was Kilkenny who started strongly, going into a 10 point lead after 15 minutes with two well worked tries. Wesley soon settled and countered with an excellent try by Jonah Nathan after a searing break from the half way line.  Jonah also calmly slotted the conversion to leave the half time score at 10-7 to Kilkenny.  Kilkenny college scored another try quickly after half time pushing into to 15-7 lead. But Wesley wouldn’t give up and countered with 2 excellent tries from Conrad Anwyl and Callen Pattison. This put Wesley into a 19-15 lead with five minutes to go. Wesley dug deep and defended stoutly. However, the pressure from Kilkenny eventually told and they scored the game winning try in the last minute of the game.

20-19 to Kilkenny at the final whistle but Wesley can be proud of their efforts particularly in the second half and will learn much from this game.

The U14 whites made the long journey down to Kilkenny college lead by captain Zach French Hanley. Wesley started the game great with a try from Sam Bowling and Axel Roulston with two excellent conversions from Lucas Strong. However Kilkenny wouldn’t lie down and got a well worked try from their pack. After some tough defending from Kilkenny Lucas strong finished a try with some excellent footwork. Kilkenny then against the hill got two tries with conversions to make the game level. With five minutes left in the half off a scrum Wesley with a set piece move landed another try before the break from Zack French Hanley leaving the score 26-19.

After the break Zach the captain lead from the front and got two tries early on followed on with another try from from Joshua Ellis to leave the game 36:19. Meanwhile Kilkenny began to string a few passes together and momentum was with them playing downhill and with the wind. Kilkenny would never give up and as the game progressed even with another try from Lucas strong and conversion Kilkenny a managed to claw it back to 46:46. With five minutes to go Wesley were under pressure and gained some territory in the Kilkenny half. With some good feet work from Zack and Fionn Mcglynn, Axel grounded a try followed up with a pressure kick from Lucas strong. With two goal line kicks under pressure from scrum half Matthew McCarthy Kilkenny managed to get a try however missed their conversion to finished with a big win 53:51 for Wesley Whites.

The only boys match so far this week was a notable training match for the Junior A Boys against the Irish U-21 Ladies. The boys were outclassed by a strong side, but learnt valuable lessons that they will bring to the training field now in preparation for their next league match.

Onto the girls, the Junior B team, all of them 3rd years for this week’s match, took on The High School. Wesley dominated through most of the game winning 4-0. Sophie Massey again scoring a hat trick with Niamh O'Reilly adding one to complete a good days work for these girls. 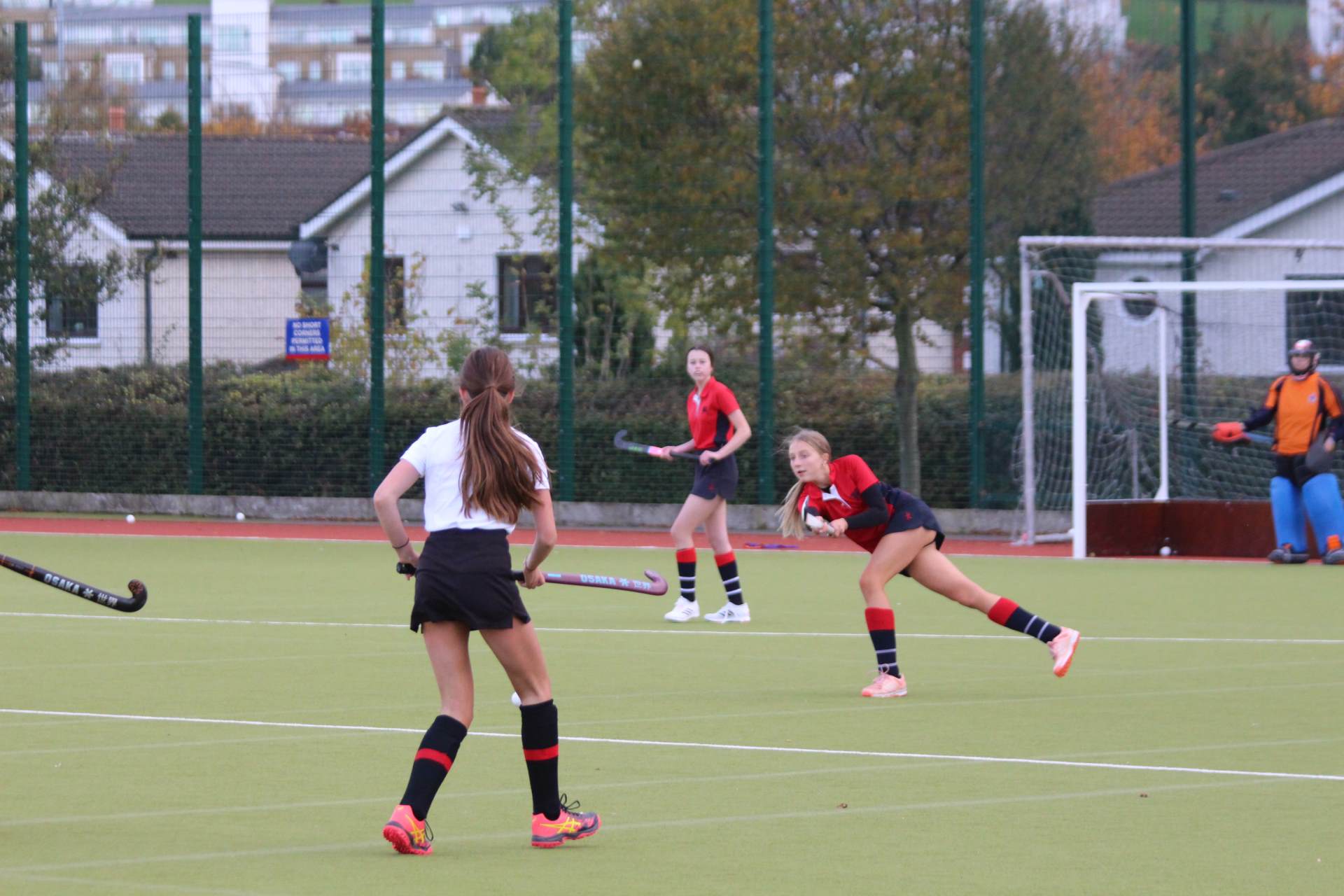 The Minor As and Cs won their match against Kilkenny College 4-1 and 3-2 respectively. 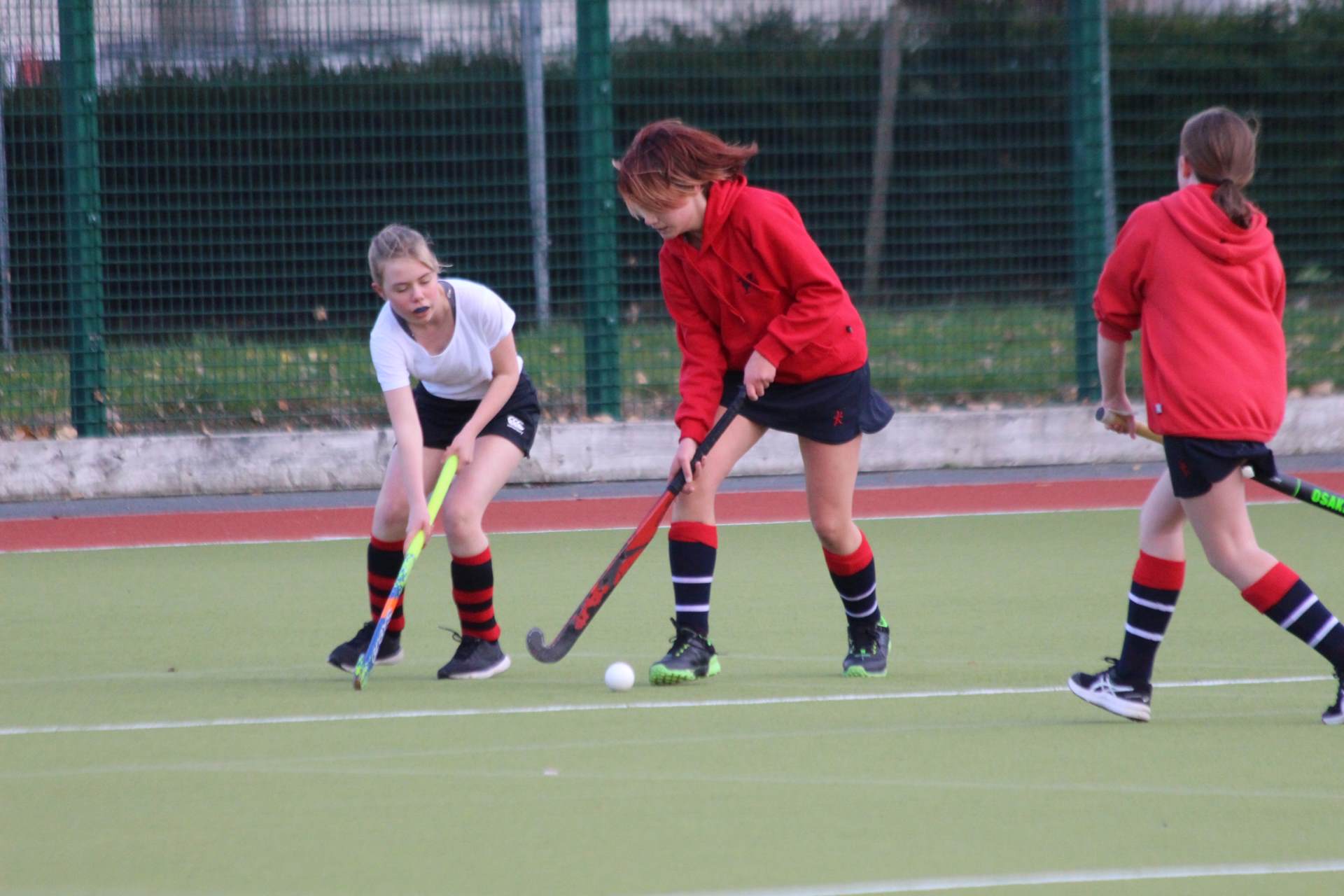 The Minor Bs had a relatively disappointing performance against Kilkenny despite the fact that they won 1-0. The girls started off well with lots of chances created and pressure sustained which led to a goal from Alice Gardiner who was just back from injury. Following this the Wesley girls took the foot off the gas and lost a bit of structure which allowed Kilkenny back into the game. The second half was very stop start and had very little flowing hockey played. Anna Delaney made plenty of good saves together with Charlene Sone Lenou making many strong tackles which ensured that Wesley saw out the win. 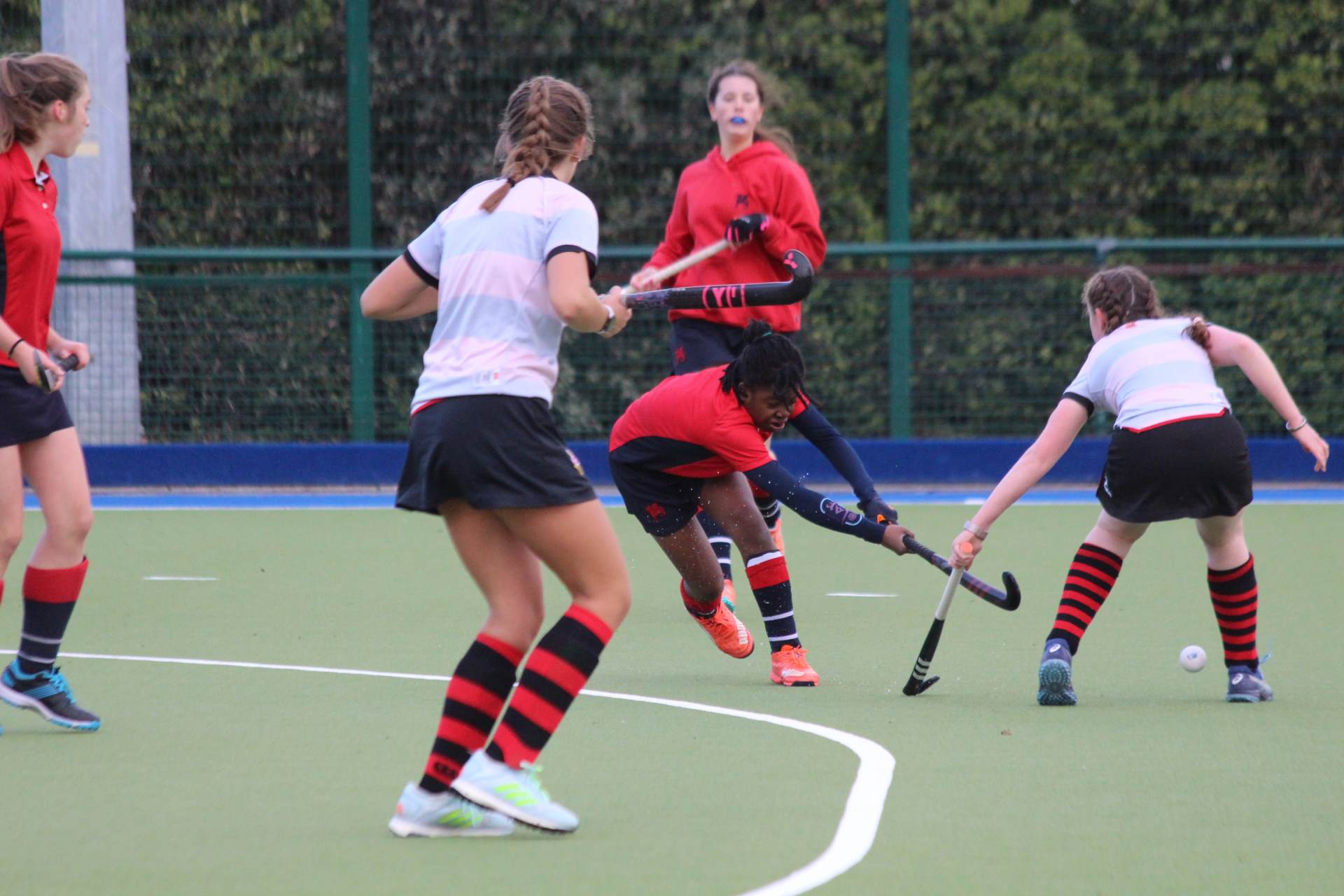 Our 1st Year B team lost to The High School A team 3-0. Although we lost we had plenty of opportunities to score but again we were kept out by some great goalkeeping. Summer Lau and Ava White in defense were dogged and made High School work hard for any opportunity they got. Ruth Ahern in the Wesley goal also made many great saves including one with her right foot at full stretch. Ashleigh Clauson ran from end to end defending one second and attacking the next. Niamh Gough too had some brilliant individual runs up front.

The C’s lost their game 2-4 while the D team also played well against a High School C team. Although the girls lost 3-0 they created a lot of chances and were very unlucky not to score with The High School goalkeeper getting in their way and making great saves to keep Wesley scoreless. Emma O'Donnell and Eve Small in particular linked up well with their team mates to create many of these chances. 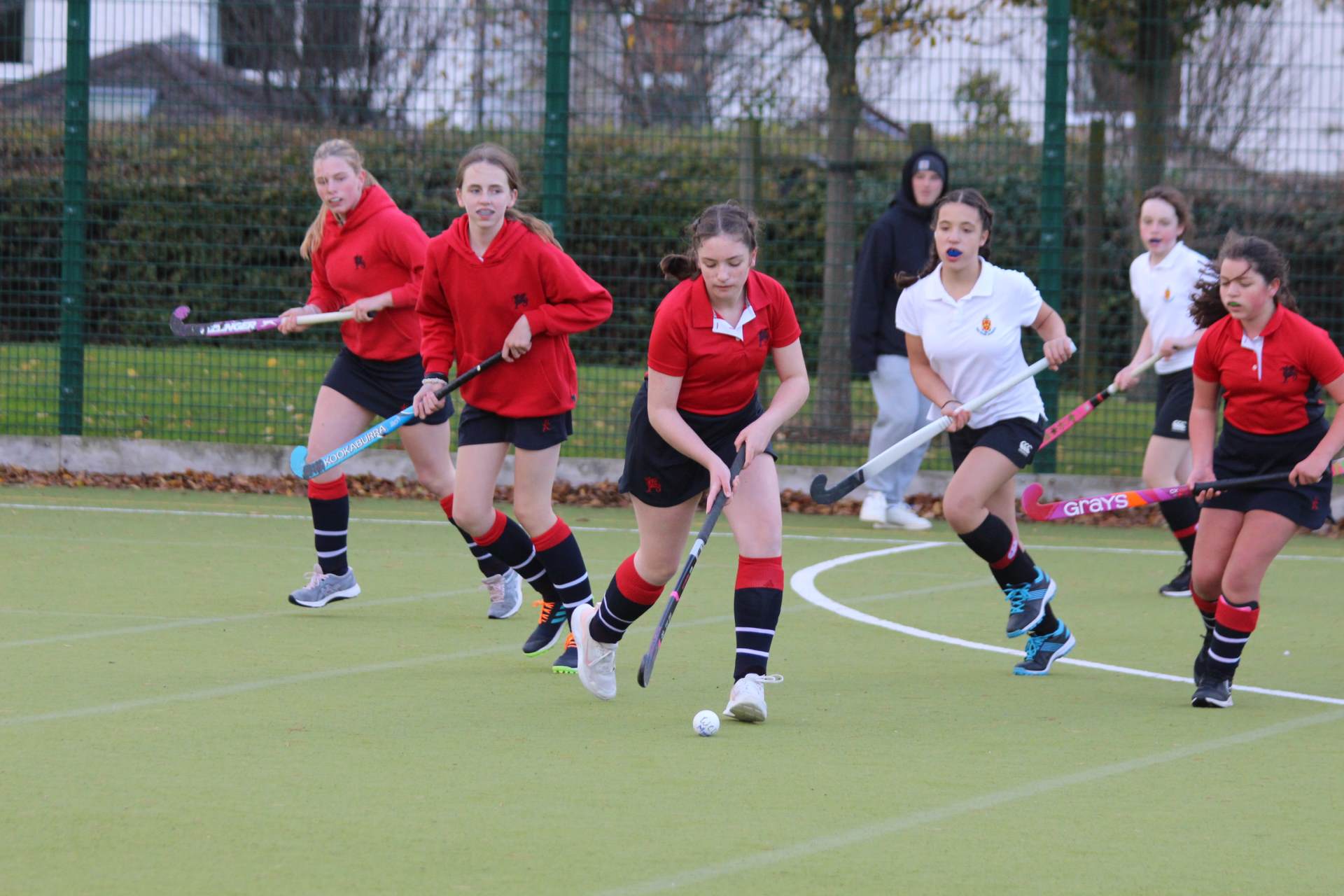 1st Year and Preps vs The High School Gallery