Leinster Cross Country
In what were atrocious conditions on Wednesday 16th February, 15 students competed at the Leinster Schools Cross Country in Santry.
Evelyn Kwik and Zach Sidebottom ran in the minor races, the Junior boys team competed strongly in a very tough field, and the Inter-boys team ran fantastically, qualifying for the All Irelands held in Belfast in March. The individual runner performances were rewarded by winning silver in the overall team event. Check out the photos below. 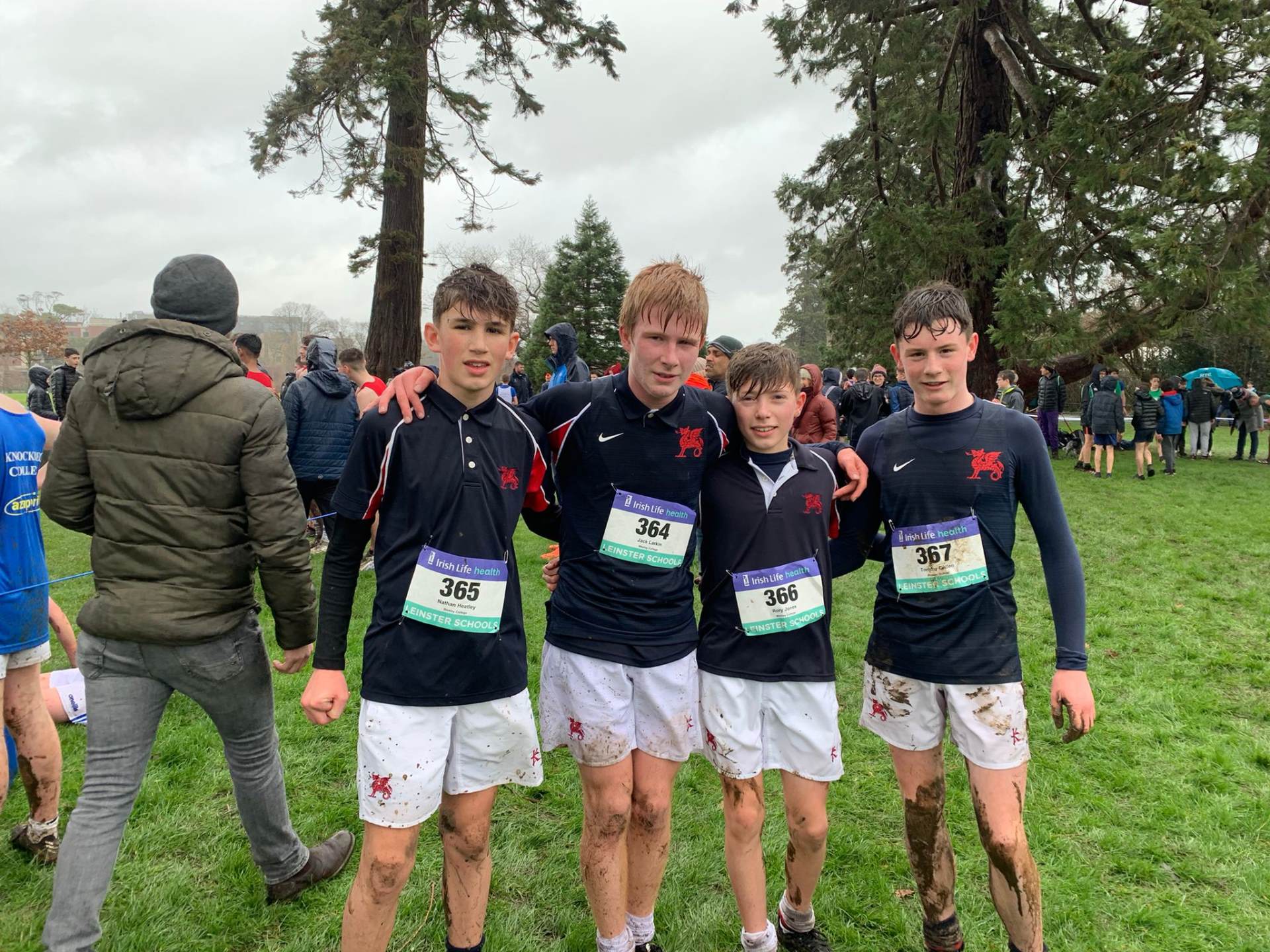 On Wednesday, the U14 A Girls played in a round-robin against Mount Sackville, St. Colmcille’s and St. Mary’s Naas. Unfortunately, they lost overall. However, a great day was had by all.

A huge win for Junior A Boys last Tuesday, as they came out with a score of 7-1 against Sutton Park. Well done.

On Friday, the Junior A Boys had a tremendous win over Sandford Park, coming away with a final score of 9-1. Well done.

U13 A Boys won their match against Newark Comprehensive School 2-0. Friday's cup quarter-final saw our team face off against a strong Newpark side. We managed to hold more possession, make more circle entries and win more corners. 2 goals was a bit disappointing considering the number of chances. However, a good, well-deserved win nonetheless. Work to be done before the next round, but the lads are excited for what’s to come.

Last Saturday, the Senior 1 Girls had a tremendous game against The High School, Rathgar coming out with an end score of 4-1.

Junior B Girls won 6-0 against The High School, Rathgar. The girls played their final group stage game of the season against the only other team in the group with a 100% record. We knew it would be a tough game but the girls put in their performance of the season, scoring 6 excellent team goals to top the group and set up a semi-final later on in the month. The defence set the platform keeping another clean sheet, while the girls played some lovely attacking hockey to make it 3-0 at halftime. They didn’t take their feet off the gas scoring another 3 goals to add to an already great team performance. Many thanks to Anna Delaney for stepping in goals for us and playing up an age group. Goalscorers: Ruby x2, Melissa x1, Sophie Massey x1, Niamh x1, Millie x1.

Minor B Girls won 5-0 against Holy Child Killiney. The Minor Bs best performance of the year came this morning against holy child Killiney. Great determination was shown by everyone throughout and along with this determination came composure to play great passing hockey. Rachel Reed was the standout performer with unbelievable skills shown and a great goal scored. The rest of the goals came from Emily Barrett, Juliet MacNally and two from Rebekah Bennett Murphy. This great performance sets us up nicely for our league playoff next week!

The U13 A lost 0-2 to Muckross. This was a tough match for the girls, they faced a very clinical Muckross side and did very well to deal with the pressure throughout but ultimately Muckross were consistently strong and came out on top! Definitely a great match to have had and the girls learnt a lot from it!

The U13 B lost 0-1 to Muckross. Tough game for the girls this morning, saw them start brightly and have a few early chances thanks to good work from Ana Montgomery, Muckross started the second half stronger and won a couple of corners which were saved well by Ruth, unfortunately, they scored a short corner with 2 minutes to go and went on to win the game. Well done all.

U13C drew 2-2 against Sion Hill. The girls didn't start how we would have liked, with two quick goals from Sion Hill, we were down by 2 after 15 minutes. for the rest of the first half, we dominated and kept the ball in Sion Hill's half, but they defended well, and unfortunately, we couldn't get any reward from any of our pressure. The second half started the way the first had ended, we kept the ball and kept applying pressure. It wasn't until the last 10 minutes that we finally got rewarded, Eve Small with a well-taken goal, then we finally got the equalizer in the last minute of the game with an excellent goal from Holly Allison. The girls showed great perseverance and desire to get the draw after a poor start and should be very proud of themselves.

Unfortunately, the U13 D Girls lost 1-2 to Sion Hill. They put in a great fight and are looking forward to their next game.

On Wednesday, the U13 B Girls won 3-0 against Holy Child Killiney. A great start to the League for the first year girls today, they braved the cold and the wind to produce a really strong performance which deservedly lead to a 3-0 win, in the first half it took some great defence from Tess and some fantastic saves from Ruth saw us keep our 5 corners in a row. After braving this storm the girls went straight up the other end with Annalisa scoring a flick. The second half began with a goal from Niamh Gough and late on Alice scored a great goal to seal the result. Well done to all.

U13 C Girls won 3-0 against Kilkenny College. The girls came out to play with great enthusiasm despite stormy weather to play a travelling Kilkenny College side. The Wesley team took a while to settle into the game but as soon as they did they grew with confidence and it was shown through their gameplay. The first half was a strong performance from the girls, with brilliant attacking runs from the forward line that put Kilkenny’s defensive line under a lot of pressure. They went into the second half 2-0 up and definitely as the stronger team but Kilkenny fought hard and grew into the game more and more causing some difficulties for our defenders that they ultimately handled very well. Although under more pressure than the first half Wesley continued to press the Kilkenny team well and won many short corners, this eventually led to another goal to finish the match off, 3-0.

Unfortunately, U13 D Girls had a tough game against Kilkenny College, losing out 0-6. Lots to work on in training over the coming weeks.

On Thursday, the Minor B Girls lost their league playoff against St. Andrew’s College by 1 v 1s. They gave it their all and played brilliantly.

The U13 A Girls won 3-1 against Holy Child Killiney. Wesley faced a strong Holy Child Killiney side in a brilliant match where some great hockey was on show. Wesley started strong with an early goal finished by Lucy Gibney, this allowed the girls to settle into the game and allowed them to pass the ball around with confidence. Holy Child caused several issues for the girls though with their quick plays and managed to level the score from a goal gained by some great counter-attacking play. Wesley continued to maintain most of the possession for the first half which led to a second goal from Abby Pennefather. They started the second half 2-1 up but the pressure from Holy Child grew and the defensive line had lots of work to do and the team managed not to concede any more goals. Wesley secured the win with a final goal from Evelyn Kwik. Wesley had a great game and showed how much they have progressed over the season.

The U13C continued the First Year Girls success on Thursday and also won their match against Holy Child Killiney, coming out with an end score of 2-1.

On Friday, the Senior 1 Girls played Holy Child Killiney. Our final league match saw us take on cup winners Holy Child Killiney. In a bright start to the game, Wesley took control and saw our pressure result in a PC goal from Mikayla. We continued to control the first half but didn't convert the pressure into any more goals. The second half was an ugly spectacle. Miserable conditions, mocks, TY work experience and the pressure of the match-all began to take its toll. We didn't play our best hockey but did enough to secure the win and march onwards to a league semi-final on Wednesday the 2nd.

Wesley Red team lost out by 0-20 against a physically strong Newbridge team. Newbridge was able to cope with the tough conditions better than Wesley. Honourable mentions for Thiabult Campbell, James Beattie and Cailean Pattison who all tried very hard.

Wesley started well attacking with the wind in the first half. They were almost at the line and then got turned over by the Newbridge defence. Newbridge seemed in control for the rest of the game scoring 3 tries and one conversion finishing 17-0 to Newbridge. Overall, a tough contest in some terrible conditions.

Wesley whites had a competitive run out against a very strong Newbridge side in miserable weather conditions. Despite being behind a gale-force wind Wesley battled hard but unfortunately lost out by three tries. Good for Wesley on the day were Alister Weld, Andrei Trif, James Sloan Rafferty and Logan Moffett all trying hard.

A day that will live long in the memory for those that attended and took part as the Wesley Senior Rugby team produced a performance that was fitting of the occasion to beat a strongly fancied Roscrea in the cup in front of a great Wesley crowd. Wesley came out of the blocks early and took the game to Roscrea and eventually capitalised on their early dominance with Aaron Lowry crossing for a try. The game ebbed and flowed until Kameron Moran spotted a gap in the Roscrea defence and darted through for a great score which Johnny Cazzini converted. Roscrea came back and scored a try of their own before play was halted for a long time due to the unfortunate injury of Captain Dan Campbell who we all wish the best for with his recovery. Wesley then finished the half the strongest with a penalty from Cazzini after another good spell of attack.

The second half was always going to be a challenge to maintain dominance but apart from some strong periods of play from Roscrea combined with some excellent defence it was largely a half that was controlled by Wesley with some great attacking rugby resulting in a try for Oran Handley who was exceptional on the day. Not to be happy with that Wesley pushed for the final score of the day which was scored by Jamie Fish under posts to top off a wonderful day for the players and supporters alike. It is hard to mention any individual standouts from the game as it was a real team effort across the board and epitomised Wesley's close-knit bond as a squad. They now look forward to a Quarter Final in 3 weeks’ time. Check out the photos below. 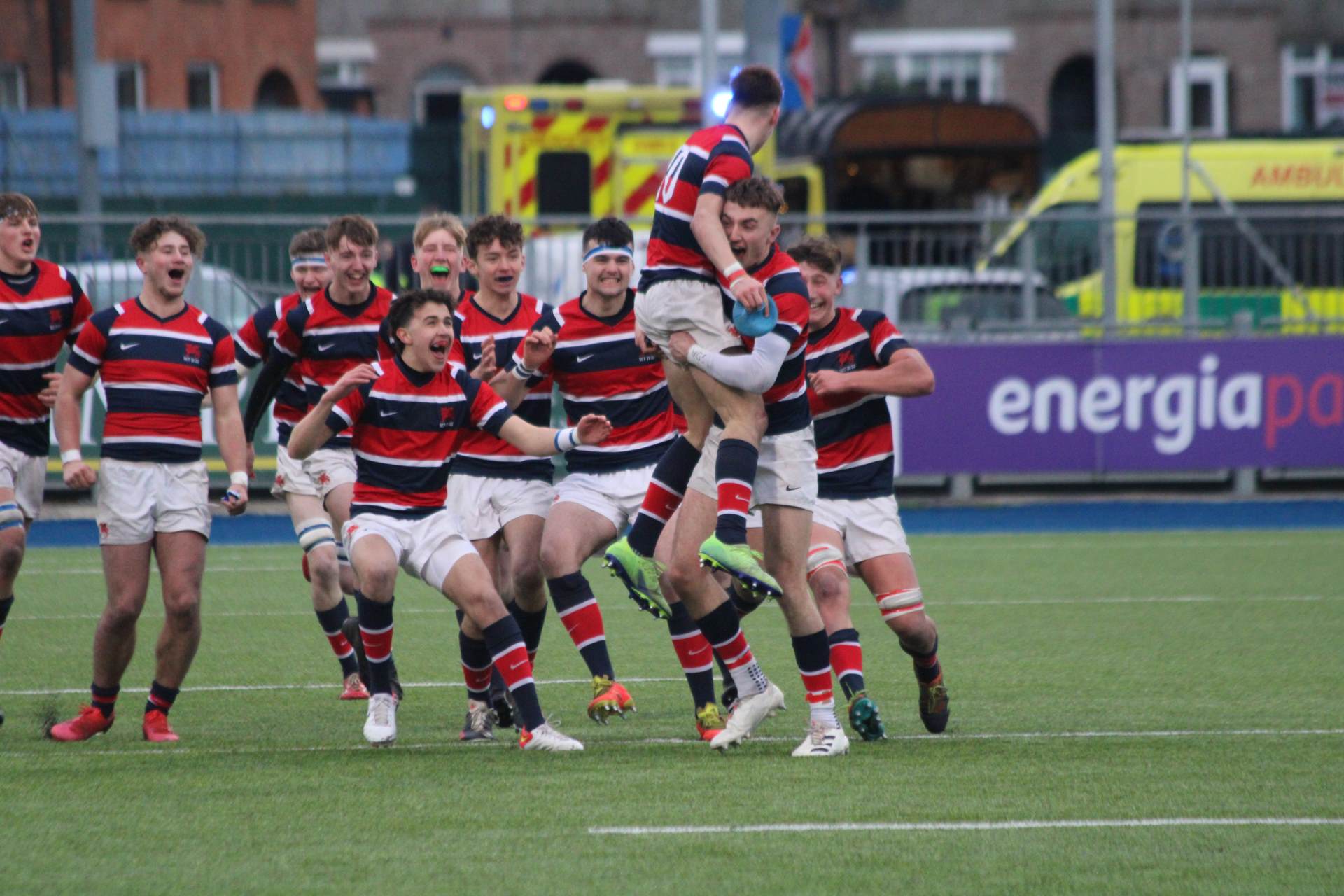